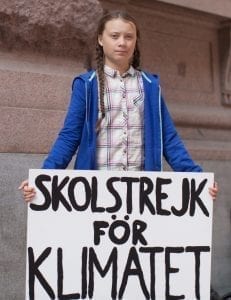 Los Angeles, CA – The issue of climate change has been globally discussed after a 16-year-old girl led millions of young people in protest against the government’s failure to react to climate change. The rally, which took place last week, led her speech with a powerful question:  “How dare you?” She wanted the youth to start deeply questioning world leaders on a Climate Action Summit held in New York.

The Swedish girl, Greta Thunberg, showed her anger by saying, “We will be watching you!”

“You all come to us young people for hope,” she continued. “How dare you?! You have stolen my dreams and my childhood with your empty words, and yet, I am the lucky ones. People are dying, People are suffering. People are dying. Entire ecosystems are collapsing. We are at the beginning of the mass extinction, and all you can talk about is money and fairy tale of eternal economic growth. How dare you ?!” Greta said to the world leaders in a sobbing tone.

Greta, at the first global climate strike, was alone at the very beginning to fight with the worsening climate. Now she has ignited millions of young people, especially students, to protest on the streets around the world, demanding urgent action to cope with the climate crisis, NPR reports.

The ongoing protests, also called Global Climate Strike, was held during the week of September 20 to 27. The appeal is to urge those who are holding the world’s highest seats in the office to take the climate crisis seriously, with the goal to end the use of fossil fuels by 2030. According to the official website, millions of young school strikers from more than 150 countries have been leaving classrooms every Friday to show their determination to catch the attention of their politicians and domestic businesses. Greta is just one of them.

Data from BBC demonstrated that hundreds of millions of people would be jeopardized by the end of this century, as the continuous growing sea levels and its acidification.

It is also being proved that climate change has been an inevitable cause of increasing mental disorder cases. According to APHA (America Public Health Association), there are more than 40 million people suffering from mental disorders in the United States. Among them are victims of natural disasters that face an increased risk of PTSD, anxiety, depression or even suicide.

Besides all these devastating influences of the climate crisis, Greta and 15 other children with similar ages have filed documentation to the U.N., of which they were complaining five countries–German, France, Brazil, Argentina and Turkey—for not enforcing their obligation to curb the emissions and help alleviate the crisis.

“How dare you continue to look away and come here saying that you are doing enough when the politics and solutions needed are still nowhere in sight…How dare you pretend that this can be sold with just business as usual and some technical solutions?” Greta asked.

Above all, the teenage activist spoke up at the U.N. convention at the climate session, that “This is all wrong. I shouldn’t be up here. I should be back in school on the other side of the ocean.”