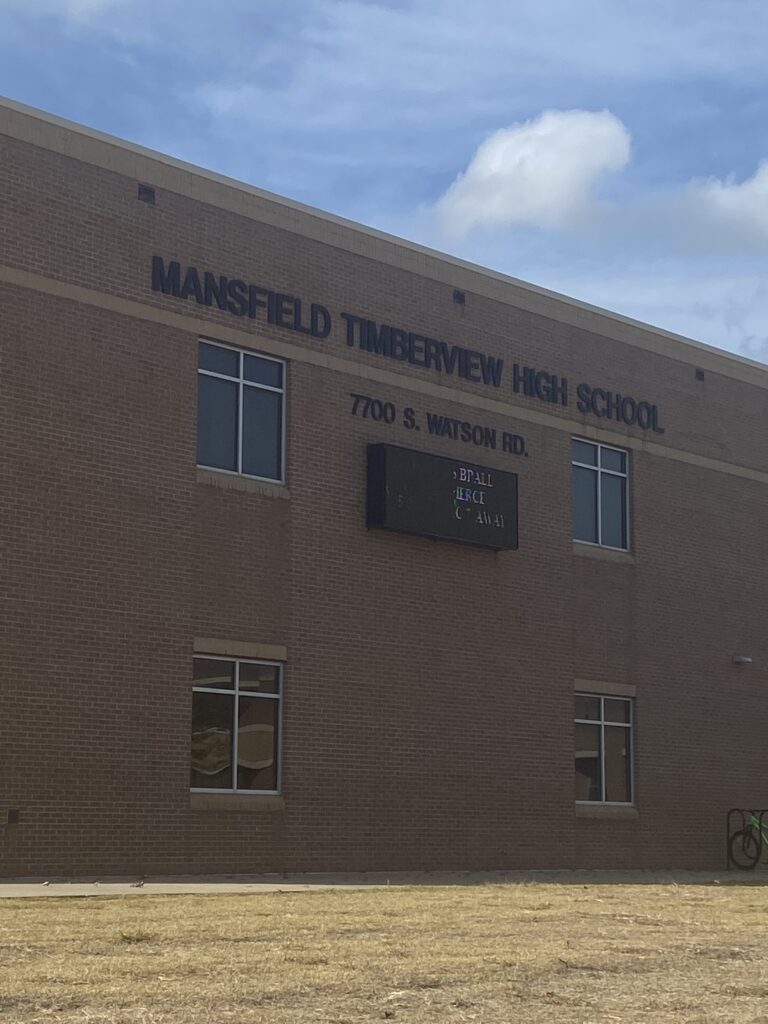 A Community Grapples with Safety After Another School Shooting

(ARLINGTON, Texas)- In what has become a common scene, students run in every direction and then wait and hide. Parents wait anxiously outside the school to be reunited with their children. Mothers are crying, and fathers are in panic, with their kids are trapped inside.  On October 6, Timberview Highschool in Arlington, Texas was in lockdown from an active shooter threat.

The shooting followed more than 100 such incidents involving gunfire on school grounds, according to the Dallas Morning News which cited statistics from Everytown for Gun Safety. According to WFAA, four people were injured that day, and the suspect was charged with aggravated assault with a gun.

At the town halls, parents have criticized the Mansfield Independent School district for not doing enough to protect students. The city of Arlington continues to implement a safety plan, and the Timberview shooting case is still unfolding.

KRLD News Radio reported that a fight between two students prompted the shooting. The suspect, according to police, was 18-year-old Timothy Simpkins,  who was taken into custody and charged with three counts of aggravated assault with a deadly weapon, the news outlet reported.  Police said Simpkins got into a fight with a 15-year-old student and shot at the student and a teacher, and another student was grazed by a bullet resulting in three injuries. Simpkins’ attorney was contacted by The Click but has provided no comment.

Since the shooting, the city of Arlington has been picking up the pieces and evaluating school safety in the city.

On Oct. 14, Mansfield Independent School District (ISD), which includes Timberview High School, announced heightened security measures which included random classroom checks for weapons and a  designated district staff member to monitor “high-traffic and common areas” in schools through its video surveillance systems. These measures were added to its existing safety protocols that list five actions for schools to take in the event of an emergency: secure, lockdown, evacuation, hold, and shelter. The safety plan also includes the evaluation of a potential threat.

“For all the parents and other family members who received text and phone calls…. I want you to know other members, and I share your feelings,” said Newsom.

The purpose of the meeting was to go over safety and security following the shooting. Parents voiced their frustrations at the meeting, especially since students could not contact their parents during the lockdown for safety reasons.

Many parents like Latoya Maytubby, the mother of a junior at Timberview Highschool, told The Click she was not surprised that there was a shooter at the school.

“The way things have been going there have been a lot of fights,” she said. “ I think they need to be doing more to protect the students like implementing a clear bag policy and metal detectors.”

Sonia Lagunas, a parent to a freshman and junior shared a similar sentiment.

Many parents believe that the school simply isn’t doing enough to keep their children safe. Andrea Chavez, the mother of a 2-year-old, has a younger sister who goes to Timberview.

“I feel like school safety should be increased. The whole experience hit me a lot because I could have lost loved ones,” she said. “I believe the school system should pay more attention to the student’s social media,” she added.

“I want to keep my babies safe, and what is happening right now makes me question their safety. They are both still in elementary school, but it terrifies me,” she said.

Some parents view the situation differently. Lauren Radcliffe, an Arlington resident debating whether to send her 3-year-old stepson to public school, said the shooting is not really a factor in her thinking.

“I honestly wasn’t shocked. I feel like a shooting could happen anywhere, I don’t feel like my stepkid would be any safer not going to school. We are honestly more likely to be shot at Walmart,” she said.

The city of Arlington is continuing to regroup after the trauma. Students directly affected are still recovering from the incident. Daniel, a Timberview senior who declined to give his last name, recalled what happened that day.

“People were just scared and running around like, ‘What is happening?’” he said.

“I was right next door. I wasn’t that scared. All I remember is that everyone was running,” he said.

Staff and students were very reluctant to give information. All of the teachers that were reached out to refused, and only a few students were okay with being interviewed.

In addition, board members and council members told the Click statement had to be cleared by their information department. No board members returned calls from The Click seeking comment.

“We will implement technology to increase surveillance of activities on school grounds, school safety is not just our problem; it is everyone’s problem,” said the police chief.