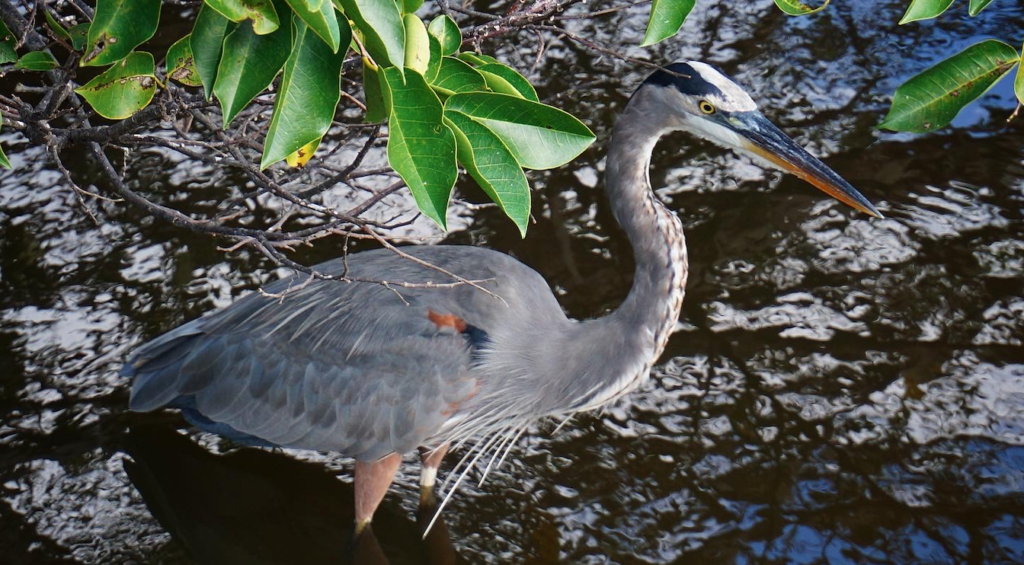 A Great Blue Heron, native to coastal Southern Florida, wades in the water at the Wakodahatchee Wetlands [CREDIT: Photo courtesy of Tj Marten]

In 1896, a set of railroad tracks ripped through the pristine pinewood forests of Miami, opening the floodgates for opportunists eager to profit off the appeal of tropical paradise. Now a major international port and globally renowned tourist destination, the area’s natural ecosystem has changed dramatically.

Native wildlife species have fled their habitats, making room for towering hotels and trendy nightclubs. Protective wetlands are destroyed in the name of agricultural expansion, and scrubs and sandhills are decimated as housing developments move at an assembly line rate. 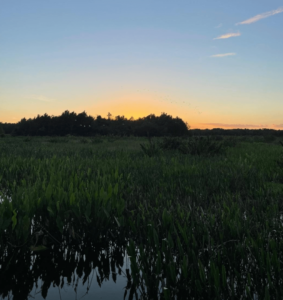 Home to one of the most diverse ecological landscapes in the country, South Florida is facing major environmental challenges resulting from excessive demands by an ever-growing population and development groups seeking to exploit critical wetlands for profit.

On Aug. 20, Florida’s Department of Environmental Protection (DEP) submitted a request to the federal government for ownership of wetland permits in the State 404 Program, currently controlled by the U.S. Army Corps of Engineers. Residents in affected areas and environmental groups are rallying against the state’s request, while others, including Gov. Ron DeSantis, are showing their support. Whichever agency controls these permits will be the gatekeepers for projects surrounding valuable wetland areas like the Florida Everglades. 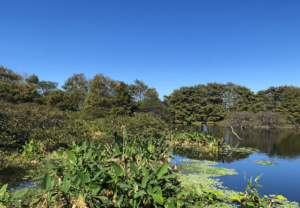 Florida’s wetlands are like nature’s kidneys. They’re an important resource that contributes to stabilizing bodies of water, helping filter out pollutants, and controlling flooding. The Florida Everglades, just southwest of Miami, encompasses vast mangrove swamps and freshwater marshes that provide habitat for a variety of native plants and animals, in addition to acting as a protective buffer during storms and hurricanes.

The Everglades is also notorious as the epicenter of Florida’s extensive loss of wetlands due to humans mishandling the delicate balance of water flow, creating and connecting channels to feed into nearby sugar cane farms. For years, an agricultural runoff was polluting the waters without anyone taking notice, making them uninhabitable for dozens of threatened species.

With the DEP commissioning for permit control, conflict is rising at the local level when it comes to weighing the crucial checks and balances between protecting sensitive biological ecosystems and servicing Miami’s growing population and bustling economy.

On Oct. 21 and Oct 27, the United States Environmental Protection Agency (EPA) held virtual public hearings regarding Florida’s request to assume administration of a Clean Water Act Section 404 Program. Over 100 people attended, the majority speaking out against Florida’s request for the federal government to relinquish its powers.

Drew Martin, a member of the Conservation Committee of Sierra Club said at the hearing, “Numerous environmental groups oppose this. We see no evidence that the DEP could adequately take over wetland permits. We see no ability from staff, no ability from funding. We only see things getting worse.”

Many opposers have cited the DEP’s shortcomings, including their past performances, perceived allegiance to developers, lack of resources, and allegedly inadequate environmental diligence when issuing permits.

Eric Hughes, a former EPA employee and current Florida resident, said during the meeting, “I’d be shocked if less than one percent of permits were denied by the DEP. That’s not protection.” Another resident, Marjorie Lorand, spoke out at the same meeting saying, “The rules the DEP has in place do not protect the interest of the public but favor the permit applicant.”

Critics claimed the DEP’s application was incomplete, failing to identify which waters specifically will be affected and which species will be protected. Opposers worry that the DEP is ill-equipped financially and too understaffed to take on the new responsibility, especially considering budgetary reevaluations having to do with the state’s management of the pandemic. Many Floridians see federal-level inspection as essential to balancing the interests of the public with construction permitting in wetland areas.

Environmental policy manager Amber Crooks spoke on behalf of the Everglades Coalition during the Oct. 27 hearing, saying, “In the face of increased growth and development, the protection and restoration of the Greater Everglades is better accomplished by maintaining current federal oversight.”

On the other hand, those in favor are defending the DEP’s ability to effectively streamline permitting while maintaining environmental preservation efforts. The DEP’s justice council, Justin Wolfe, argued during the hearing that the agency’s assumption of the program would receive dedicated resources in the form of over 200 wetland scientists and professionals across the state.

“The DEP’s intimate knowledge of state aquatic resources coupled with the efficiency and proven success of its own wetland permitting program will ensure implementation is executed in a scientifically sound and protective manner,” said Wolfe.

In working with the DEP, Gov. Ron DeSantis announced in January of this year that the historical purchase of 20,000 acres of Everglades wetlands, originally slated for oil production, will now instead be permanently protected.

Jonathan Bulley, an Environmental Department Manager at GFA International, an environmental and geotechnical engineering consulting firm in South Florida, told The Click, “We work with the DEP to manage contamination sites and they are definitely well-qualified. I’ve always had a pleasant experience working with the DEP, and they’ve been reasonable in balancing the environmental risk and the need to develop the land.” said Bulley.

In Miami, a fast urbanization rate and unceasing high-rise construction have contributed significantly to population growth, according to the World Population Review, which recorded an increased annual growth rate of 1.62 percent and a 21.76 percent increase over the last 10 years.

The Miami Downtown Development Authority boasts “extensive and diverse living options, arts and food scenes and other major projects transforming Downtown Miami,” reads an introductory excerpt on the organization’s website. Meanwhile, more new projects are in the works. The Waldorf Astoria Hotel and Residences has touted itself as the new tallest tower in Miami’s Biscayne Bay, at a staggering 1,049 feet high. Renowned architect Jean Nouvel is promising an eye-catching honeycomb structure with waterfront views; and the recently finished, 50-story palm tree-inspired Brickell Solitair offers hundreds of rental units, retail, parking, and plenty of amenities. The list goes on.

With urban development drawing in more folks than ever, Miami’s growth is felt even outside the city as affordable housing projects and road expansions are constructed on the fringe of swamps and agricultural land is expanded to meet growing population needs.

In 2013, the Florida Department of Transportation, District Six, submitted a Wetland Evaluation Report for construction of Miami Dade’s Krome Avenue corridor, which is a major north-south rural roadway located just 700 feet east of the Florida Everglades.

While the primary objective of the project was to address safety deficiencies, the secondary objectives included providing “additional capacity to accommodate anticipated future area travel demand,” according to the submitted evaluation report.

A survey done by the U.S. Fish and Wildlife Service (FWS) reveals that Florida’s average annual loss of wetlands was greater than 72,000 acres during the 30-year study periods, totaling 1.74 million acres. Losses were concentrated in the Everglades region of South Florida. According to FWS, many of those losses can be directly attributed to agricultural development. 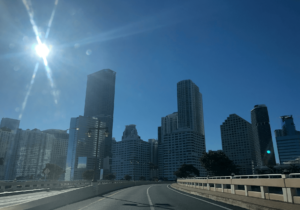 The FWS reveals associated environmental effects, including pesticides found in fish that are part of the Everglades food chain, as well as changes to the South Florida landscape that have altered the area’s natural water flow and undergone a significant level of degradation as evidenced by extensive algal blooms, seagrass die-off, detrimental flooding and serious losses of mangroves.

“The cons far outweigh the pros for wanting to fast-track a permit,” said Albert Gomez, a citizen of Biscayne Bay. “This is setting us up for failure in the long-run.” Another resident of Miami Dade, Kyla Beretto, said, “It’s horrendous to see all this development in our wetlands. Just living here and observing what’s going on around me makes me worry. We have so much development and traffic already, and it seems politicians are only interested in developing our counties, not protecting the environment and animals that live here.”

Mismanagement of the Everglades valuable wetlands has been a growing issue over the last decade. The areas amassed environmental problems are given a band-aid treatment with controversial Wetland Mitigation efforts, which developers can utilize to restore or create wetland preservation projects to compensate for the ones that are bulldozed.

“I’ve seen the destruction of our environment over the past 10 years, especially. Funding the DEP is at the discretion of Florida politicians,” said Florida citizen Tom Nucky. “I’m pleading with the EPA, along with other residents, to deny this request.”

Water is the lifeblood of Florida and the population size has a direct impact on the area’s water management. Permitting must be closely monitored to ensure that the environmental impact is properly evaluated. The EPA is expected to deliver a decision this December, regarding whether the federal government will retain control of wetland permitting or give it to the DEP.