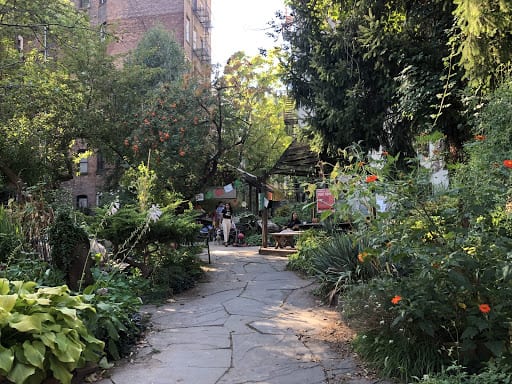 From the outside, the 6&B Garden looks like a tiny corner garden with a few bushes. But once you step inside, the city noise seems to disappear and you become surrounded by plants, crops, and flowers.

Mexican Treats in a Manhattan Oasis, Courtesy of Kid Chefs

Inside the 6&B Garden. (Credit: Adrienne Magun)

NEW YORK— Alphabet City is always bustling on the weekends with brunch crowds, children riding bicycles and couples running errands. But nestled in between these busy streets lie little community gardens—one of which is located on the corner of 6th Street and Avenue B.

Not only does this particular garden offer a green and quiet timeout from the city streets, but it also hosts a free children’s program called the 6&B Garden Kids Cooking Workshop. Here, city kids spend the summer planting, harvesting, cooking vegetables and learning. On Sunday, September 15, the program celebrated Mexican Independence Day and taught the children how to cook chilaquiles.

“It’s really joyful. It’s so beautiful to have kids in the garden,” said program coordinator Briar Winters during the celebration. At the beginning of the summer, the workshop teaches the children how to plant and care for crops and, once a month during the summer, they meet to harvest those crops and cook a meal.

To celebrate Mexico’s Independence Day, they learned how to make chilaquiles and corn from one of the participant’s grandmothers. Chilaquiles is a traditional Mexican dish made with tortilla chips, salsa and cheese. The children picked tomatoes, peppers and corn, then together cooked up a storm for the community. Anyone who entered the garden that day had the opportunity to try this tasty treat and join in on the fiesta. 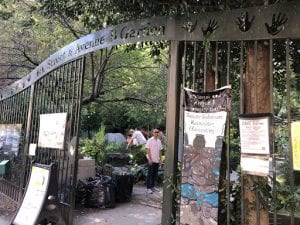 Entrance Gate to the 6&B Garden. (Photo by Adrienne Magun)

From the outside, the 6&B Garden looks like a small corner garden with overgrown bushes and trees. But once you step inside you enter a 17,813 square-foot, lush garden devoid of scenes common to a city filled with eight million people. The garden is home to plants, herbs, fruits and vegetables. In addition to the children learning to grow and cook food, there are people sketching, reading, picnicking, and meditating.

The 6&B Garden members, officers and board of directors maintain the garden and run the programs themselves. According to the 6&B Garden’s website, the garden came into existence in the early 1980s after the city demolished the buildings that previously stood on the lot. Throughout the 1980s, the city wanted to build a parking lot where the garden is currently located. Later, the city planned to sell the lot to developers at an auction, but members of the community fought to keep the garden open.

To defend their plot of land, members organized their first Corn Roast and Harvest Festival by forming alliances and partnerships with several neighborhood organizations. The garden began hosting artists’ events, performances and children’s gardening programs. The 6&B Garden became such a crucial part of Alphabet City that the city decided to keep the plot. In 1991, the garden came under the wing of a 501(c)3 not-for-profit organization.

Twenty-eight years later, the 6&B Garden still hosts various fundraising events to maintain the garden and continue their programs like the Kids Cooking Workshop. Their next big fundraising event is the Harvest Festival, which will be held on Saturday, Oct. 5, from 2-7 pm.