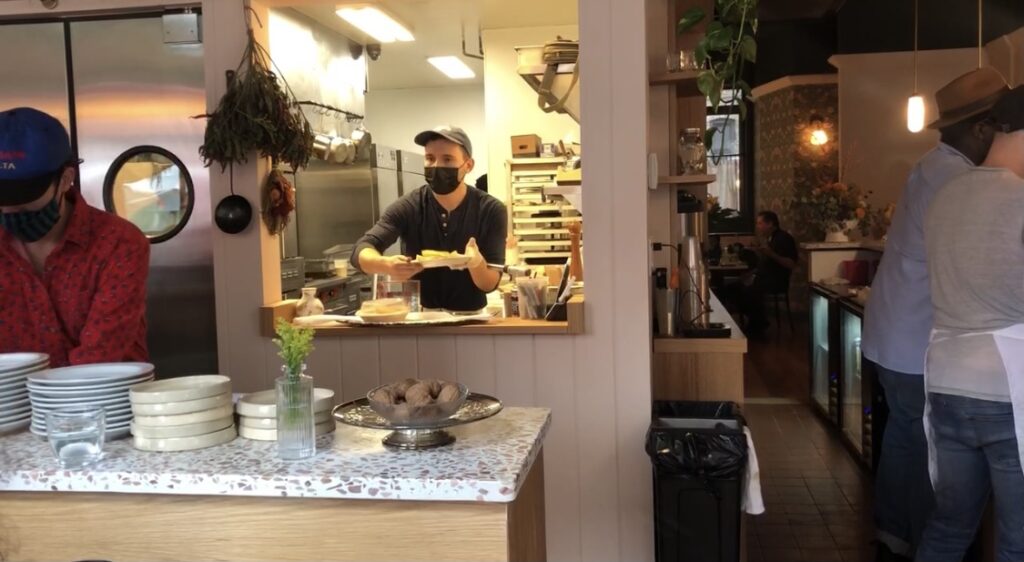 Brooklyn Restaurant is Ode to Chef’s Jewish and Hungarian Heritage

BROOKYLN, NEW YORK— November 8, 2021 marked the opening week of a new all-day breakfast, lunch and pastry counter located at 818 Franklin Avenue in Crown Heights. Agi’s Counter is a childhood dream come true for chef and owner, Jeremy Salamon. “When I was eleven, I started peeling potatoes in a country club kitchen and never stopped from there,” he said. Salamon attended culinary school and has worked as a chef in Manhattan for nine years.

After being laid off from his job at The Eddy in East Village, a restaurant which closed down due to the pandemic, he was more determined than ever to start his own place.

The concept for Agi’s Counter was inspired by his 94-year-old grandmother, who shares the name Agi. She fled from Hungary in 1956, went to Austria and then came to America. As a result, his grandmother’s recipe collection became a lovely melting pot of Jewish and Eastern European classics, pairing eggplant parmesan with goulash, and palacsinta – a Hungarian crepe, with a veal cutlet or steak Diane.

“My grandmother is someone who overfeeds you. She always shared her culture and heritage with us and she’s a big proprietor of knowing where you came from to know where you’re going,” Salamon said.

While opening a restaurant is never easy, opening a business during a global pandemic has been particularly challenging. Salamon faced supply shortages for building supplies including lumber and metal kitchen prep tables. The silverware he ordered got lost at sea and local vendors have turned him away due to a shortage of drivers that are simply stretched too thin.

Despite the challenges, Agi’s Counter has been transformed into a charming new local eatery. The restaurant’s two countertops offer high stool seating and the cozy banquette in the back is set against a vintage-inspired floral wall paper. Salamon and his team got their interior art deco design help from Ilonka Karasz, a Hungarian-American textile designer who also works as an illustrator for New Yorker magazine covers. Family photos are another crucial element that add character and meaning to the space.

On the menu is a mashup of Eastern European dishes including a variety of sandwiches and durans (open-faced Austrian sandwiches) like the pork Leberkase with fried egg and the “Ritsy-Titsy” with poached buttermilk chicken, valdeon bleu cheese, herbs, and pickled grapes. From the bakery are favorites like Ferdinand Buns, Pineapple Upside Down Cake, Sacher Torte, and Hungarian Donuts. Coffee, lattes, and cappuccinos are also available. Salamon plans to expand to dinner and a wine bar in the new year, featuring a full Hungarian wine list—a rarity in New York.

“The city doesn’t have a lot of options for Hungarian food so, we are very excited about this place,” said a first-time customer at Agi’s Counter. Social media is also buzzing about the opening with posts from locals who are eagerly welcoming Salamon to the neighborhood, including an Instagram shoutout from @foodbabyny whose account boasts over 300 thousand followers. Agi’s counter is requiring in-person patrons to show proof of vaccination. They are currently open from 7 a.m. to 5 p.m.