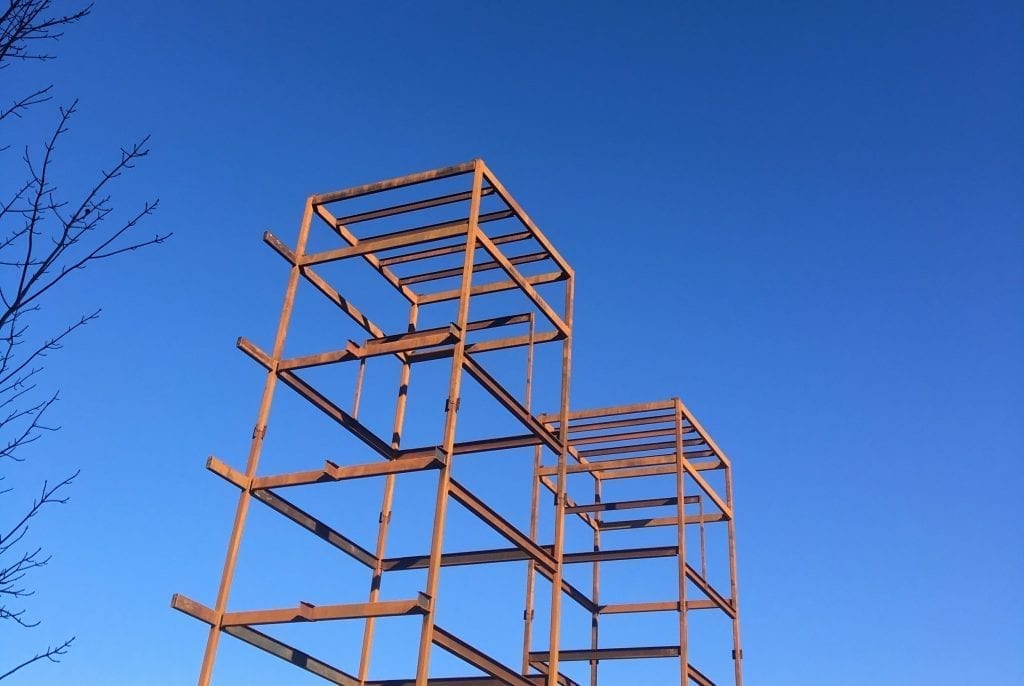 NEW YORK – For weeks the best way to find Harrison, New Jersey has been by smell.

It lingers around Harrison High whose soccer team runs drills in pursuit of their 26th state championship. The odor is so pungent that Red Bull Arena, the 25,000 seat soccer stadium that is the reason most New Yorkers visit this quiet suburb, released a statement warning game-goers not to be alarmed should they catch a whiff.

“It’s especially bad in summer,” said Marissa Carolyn, 29, a resident of one of the many luxury condos newly built to entice the crowds of soccer fans with sprawling amenities and a 17-minute commute to Manhattan. “It’s like someone spilled frying oil all over town.”

The smell has even drawn the attention of the region’s local newspaper, The Observer. There they compare it to egg and to blue cheese, nothing you wouldn’t expect in one of the town’s many bakeries that have remained barely changed since the 1920s.

Where once the smell was occasional since Hurricane Sandy made landfall in 2012, residents of this town of 13,620 people have smelled almost nothing else. It has become such a feature of life that residents pack monthly into brown carpeted meeting rooms at the Meadowlands Environment Center, to voice their frustrations.

“There are major concerns and things that we still don’t know about,” says Michael Fernandes, a soccer coach at nearby Kearny High, in the July 2018 meeting.

Resident dissatisfaction has reached such a fever pitch that a lawsuit was filed in September 2019 to spur officials to cleanse the stench. And with Red Bull Arena bringing more and more developers to expand the town, tensions are not expected to decline. The Harrison Master Plan, however, the document that for half a century has guided the town’s allocation of redevelopment budget, tells a different story, one of how the smell keeps the locality profitable.

It also gives it a name: Hydrogen Sulfide.

The Hive of Industry

A common by-product of crude oil and natural gas processing, Hydrogen Sulfide is a problem with much the same lineage as the town itself. In his book This is New Jersey, John T. Cunningham notes that in 1881, when Thomas Edison was looking to manufacture his first light bulbs, he came to Harrison for its proximity to Manhattan, plentiful workforce, and the unregulated waters of the Passaic River, where the factory could dump its industrial waste. It is that same waste, perhaps even from Edison’s long shuttered-factory, that has now become the region’s most infamous feature, Keegan Landfill.

In the 1880s, as Edison’s light bulbs sold by the millions, companies used his success as a guide for their own manufacturing. Soon Otis Elevator Company and Hyatt Roller Bearings moved in, along with more than a dozen factories: earning Harrison the motto it carries to this day, “The Hive of Industry”. 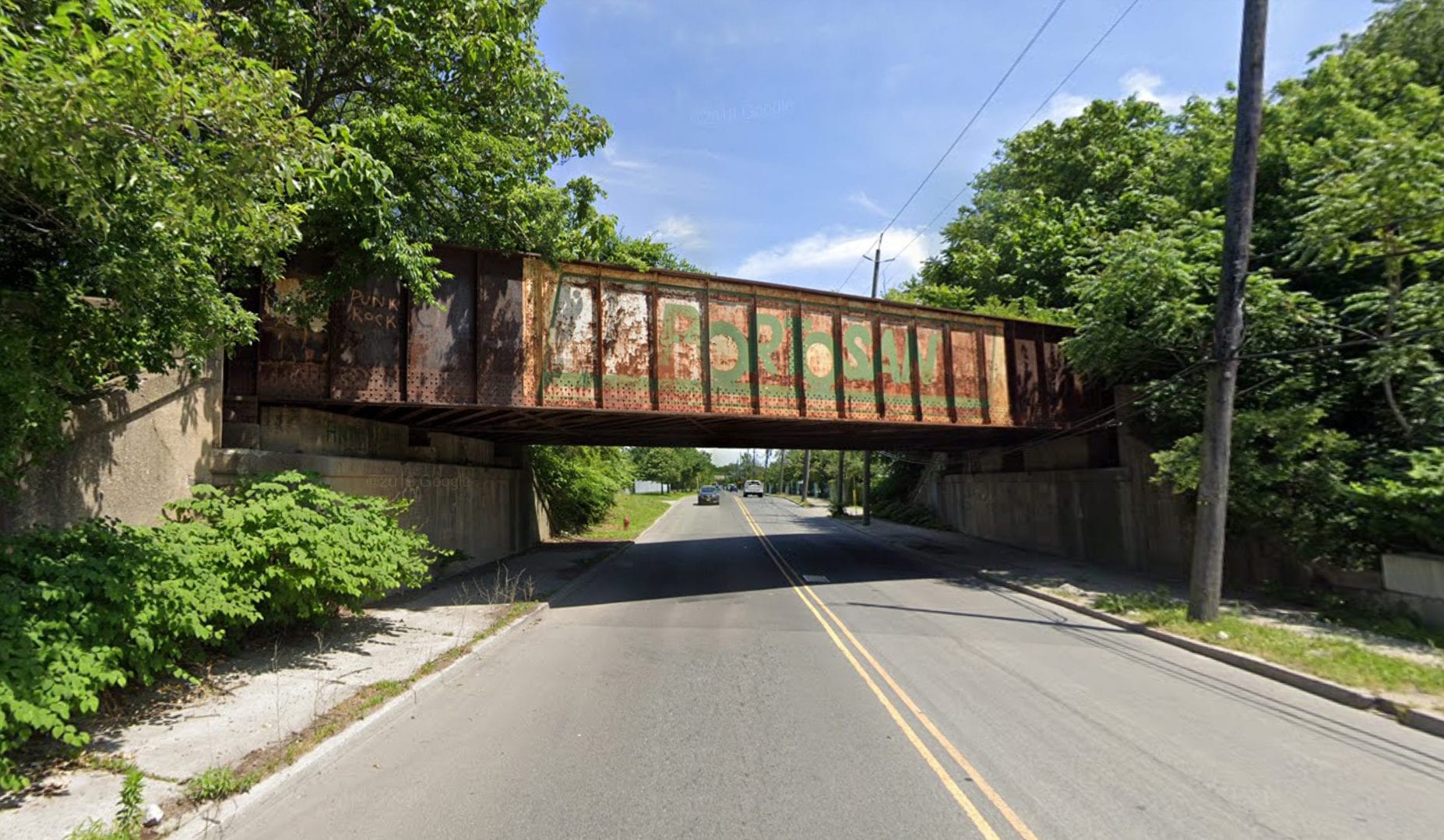 Evidence of an industrial past is everywhere in Harrison, such as in this faded ad printed onto a once busy commercial railway crossing (Credit: Zak Fleishman)

However, as industries thrived, the city population grew sicker. By 1890, Cunningham continues, Hudson county, of which Harrison is a part, had the highest instance of cholera and typhus of any other region in the United States, 27 deaths for every 1,000 residents.

The solution: landfills. Rather than dump chemicals into the rivers and streets around which Harrison’s residents lived and bathed, landfills would provide a revolutionary scheme by which industrial and household waste could be collected and brought outside of town and away from the population.

The benefits were swift. According to Center for Disease Control records, within 10 years, deaths from cholera and typhus dropped by half, reaching the lowest numbers for any state. Moreover, as its once great factories began to fail with the Great Depression, money continued to flow into Harrison as its landfills began to collect garbage not just from its citizens but from neighboring counties. 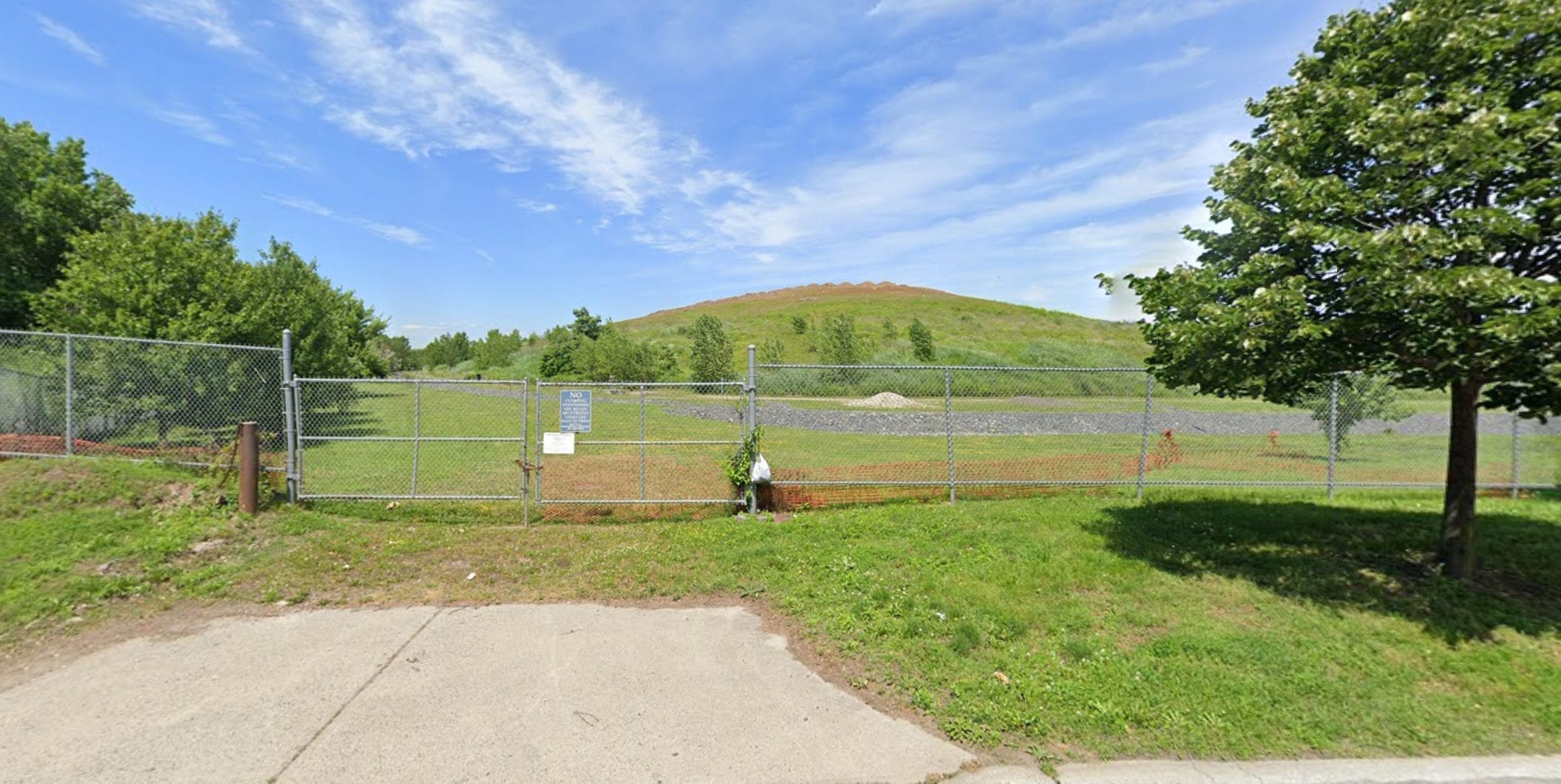 Two miles from downtown Harrison, Keegan Landfill has been generating money for Harrison since 1945. Making use of the infrastructure that once brought raw materials to Harrison’s factories, it was able to accept industrial and household waste from as far as Maine.

By 1960 the landfill had reached its peak: 110-acres wide, or roughly the size of Italy’s Vatican City. 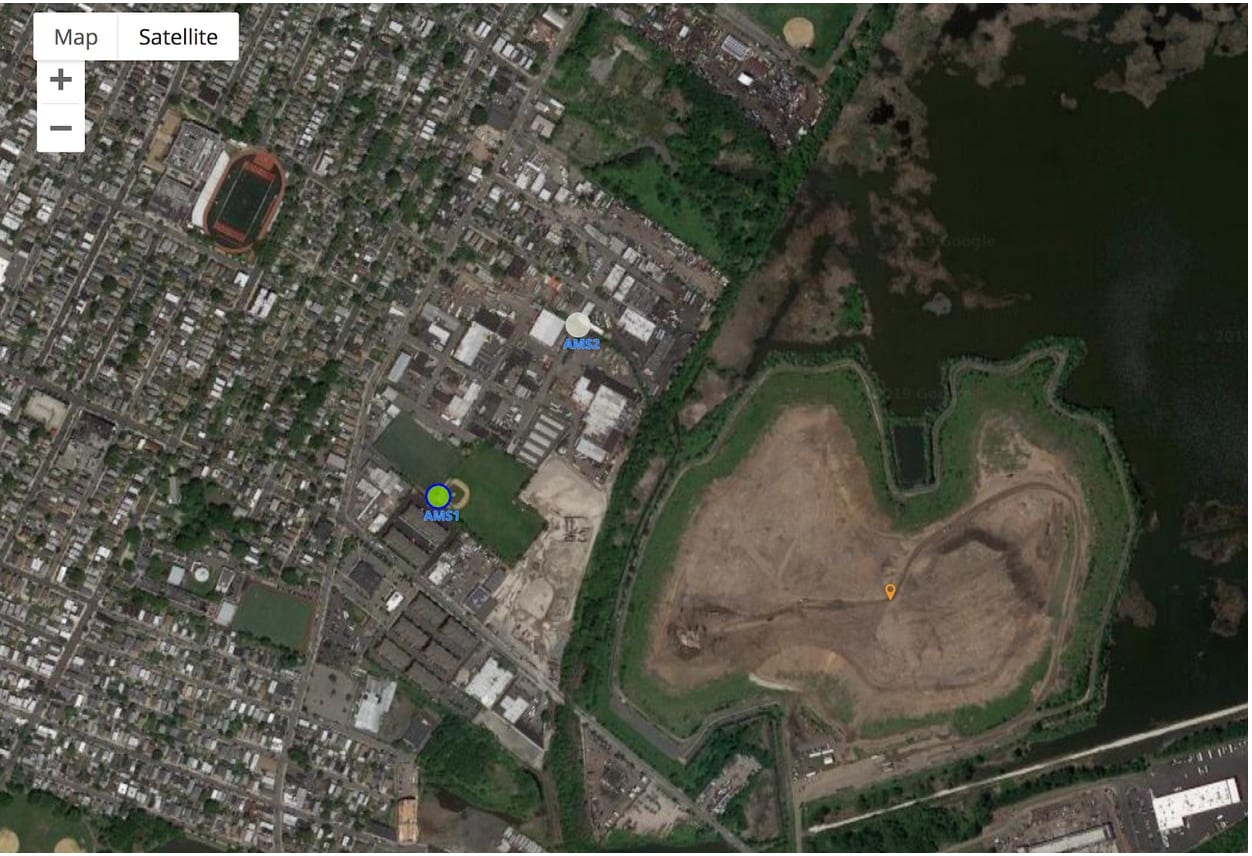 It wasn’t until Red Bull Stadium was built in 1998 that a new influx of capital reached Harrison. Patrons began to flock to the underused railway station, creating a small boom in service industries. The city’s success convinced The Port Authority of New York and New Jersey to renovate its aging PATH station.

By 2004 commuters from Newark and Manhattan lead the population to jump for the first time in 40 years. The city was again courted by industries that looked to redevelop Harrison’s vast tracts of industrial space into condos and lofts. In town hall meetings of that year, however, new residents were beginning to voice concerns about the adverse health effects of living near Keegan. 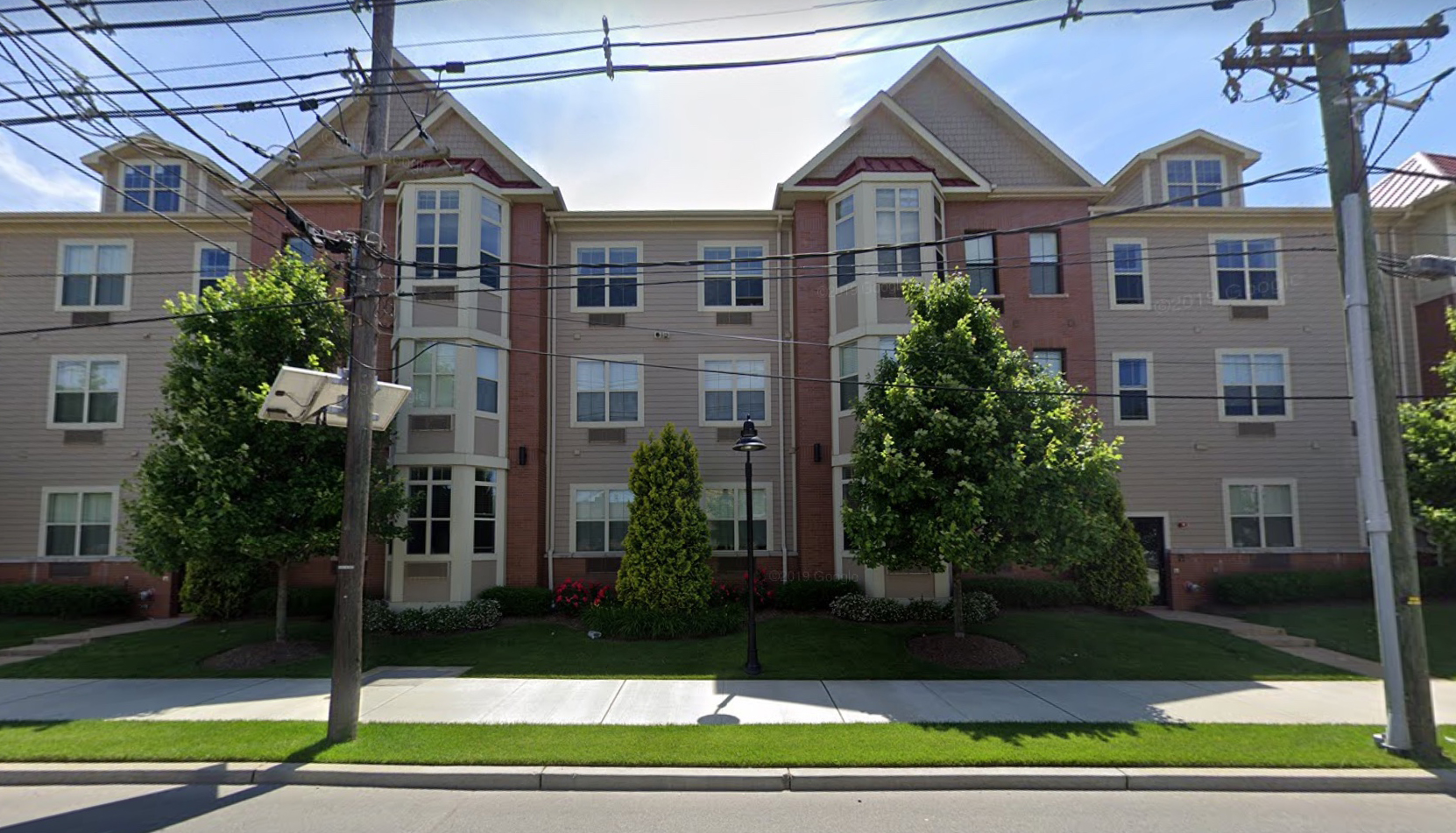 “Kearny residents have been unable to open their windows,” says one 2004 town hall testimonial about living in Kearny, the subdivision of which Keegan Landfill is a part.

Appeasing the growing turmoil, in June 2005 Keegan Landfill was sold to the New Jersey Sports and Exposition Authority (NJSEA), and slated for redevelopment.

After the hurricane hit, however, Keegan Landfill once again entered a new phase of operations. As The Observer noted in a 2015 retrospective of the site, “During the post-Sandy period alone, we took in about 100,000 tons from towns that were hit – about two-thirds more than the 340,000 tons we normally get a year, on average.”

Since that time, health concerns have only worsened. In a complaint made to the Hudson Regional Health Commission in December 2018, a health inspector investigating affected houses in the region found the smell so noxious it caused his “nose (to start) burning, stating (he was) getting a mild headache and felt a little dizzy.”

Harrison at a Crossroads

Harrison now finds itself in a battle with its past. On one side is the industrial mythos of Edison and his million-dollar hive, with New Jersey reticent to close the landfill whose profits carried it through leaner times and now contributes 12.5 million annually to state coffers. 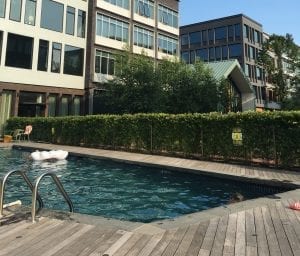 On the other side, commuters breathe life into the gleaming metal condo complexes that map out Harrison’s future. And they have a reason for hope. The September 2019 lawsuit against the NJSEA ended in victory for residents, ordering officially that the site be closed down.

However, with the NJSEA likely to appeal the decision, there is little impetus to cap the site and stop its fumes from spreading.

It could be 10 years, says the ruling, before the landfill naturally stops emitting Hydrogen Sulfide. And with more luxury condos being built along Harrison’s main streets, tensions rise with the breeze, driving soccer coaches, commuters, school children back indoors as they wait for a more fragrant reprieve.