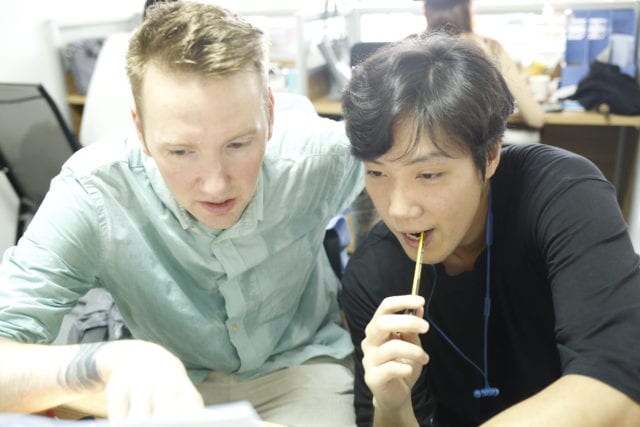 A Podcast Startup Reveals the Cainozoic Era of Entrepreneurship

Smeeth is designing his podcast slogan with his friend. Photo by Smeeth

Los Angeles, Calif. – Smeeth, a native Chinese man born in Nanjing, Jiangsu province, has never gotten a chance to travel abroad, but his podcast helps English learners in China correct their pronunciation. Since graduating from Nanjing University, he has worked as an English teacher in the New Oriental Company, a well-known ESL training organization. However, he now has a second identity —a startup leader, and his podcast show has more than 30 million followers.

When he entered the fifth year of his career, he suddenly made a decision to resign from his job, wipe out the savings he had accumulated, and start all over again as a podcaster working alone.
“I realized the sharp boom emerging since 2016 in the podcast industry,” said Smeeth. “Then one of my colleagues started to produce a podcast on Ximalaya and earned a number of followers.”

Ximalaya is a mobile application of radio business gathering podcasts in a variety of channels, including literature, history, audiobooks, news, English learning, etc, using member subscriptions as its funding model. A great amount of services is free for customers, but for those who have a specific focus, the membership provides related content.

When Smeeth shared his teachings on Ximalaya and attracted tens of millions of students around the country, he discovered the demand in China is huge. “It has sparked my idea of doing my own business as a podcaster, to teach English online, using Ximalaya as the platform,” he said.

Smeeth had never learned how to innovate ideas for a start-up business, but he had some thoughts on the market size. He finally chose Ximalaya, for one reason, because he found his target audience, Chinese citizens, had limited access to platforms such as YouTube.

Moreover, he observed data and found out that Ximalaya FM was one of the main radio applications with the most popularity. According to a report published last year, since the Ximalaya app entered the market, it gained more than 500 million users, leading the market in comparison to other apps in China.

Despite Ximalaya’s success, Smeeth believed that product quality is always the spirit behind developing any business. As a person who never traveled abroad, he is very confident with his standard English accent. “People would not imagine that I have never gone to any English countries up until now,” he said, “but it can be said without exaggeration that my English accent is as good as those native speakers.”

Smeeth said he analyzed other English learning radio programs that found success on Ximalaya FM and concluded that he could do it too, especially if he focused on pronunciation. He also realized that demand is high but the supply of podcasts with quality audio is low. “My lesson’s quality would be way better,” he said.

Above all, his vision for his business is not only to offer an English pronunciation podcast, but to build his own brand by designing an English-related Encyclopedia.