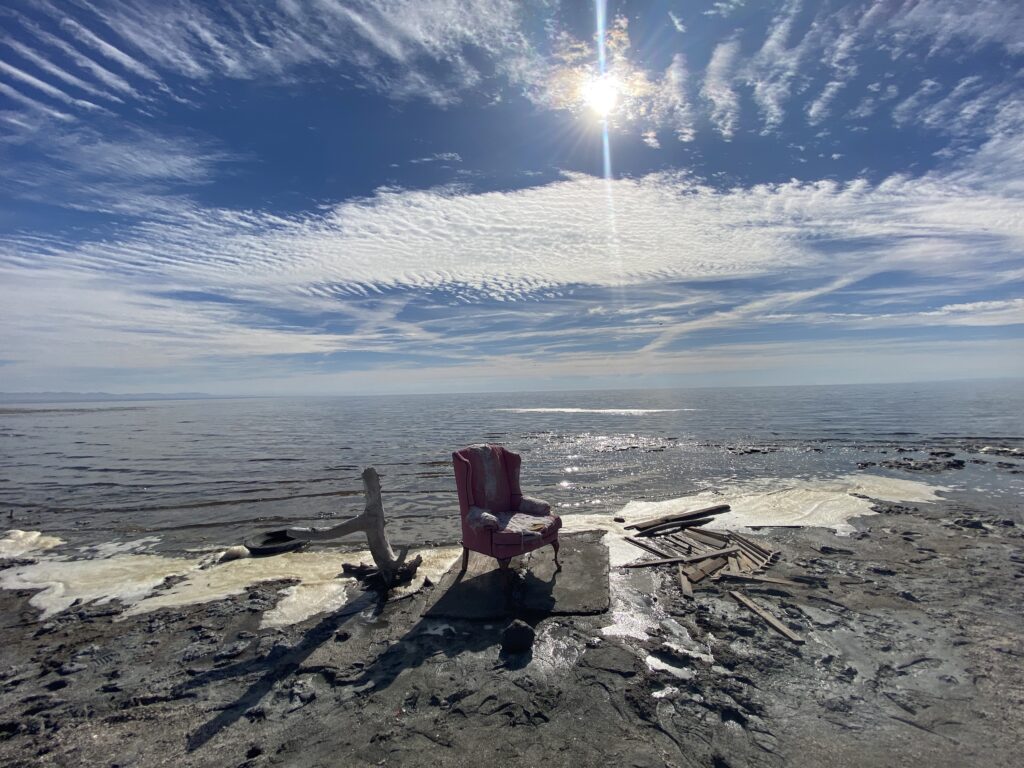 [Videography and editing by Lilian Manansala]

(SALTON SEA, Calif.)—Once a popular tourist attraction and vacation destination for Hollywood elites like Frank Sinatra, the Beach Boys, and Bing Crosby, the Salton Sea is now known for the stench of dead fish on its shores, eerie stretches of abandoned buildings and desolate beaches, and a photographer’s paradise at funky arts enclaves like East Jesus and Salvation Mountain. During its heyday in the 1950s and 60s, the “Miracle in the Desert” at times drew more visitors to its resorts and recreational activities than Yosemite National Park.

To outsiders the Salton Sea appears to be dying—an abandoned and forgotten wasteland—yet the communities surrounding it are still vibrant and alive. Immigrant farmworkers and indigenous tribes continue to build homes and raise families here. Some of their children go off to college and return with a passion to build and honor their hometowns.

But the environmental disaster posed by the Salton Sea has long been a threat to the predominantly Latino and Native American residents—60-70% of the area’s population surrounding the inland body of water.

Despite decades of state and federal government inaction, community leaders and advocates continue to bring the issues of health and environmental justice back to the table ensuring that the people who live at the Salton Sea are represented and that their voices are heard when it comes to policies affecting them. 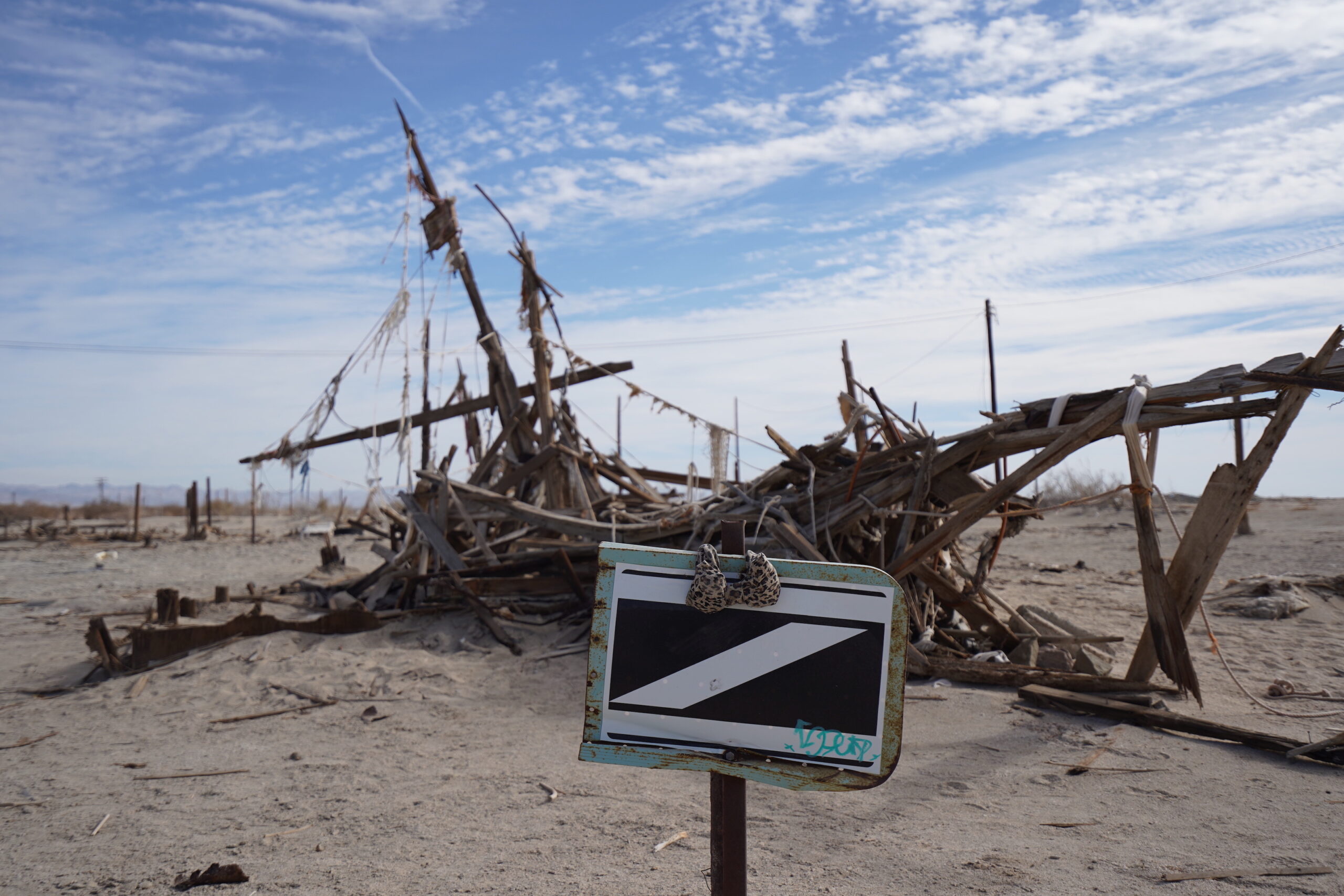 The Salton Sea sits 230 feet below sea level. With 130 miles of shoreline and an area of 345 square miles, it’s the largest enclosed body of water in California.

Technically, the Salton Sea is not a sea but a sump, an engineering mistake dating back to 1905 when dikes of the Colorado River broke flooding the low-altitude, ancient seabed. With no drainage or outlet to another body of water, the Salton Sea is the dead-end of agricultural runoff from nearby farms. Irrigation wastewater—laced with pesticides, contaminants, and chemicals—comprises 85-95% of the water coming into the sea.

As the water continues to evaporate from drought and climate change, the exposed seabed, called playa, exposes sediment and creates toxic dust storms. The dust and particulates can cause respiratory problems, including asthma and bronchitis and can worsen conditions including obesity and diabetes.

As the amount of water decreases, salinity increases—the sea is currently twice as salty as ocean water. All fish species but the tilapia have died off because of the high levels of salinity. Thousands of birds have perished in major die-offs. The hydrogen sulfide smell reminiscent of rotten eggs has reached as far as Joshua Tree, Los Angeles, and San Diego counties, up to 160 miles away. 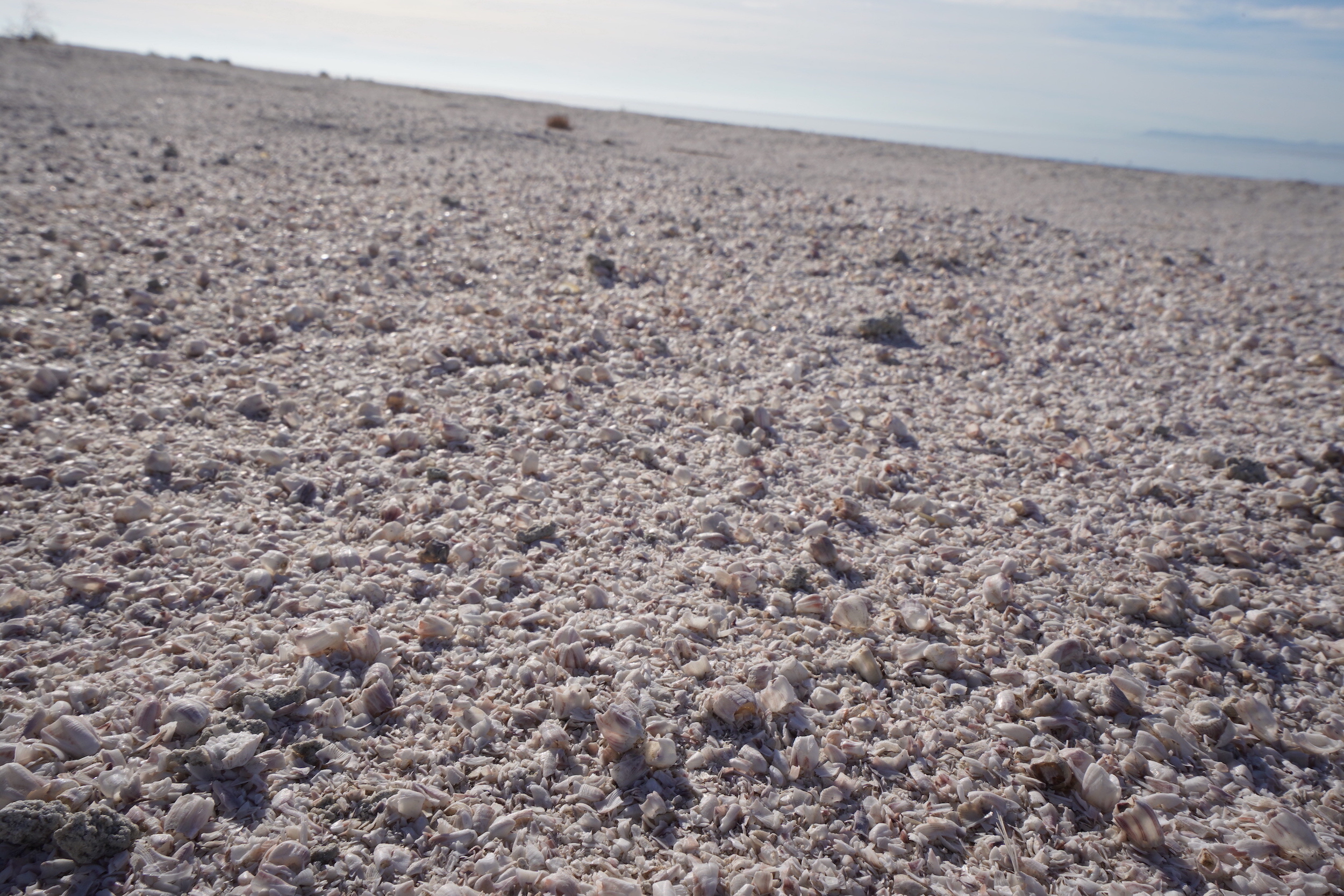 “Due to evaporation, the sea is losing about 1.3 million gallons [per year],” said Frank Ruiz, the Salton Sea program director for Audubon California, which not only monitors the avian life but also tests the water for salinity and how it impacts the food networks. “In certain areas in the south side of the sea, we see the water actually receding more than a hundred feet in less than three months.”

When Hollywood and tourism left in the 1970s, the immigrant farmworkers stayed. Approximately 650,000 residents live in the Imperial and East Coachella Valleys. It is these underserved communities whose health is most impacted by the Salton Sea.

Imperial County and East Coachella Valley are mostly composed of Latino farm workers who work in the billion dollar a year agricultural industry. If the environmental conditions at Salton Sea get as bad as scientists predict, those families will be impacted severely. For an area with children who are developing asthma at two-three times the average rate of children in the rest of California, the issue is becoming more pressing.

Researchers at UC Riverside have been studying the aerosolized particulates in the dust that, when entering the respiratory system, can cause not only asthma, but possibly cancer.

One of the aims of BREATHE is to engage directly with the residents, Lo said. “What are we learning from the community? Because they know much more about their lived experience and living near Salton Sea than we do.” 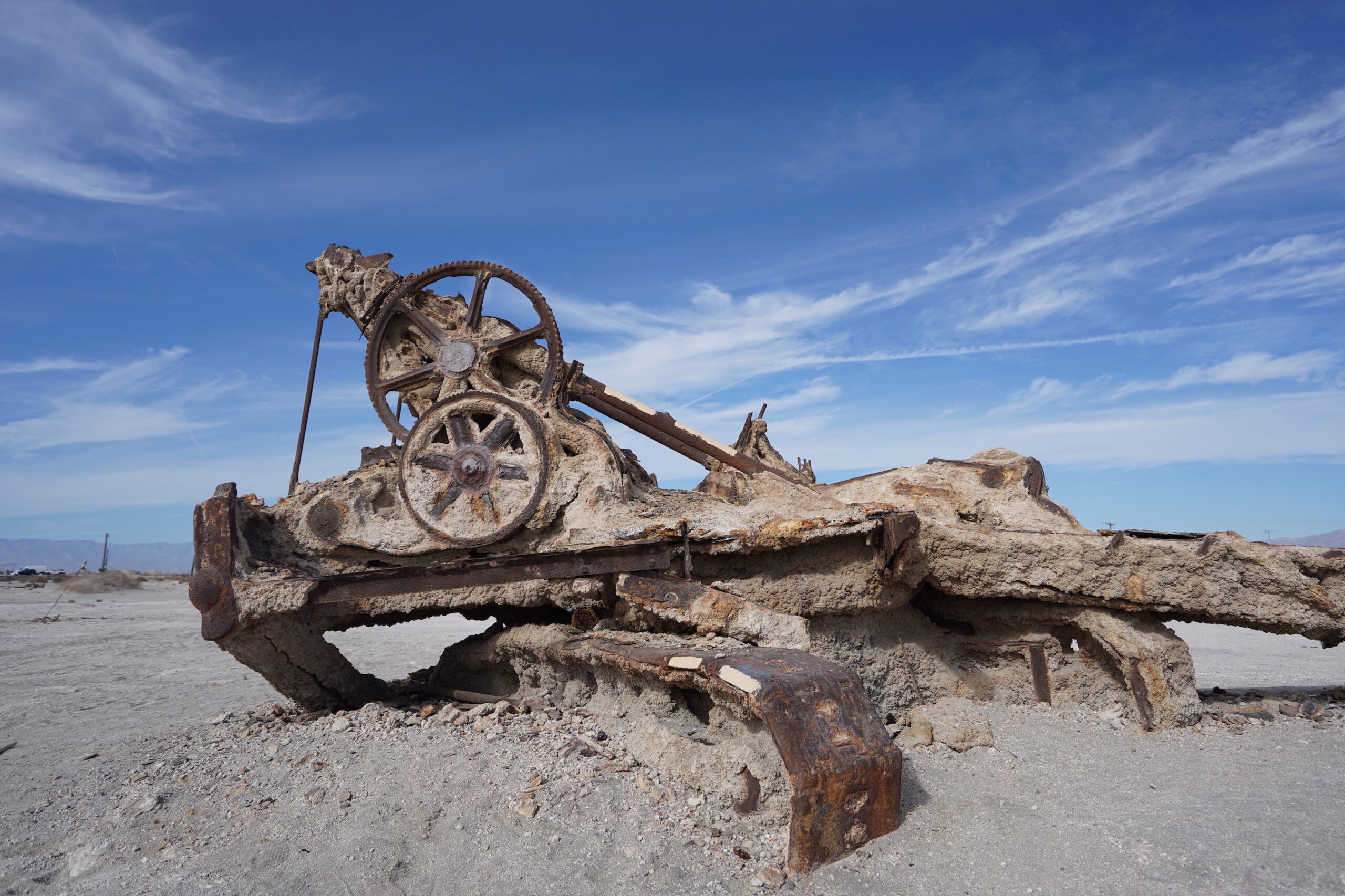 When Urban and Regional Planner Christian Mendez was a child, his parents bought a property in Desert Shores, an unincorporated town in Imperial County. Over the course of 15 years, he witnessed firsthand the receding of the Salton Sea. “I grew up walking to the edge of the sea, actually seeing it shrinking and the conditions getting worse.”

Christian’s brother Bryan Mendez produced the documentary “Estamos Aqui“(“We are Here”) which tells the stories of members of the community, interspersed with the art and music of creators and musicians. Researched over five years with production and editing taking another year, the film featured the stories of those living near the Salton Sea, so that the narratives like theirs could be heard—and part of the dialogue when it comes to restoration efforts.

“As we researched and looked into the Salton sea, we saw all these stories that were told by others that weren’t necessarily from the community.” said Olivia Rodriguez Vaquera, co-producer and writer of the film. “And one of the things that really stood out to us was that most of the stories had a negative light to it, like, ‘Oh, it’s abandoned, it smells’, which are true to some extent but we also felt like a lot was missing.” 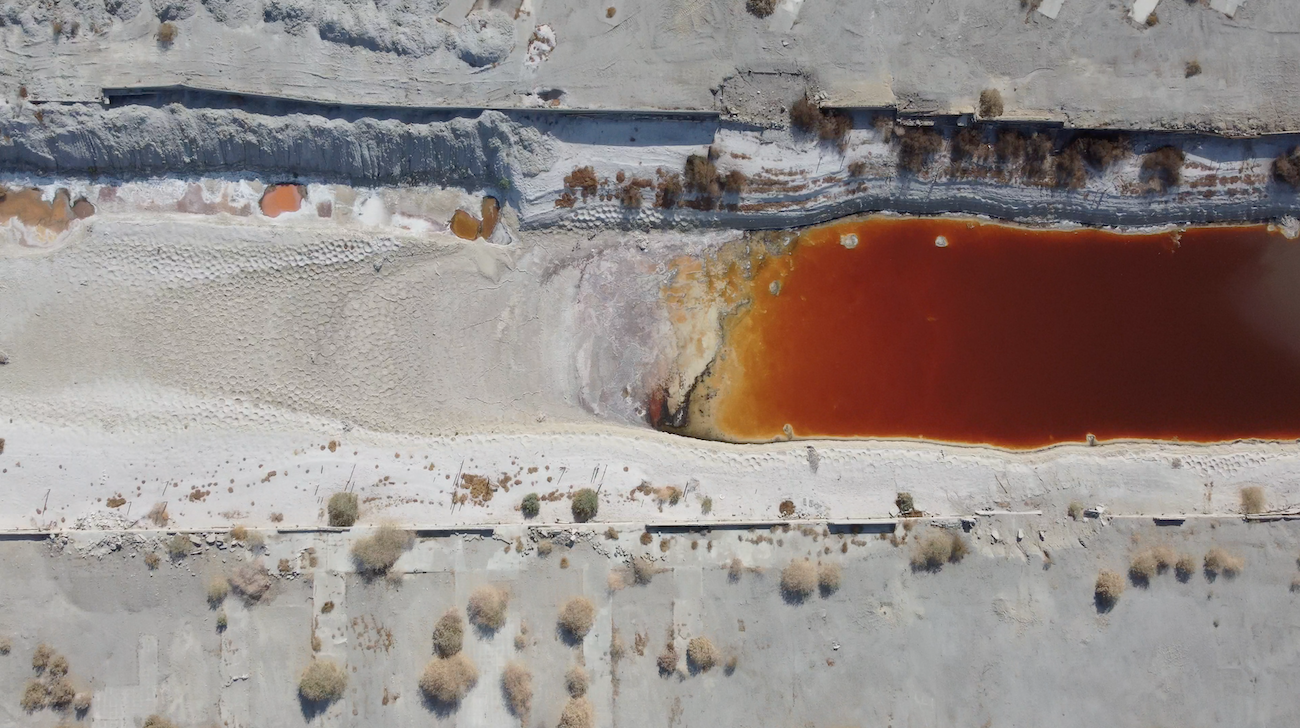 A channel showing where the water used to reach in Desert Shores [Credit: Lilian Manansala]

Vaquera majored in history at UC Berkeley and got her masters in public policy at Loma Linda University. Since returning, she is now the program coordinator for Youth Leadership Institute‘s Que Madre Media, a space for young women ages 15 to 25 in the Eastern Coachella Valley with a focus on mental health through storytelling.

“There’s also beauty here, despite what’s going on,” Vaquera said. “There’s a lot of resilience here. To say it’s abandoned is ignoring and erasing any communities that currently live around it and are impacted by the environmental injustices in the Coachella Valley.”

As a little girl growing up in Thermal next to the Salton Sea, Vaquera had respiratory conditions including asthma and tuberculosis. She would often be rushed to the hospital. Doctors would advise her parents who were field workers, “When you pick up your child, [first remove] all your clothes, take a shower,” because, it was surmised, that the dust and pesticides from the fields were contributing to the immigrant children’s high respiratory cases and frequent nosebleeds. 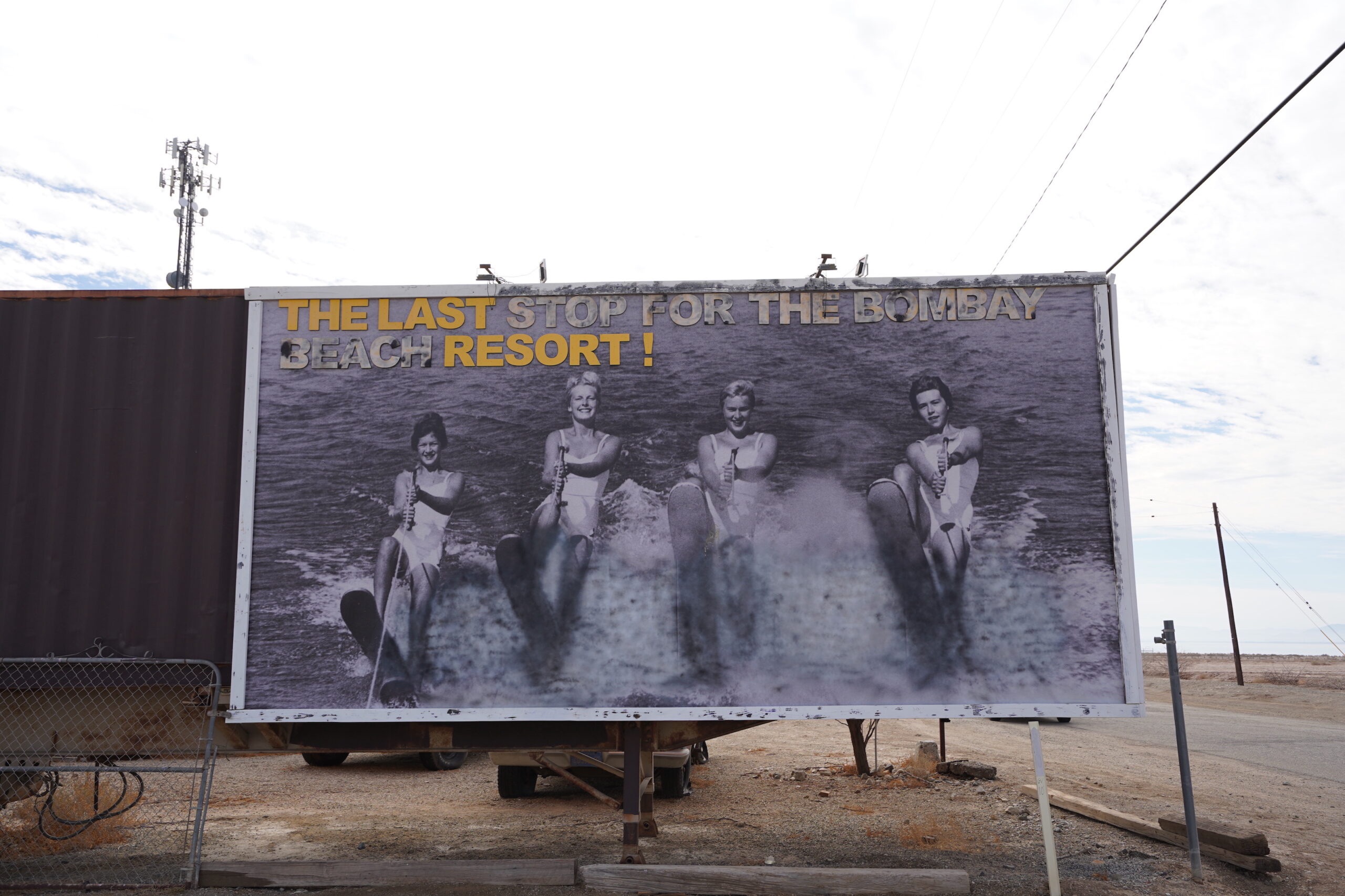 No formal epidemiological study has been conducted on the effects of the drying up of the Salton Sea nor a comprehensive data collection on the totality of the environmental impact, whether the respiratory conditions are a result from Salton Sea toxic dust and particulates, air pollution from Mexico or Los Angeles, pesticides and chemicals-laced water feeding the sea, or a combination thereof.

To complicate matters, data is scattered and inaccurate because residents will often cross the border to get care in Mexico. So quantifying the number of cases with accuracy is impossible.

The pandemic exacerbated some of the conditions that the vulnerable communities already face. When Rodriguez and her parents got COVID-19 in July, her mother who is both diabetic and has had pneumonia twice, had to be rushed to John F. Kennedy Memorial, the nearest hospital about 20 minutes away in Indio.

“When COVID hit, it showed the underlying problems that we already had: the lack of infrastructure, hospitals, ICU beds, the lack of everything that already had existed,” said Miguel Hernandez, Communications Coordinator at The Salton Sea Community Outreach Education & Engagement Program. As of Oct. 27, Imperial County had one of the highest infection rates per capita in California. 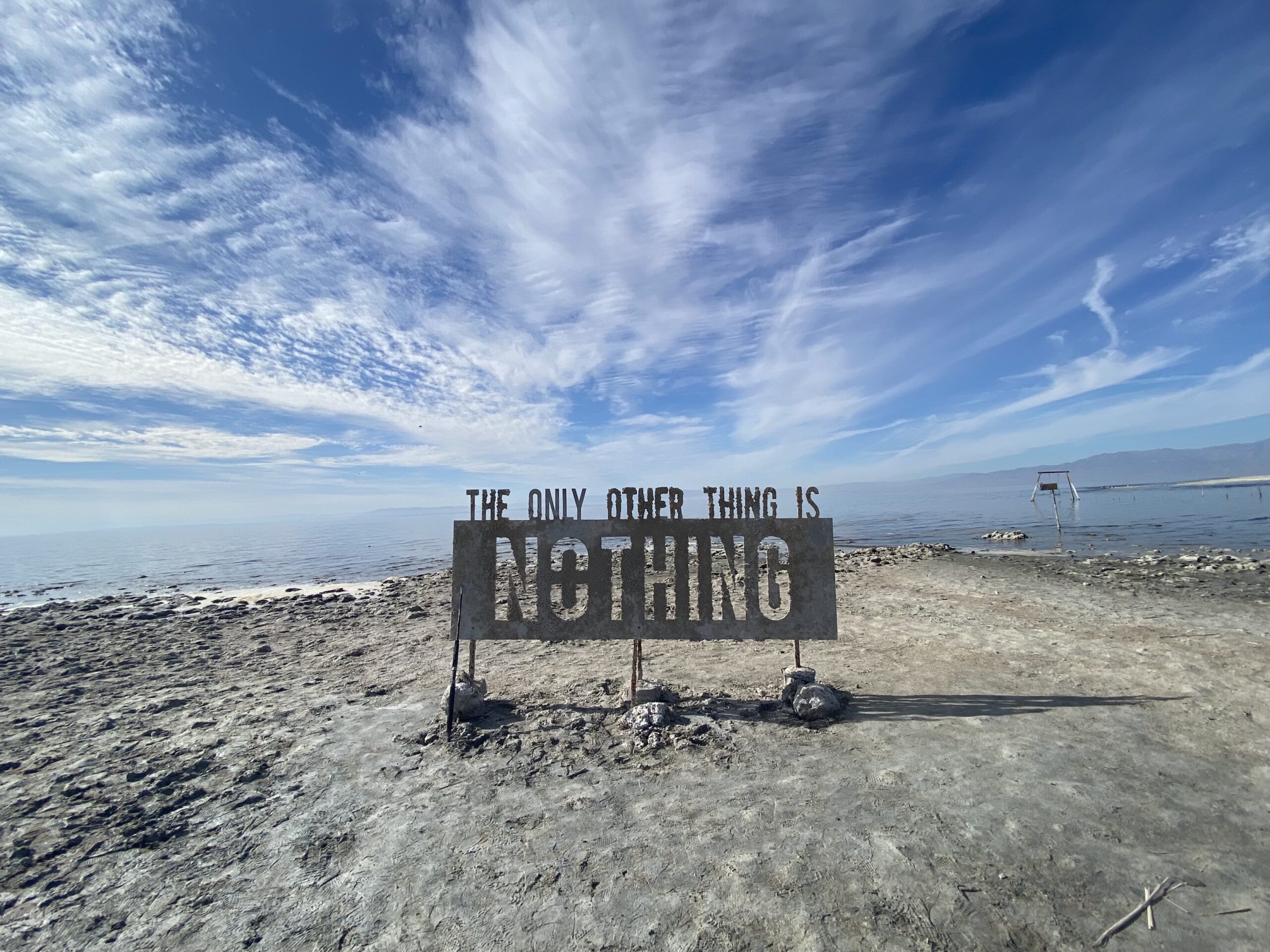 With conditions worsening every year for these underserved communities —on top of an estimated $70 billion in health costs, damages to the ecosystem, and property devaluation—why has there been so little change?

“We don’t have the political capital,” Ruiz explains. “We don’t have the social, economic, or political capital to entice decision-makers to pay attention to us. If the Salton Sea was closer to the greater Los Angeles area or San Francisco, this problem would have been solved a long time ago. But the communities that live around the Salton Sea are poor communities, mainly minorities, mostly Latinos.”

Decades of scientific research, community programs, and environmental group warnings have largely been met with little response from the state of California or the U.S. government. Despite numerous programs and civic and state initiatives, the toxic conditions are worsening as funding is tied up in bureaucratic red tape and administrative slowdown.

Ruiz explains the economic problem: “If it was classified as a lake, maybe it could have the same protection that perhaps some of the more pristine lakes in California has, like Lake Tahoe or some of the better known lakes.” 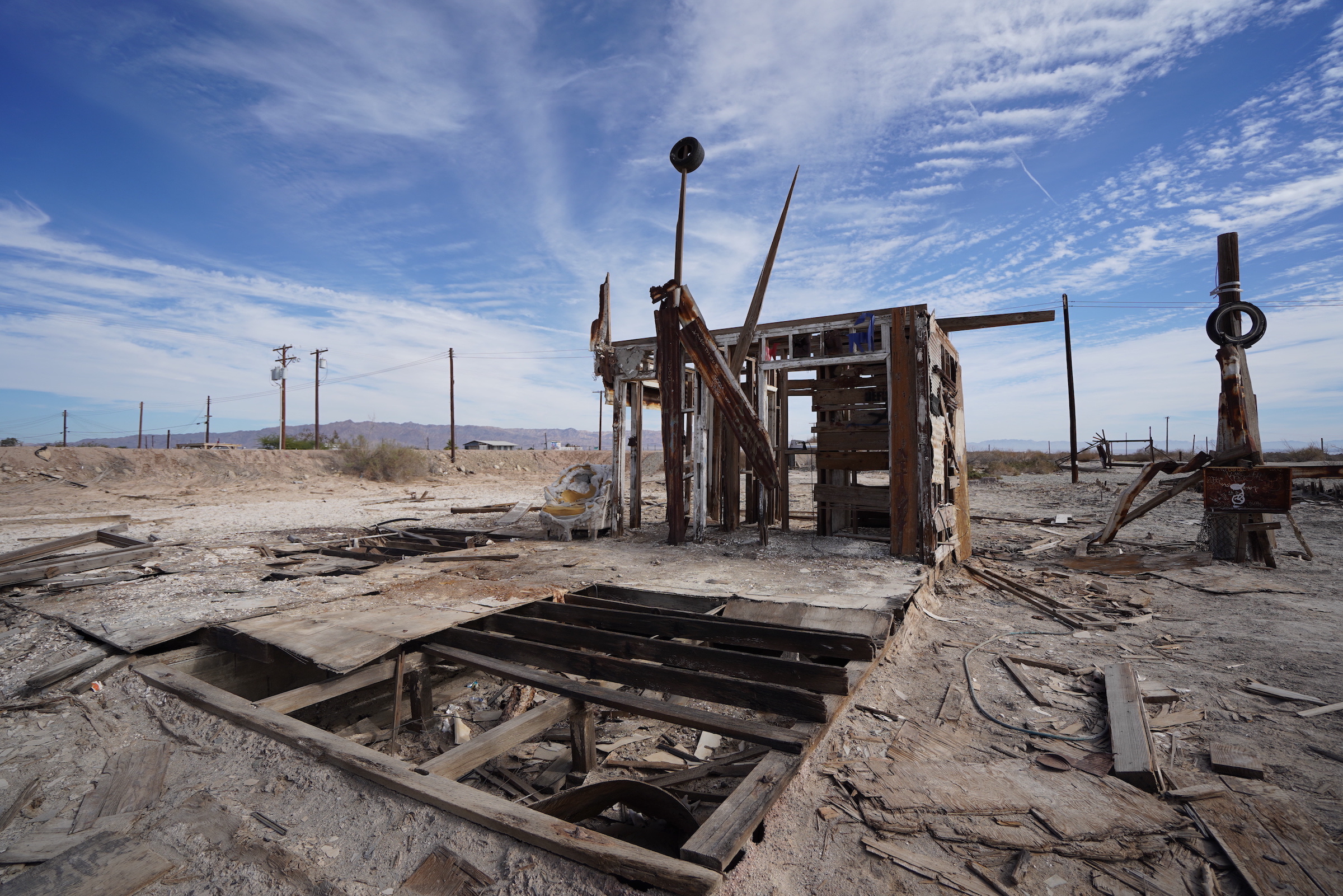 “The gap of wealth and poverty is enormous,” said Luis Olmedo, Executive Director of Comite Civico del Valle. “So few are benefiting from the rich natural resources that exist here and the political system that was created to protect wealth and industry. But the system is changing and it will change. We’re already seeing more engagement and a government that is becoming more responsive.”

When grappling with the dilemmas of the Salton Sea, a common response is to ask, “Well, why don’t people move?”

“Can you ask that question to the Native American communities that have been here for thousands of years? I mean, this is all they have, this is their land, where can they go?” Ruiz asks. “[But] who is going to work? You know, the agricultural industry, this is the labor, right? These are the people that put the food on your tables.”

When Vaquera was going to school, she thought of moving to Los Angeles to seek out better opportunities “so my parents don’t have to work in the fields anymore. But as I grew older, I [realized] no matter where I move, these conditions are still going to be here in the Valley, these environmental issues. They impact everyone, right? Not just even folks living directly around the Salton Sea. We know that like the Salton Sea is California’s largest body of water and it should be an issue that’s important to folks in general.”

“I think the state of the Salton Sea is really telling what’s going on worldwide with environmental justice. And this is our home, this is everyone’s home. We want to protect our home. We want to live here and we want to continue. Hopefully our future generations can also keep calling this home.” 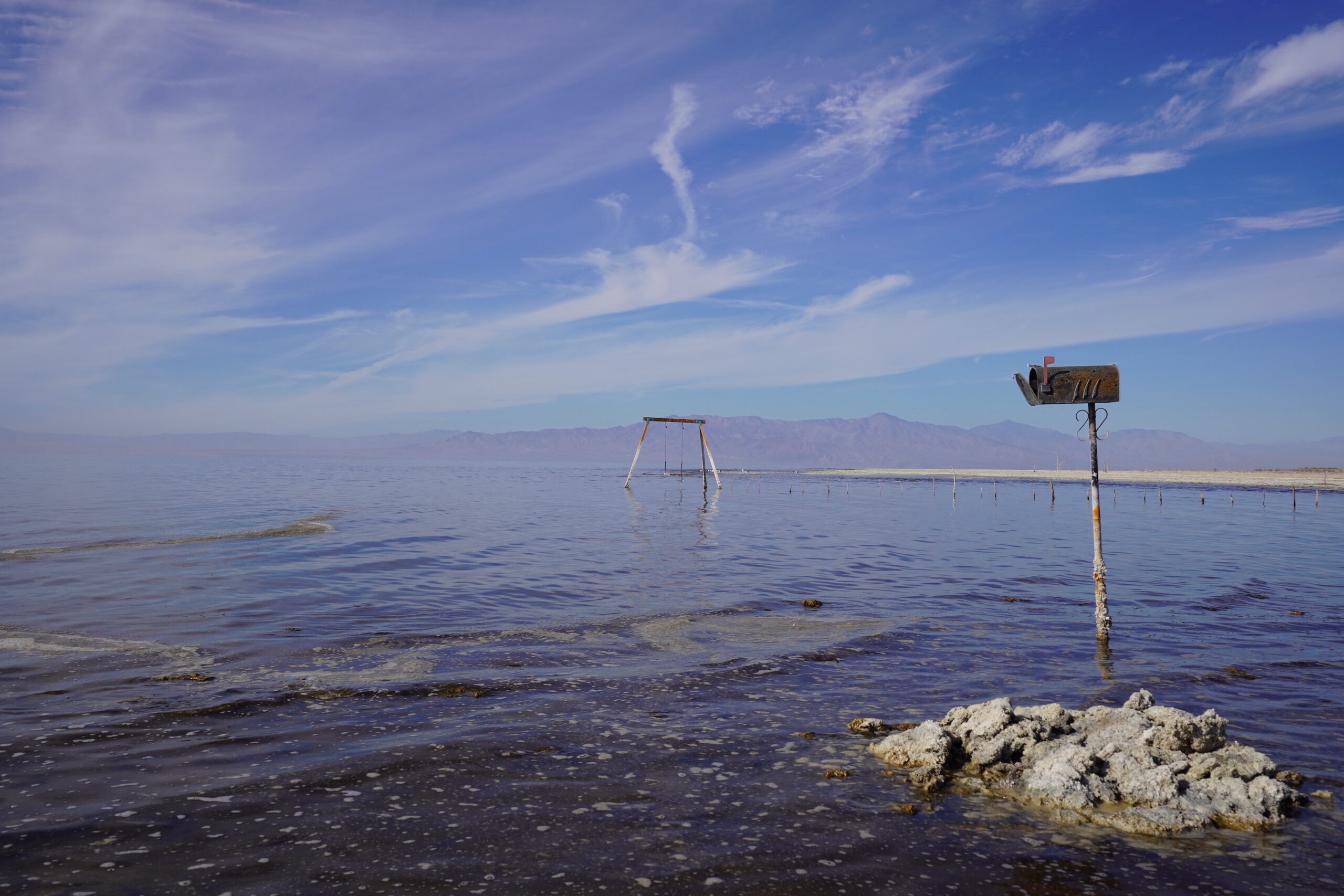