A Subtle Stab at Pro-Choice Advocacy 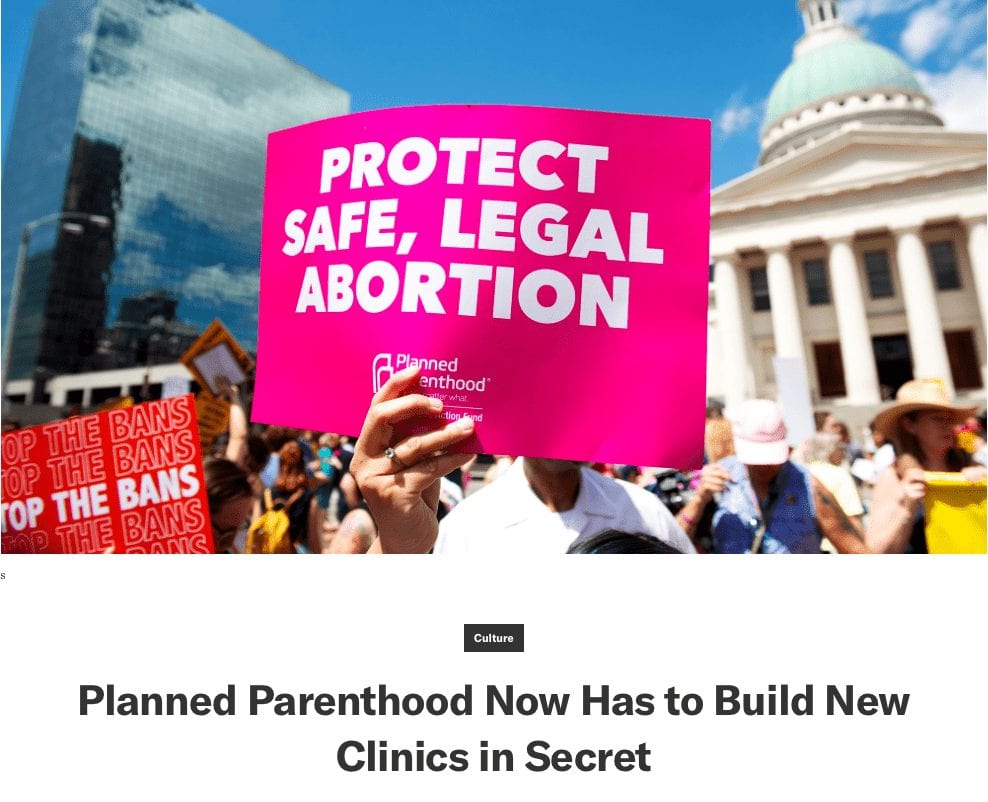 With abortion, most people are either pro-life or pro-choice, and you’d be hard-pressed to find someone who claims indifference.

It is why there is a hint of bias in virtually every single piece of abortion related news in circulation, some of which could even constitute as advocacy. In a recent story by Luke Darby for GQ, “Planned Parenthoood Now Has to Build New Clinics in Secret,” Darby, with the utmost subtlety, embeds his pro-life ethos into what is – at first glance – a straight news piece.

The story itself details the erection of a new, “mega” facility in Illinois, just a few miles outside of Missouri, and the secrecy surrounding Planned Parenthood’s plans for the clinic due to the current political climate. At no point does Darby come out and state, explicitly, that he is pro-choice. But he doesn’t have to.

Darby begins the story by recapping recent legislation that has passed all over the country, none of it favoring of a women’s right to choose. In the fourth paragraph, however, he gives us this: “Women in the U.S. are more likely to suffer health complications from giving birth than they are from getting an abortion, and globally access to abortion goes hand-in-hand with lower rates of maternal mortality. The U.S. by contrast has the highest maternal mortality rate of any wealthy country in the world. And the negative impact of abortion restriction goes reaches well beyond a woman’s time in the hospital. According to a study in the Journal of Pediatrics, when mothers are denied abortions, their existing children then struggle to achieve developmental milestones—language, motor, social, and emotional skills—and the economic health of the household also suffers.”

It’s hardly the fabric of a pro-life protest, but it is enough to tell the reader which way Darby leans. Likewise, while it is presumably all based in fact, they are the sort of facts onto which one whole side of the abortion argument has been built.

Darby concludes his piece with, “The new Planned Parenthood clinic on the Illinois-Missouri border will hopefully ease the strain for some women at least.” If it wasn’t clear before, his careful placement of “hopefully” within the context makes it abundantly so now.

Bias is viewed in many quarters a as a cardinal sin of journalism, but journalists are first and foremost people, and people are inherently biased.Is bias not implicated by just the subject matter journalists choose to cover? According to his GQ bio, Luke Darby covers news, entertainment, and the environment. Would he aspire to write about Planned Parenthood, and subsequently abortion, if he felt amibivalence towards the topic? If he were pro-life, would he have presented the same set of facts?

There’s a bit more nuance at play here, though. If you look at Luke’s Twitter feed, you can see he has his own opinions, and they are strong: For example:  “GOP doesn’t actually give a shit about transparency and ‘norms.’ They get that trashing that shit is how to get their unpopular agendas through.“

You’d be hard-pressed to find a person indifferent to abortion and this extends to journalists too. In the end, it does not detract from the story Darby is telling, nor the way in which he has chosen to do so.