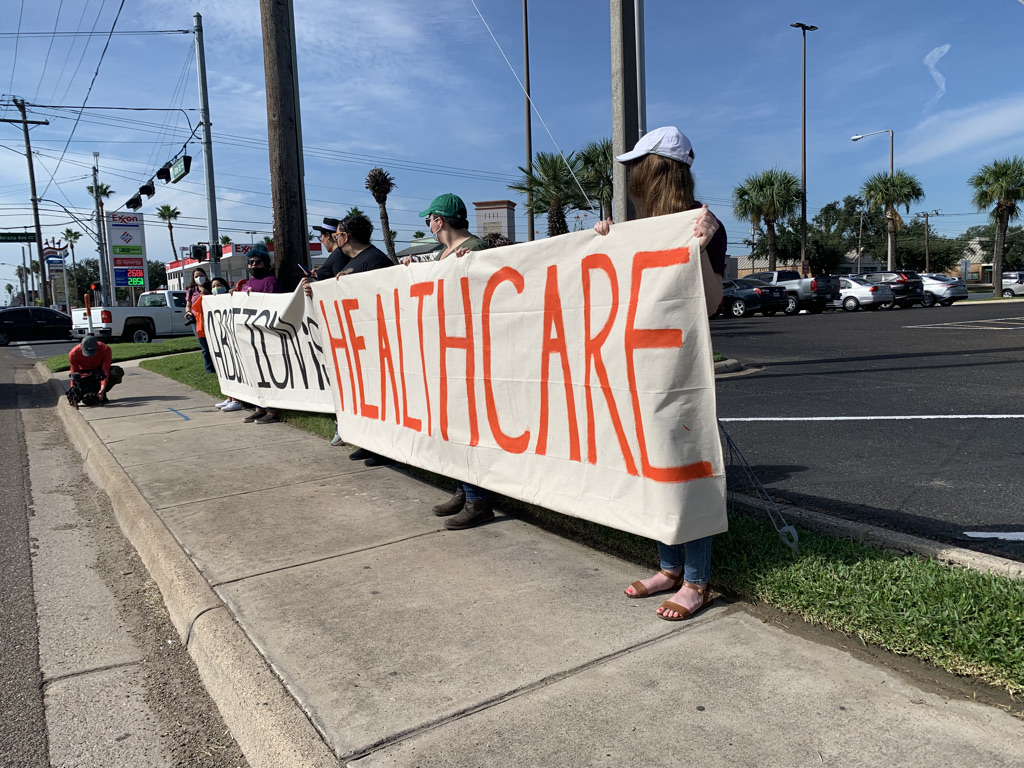 (NEW YORK) — The country’s most restrictive anti-abortion legislation to date went into effect in Texas on Sept. 1.  The law, Senate Bill 8  or SB 8, bans abortions after six weeks of pregnancy, a time period when many people have not realized that they are pregnant yet.

The Click spoke with Zaena Zamora, the executive director of Frontera Fund, an abortion fund based in Texas’ Rio Grande Valley that has provided financial and practical assistance to people in the area seeking abortion care since 2016. She spoke about the situation on the ground in Texas and how the fund is adapting to a post-S.B. 8 world.

Although a federal judge had put a temporary block on enforcing the law at the time of the interview, the fight for abortion access in the state is far from over as an appeals court has already allowed the law to resume.

The Click: What has it been like for Frontera Fund since finding out that SB 8 was going to become a reality?

Zaena Zamora: We saw this bill getting pushed through and us and other organizations were sounding the alarm to let people know, you all need to call your representatives, we need to stop this law, it’s really, really bad. When it finally got sent to the governor’s office, I think a lot of people assumed because it was such a ridiculous law that it would get blocked, because whenever these types of ridiculous laws get pushed through, they always end up meeting resistance and somebody always sues, and they eventually get struck down, but we knew this was different.

We joined the federal lawsuit to stop the bill from going through that went up to the Supreme Court, but the Supreme Court decided not to act, and now we’re living in a post-SB 8 world in Texas.

The Click: How has the situation been since September 1st?

What’s really scary is that Texas is kind of a testing ground. If it stays in Texas and is allowed to stand –  you’re already seeing it happen where other states are starting to introduce very similar legislation, so that’s going to create a whole abortion desert across the South and the Midwest. It’s going to be up to other states to help provide care and that’s just not sustainable. Even just in Texas now, Texans are going to the other bordering states like New Mexico and we’re pushing people who are in those states out and those people are having to go to other states, it’s creating a ripple effect and that’s not sustainable. It shouldn’t be up to those states to provide care for Texans, we should be able to care for ourselves.

The Click: Can you explain the complications of seeking abortion care specifically in the Rio Grande Valley?

Zamora: Abortion in the [Rio Grande] Valley is really expensive, with the starting cost down here being $800. That’s where Frontera Fund helps, but even with the money we’re able to give, some people still can’t afford it. Texas also has a law that prohibits private and public health insurance from covering any sort of abortion care except in extreme circumstances, and I’ve never met anybody who’s been able to qualify.

Another thing that’s also very restrictive is that Texas has a 24 hour waiting period and a mandatory ultrasound, which has to be done by the same provider who’s doing your abortion. The clinic here doesn’t have a local provider, they have to fly providers in from out of state, which makes it complicated. Being in the Valley, we’re in the southernmost part of Texas, it takes us longer to get anywhere and it’s more expensive because we don’t have a major airport, we’re the furthest away from any state line, so the travel costs are enormous. People who are undocumented can only go to the clinic here because they’re unable to travel north of the border patrol checkpoints that are 100 miles inland from the border.

The Click: What does the temporary block on the bill mean going forward?

Zamora: S.B. 8 has language in it that says even in periods where a law is temporarily blocked, if in the end it’s upheld, you can retroactively be sued for providing help during that period where it’s blocked. So just because Judge Robert Pittman issued that order, it doesn’t mean that providers are starting to provide abortions past six weeks. We also know how these laws usually play out, they’ll go up to the Fifth Circuit, typically a very conservative court, and we’re expecting that they’ll uphold SB 8. So it’s a small win, but we’re being very cautiously optimistic because even while all this is happening, people still need their abortions, we’re still in the same situation.

The Click: How can people get involved who want to help out?

Zamora: One thing I like to say is to help your community first. Look at your own abortion fund in your own local community and pay attention to what’s happening in your state and local governments and pay attention to these laws because they’re starting to be introduced because what’s happening in Texas is going to spread. Of course, if you can, donate your time, donate your money, uplift the things that Texas abortion funds are doing, even if you’re just sharing an Instagram story or a donation link. Definitely help the reproductive justice organizations in your own community, because we’re experts at the barriers that exist in our own communities.