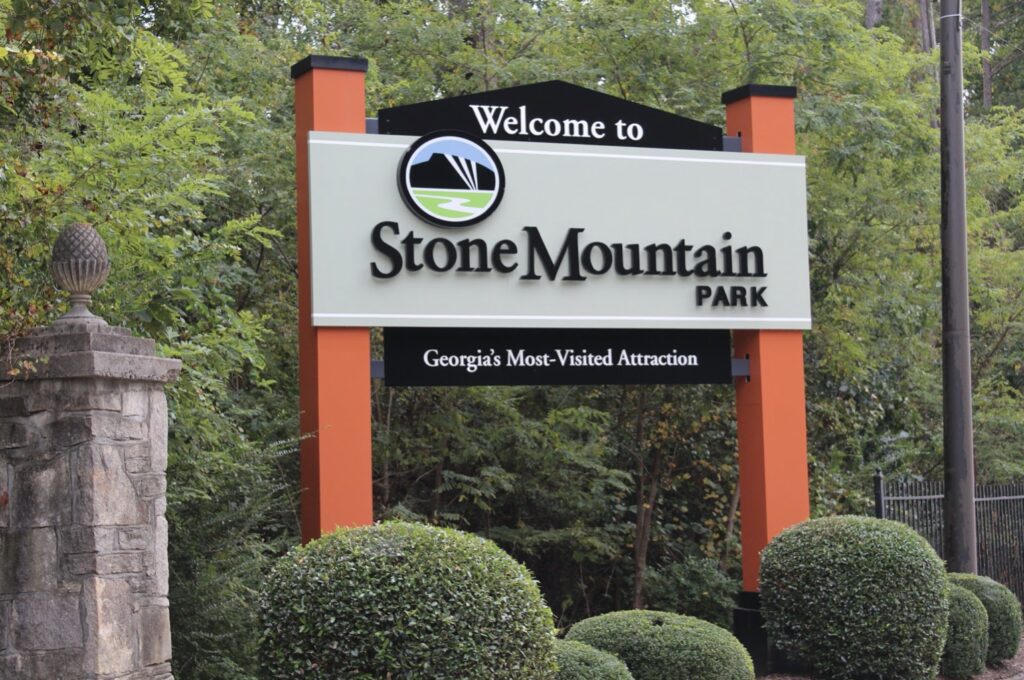 (ATLANTA) — Looking 400 feet up from the ground at the face of Stone Mountain, I see the carved portrait of three Confederate leaders: Robert E. Lee, Thomas J. Jackson, and Jefferson Davis. Behind me, I hear the laughter of children playing with their family, dogs barking as they run through the grass, and chatter among people as they walk around this mountain. As the wind blows, I stand there motionless, trying to comprehend my emotions about this place.

On the one hand, Stone Mountain Park is the largest tourist attraction in Georgia, with almost five million visitors a year. On these 3,200 acres are multiple walking and hiking trails, public events like the famous Fourth of July laser show, and the Christmas Lights Festival. There are hotels, restaurants, campgrounds, and more. On the other hand, this ground is home to the largest Confederate monument and the rebirth of the Modern Ku Klux Klan.

Upon arrival, travelers enter through the ticket kiosk to see colossal oak trees surrounded by patches of grass. The sky appears bluer with no clouds in sight. The park’s beauty as it encompasses the mountain draws visitors in without mentioning the park’s contribution to a complicated racial history. When I close my eyes, I feel free. Then, I remember that large monument looming over me.

As a child growing up in metro Atlanta, I spent a lot of time at Stone Mountain. I remember fishing on Venable Lake, the largest lake on the grounds, attending field trips at the Antebellum Plantation, and cooking out with my family on weekends as we enjoyed the lovely scenery of the park. I was as clueless as the children running behind me. Knowing what I know now clouds my emotions. Ten-year-old me would never want to leave. But as a Black woman standing under this Confederate monument now, I may never return until it is gone.

The rallying cry of this Confederate monument is not just something of the past. On Aug. 15, the Park announced its temporary closure for that weekend because park officials were tipped off about far-right organizations, including some identifying as white supremacists, rallying in front of the monument. This rally was met with opposing leftist organizations and anti-racism protests, which remained non-violent. It was no coincidence that this served as the meeting place. Stone Mountain has been a nexus of all the atrocities of a racially divided South. The past is still present.