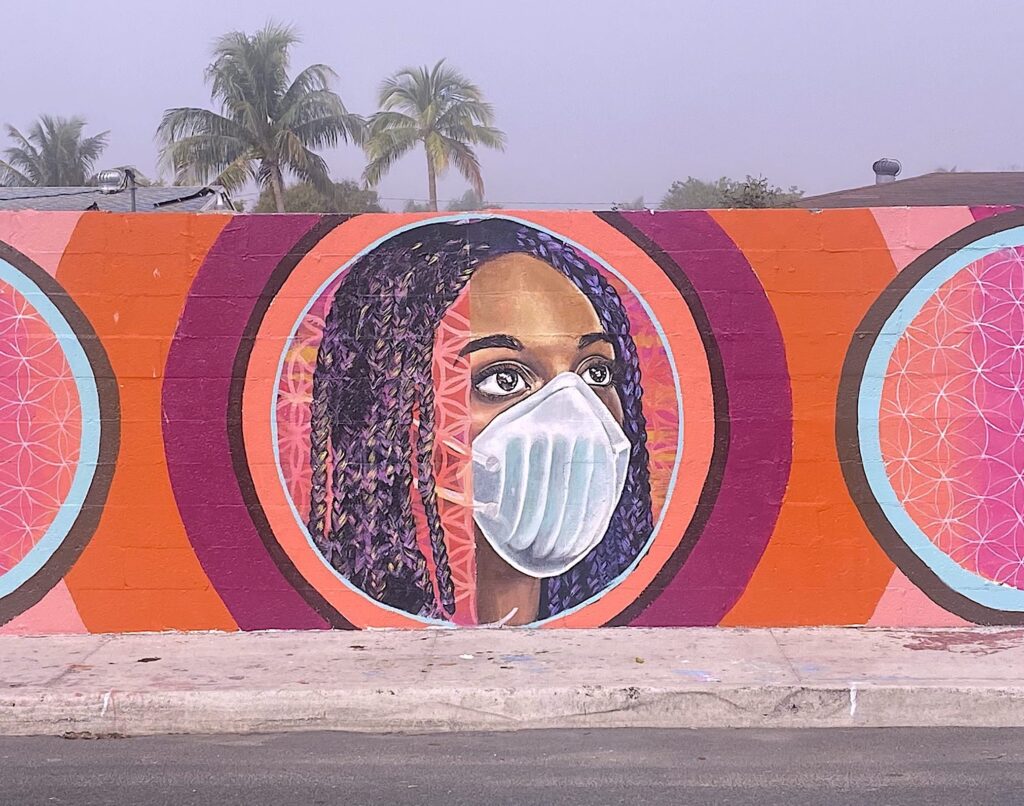 A Wall That Once Divided Races in Florida Aims to Unite

( LAKE WORTH BEACH, Fla. ) — Nobody knows who, for sure, but somebody built a cinder block wall in Lake Worth, Florida in 1954, separating the Whispering Palms white neighborhood from what was once officially called  the “Osborne Colored Addition.”

Eyewitnesses said that the city, now named Lake Worth Beach, built the wall. “Some years back, they were trying to say that the city didn’t have anything to do with it,” said Adella Bell, whose family has lived in the neighborhood for generations. “Well, there’s no documentation, but [my father] was not the only one that said they came down in city vehicles, in city uniforms.”

Over the past year, instead of tearing this 1,100-foot long, 6-foot high wall down, a community committee restored it, reinforced it, and repainted it with uplifting murals. 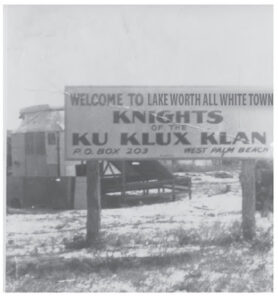 Ku Klux Klan sign declaring Lake Worth to be an all white town. [Credit: Historical Society of Lake Worth Beach]

Trudy Lowe, who serves on the restoration committee, acknowledges that some residents wanted it demolished. One vocal resident, in particular, told Lowe that, “she wanted that wall completely down … that wall has nothing but bad memories.”

Tony Cato, pastor of the New Hope Missionary Baptist Church, which is located one block south of the wall, agrees. “Because of what the wall represents, I would have by all means necessary, found a way to remove the wall.”

Despite the will of many to have the wall demolished, private ownership prevented it. “The wall is actually owned by the eight homeowners who live along the wall,” explained City Councilwoman Carla Blockson, co-chair of the restoration committee. “I love having the wall behind the house, because it allows protection,” explained Julius Jones, Sr., a Black homeowner who owns part of the wall, “but one thing, I would like for the wall to represent our people.”

Life in “The Quarters”

Lake Worth Beach lies immediately south of West Palm Beach. It has a bridge across the Intracoastal Waterway to its own public beach directly south of Palm Beach, an exclusive enclave that is home to the Kennedys, the Kochs, and the Trumps. Walls surround every estate, but those walls—unlike the segregation wall—were built to keep people out, not to keep people in.

The area was originally settled in the 1880s by a woman named Fannie James, a postmaster and former slave, according to Ted Brownstein’s “Pioneers of Jewell,” a history of the area that encompasses Lake Worth Beach. In 1913, it was incorporated as a whites-only district and its Black residents, including its original founder, were forced to move outside the city. The Ku Klux Klan posted a sign declaring Lake Worth an “all-white town.” (Disclosure, Brownstein is the author’s father.)

A 1926 Lake Worth Herald zoning code notice alerted residents that they would be levied a $500 fine for every day they lived in the wrong residential district. Other cities had similar walls during segregation including Miami’s Liberty City, Coconut Grove, and Pinewood neighborhoods, Melbourne, Florida, Detroit, Crane, Texas, Arlington, Virginia, and Ferguson, Missouri. 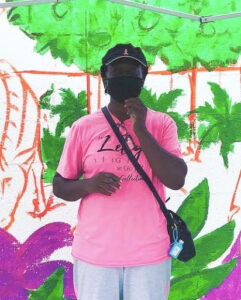 Not all, however, had curfews that only Black Americans had to obey. Lake Worth joins Ferguson in having that distinction, according to architectural historian Chat Travieso.

“That wall really meant that if you go on the other side … your life is in danger,” Cato said, “No matter what it is that you did, it’s basically over for you … because of the color of your skin.”

“We called it ‘The Quarters.’ They said, you couldn’t go out of The Quarters,” she explained.

The railroad tracks that her mother rushed across still run along Dixie Highway, a block away. Heavy freight trains thunder through, shaking the ground.

Memories of violence connected to the wall continue to linger. “One lady I know says that every time she drives by [the wall] she gets a headache,” Bell said, “because she remembers some [violent] incidents that happened to her and her friends when they were, like, teenagers.”

“Coming home from school,” Trudy Lowe remembers, “one white person would tell their dogs to get us.”

The wall stands on the western side of Wingfield Street. A well-landscaped median runs down the center. Industrial shops lie opposite. There is JA Custom Fabricators which fashions ornate gates and stairways mostly for wealthy clientele, Gomez Auto Repair, South Florida Aluminum, which manufactures “decorative shutters and ornamental metal products” also for wealthy residents, and a construction company. Further down is a soup kitchen named Above the Sea.

Over the decades, the neighborhoods integrated, according to Porsche Lowe, Trudy Lowe’s daughter. “This community now is a melting pot,” she said. “Everyone in here was dark-skinned. It’s not happening anymore. We have Black Americans; we have Hispanic; and, as a matter of fact, we have white. We have everyone.” The area is still segregated by income, however.

The restoration and murals are “all about making the community look like the rest of the city,” said Blockson. 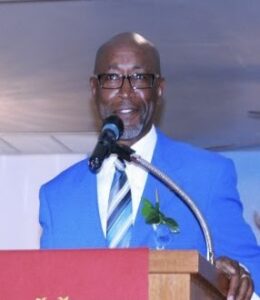 The quality of the murals is helping to accomplish that, painted in bright blues, reds, greens, and every color of the palette. The mostly professional-quality, 10-foot wide murals depict local landscapes, nature, racial diversity, and Black historical figures. Slogans declare “Unity,” “Unity Makes Strength,”  “Love is the Answer,” “Hope,” “Recovery,” and “I am my ancestors’ wildest dreams.” Onlookers are encouraged to “Exhale the Past,” and reassured that the wall is “Mending Our Hearts” and “Working for a healthier Lake Worth Beach.”

Stephanie Stinchcomb painted a beach scene and hopes that people will “get a sense of the beauty of the area and what brings us all together.” “I love that they’re not tearing down the history,” she said, “They’re changing the narrative and making something beautiful out of something that was ugly.”

Hilary Mangel’s mural has giant wings with community symbols inside.

The mural that Lindsay McGlynn painted represents the city surviving COVID-19 with a young Black woman wearing a mask.

Trudy Lowe’s mother served on the community committee that originally renovated and painted murals on the wall in 1994. The city put up a sign renaming it the “Unity Wall.”

“I heard the horror stories or the not-good stories, but the name ‘Unity Wall’ … that’s what I can remember,” Porsche Lowe said. “So, I’d like the wall to stay because of the title. ‘Unity.’”

Cato has a different view, “I just don’t think words or anything like that can change the past or to cover the wounds.”

Bell wants to preserve the wall for “posterity to know what was happening.”

Before 1994, it was “just a cement wall. … I just remember a lot of squares,” said Bell, referring to the cinder blocks that comprise the wall.

Porsche remembers the 1994 renovation. “Dr. Martin Luther King was on there and a firetruck that I guess represented the first Black fire chief.” It was painted by students, and young people, she said who documented history, slavery, and oppression. The current renovation is an “upgrade,” she said, “with the pictures and the quality of the art” and “the quality of the paint.” Her mother, Trudy, also made sure that the renovation didn’t have murals documenting “so much of that old slavery history.” 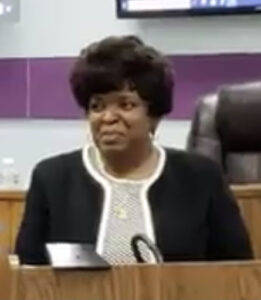 Carmelle Marcelin-Chapman, co-chair of the restoration committee with Blockson, explained that some didn’t want Black Lives Matter, “because of what the wall is representing now, as all of us united,” but “[All Lives Matter] is being used as retaliation to Black Lives Matter.”

Brent Bludworth—an art teacher at Lake Worth High School who painted the mural with portraits of Frederick Douglas, Martin Luther King, Barack Obama, and John Lewis—came up with a solution. He covered the “All Lives Matter” message with black paint and replaced it with the word “Unity.”

“It was divisive,” Bludworth said.“‘All Lives Matter’ includes everybody, but there’s still an argument that that’s not the issue right now in America. It’s that Black lives are being killed and profiled. … I wanted the message to be about unity.”

Despite calls for its demolition, the wall stands, for now, as a communal work of art with messages all can agree on. 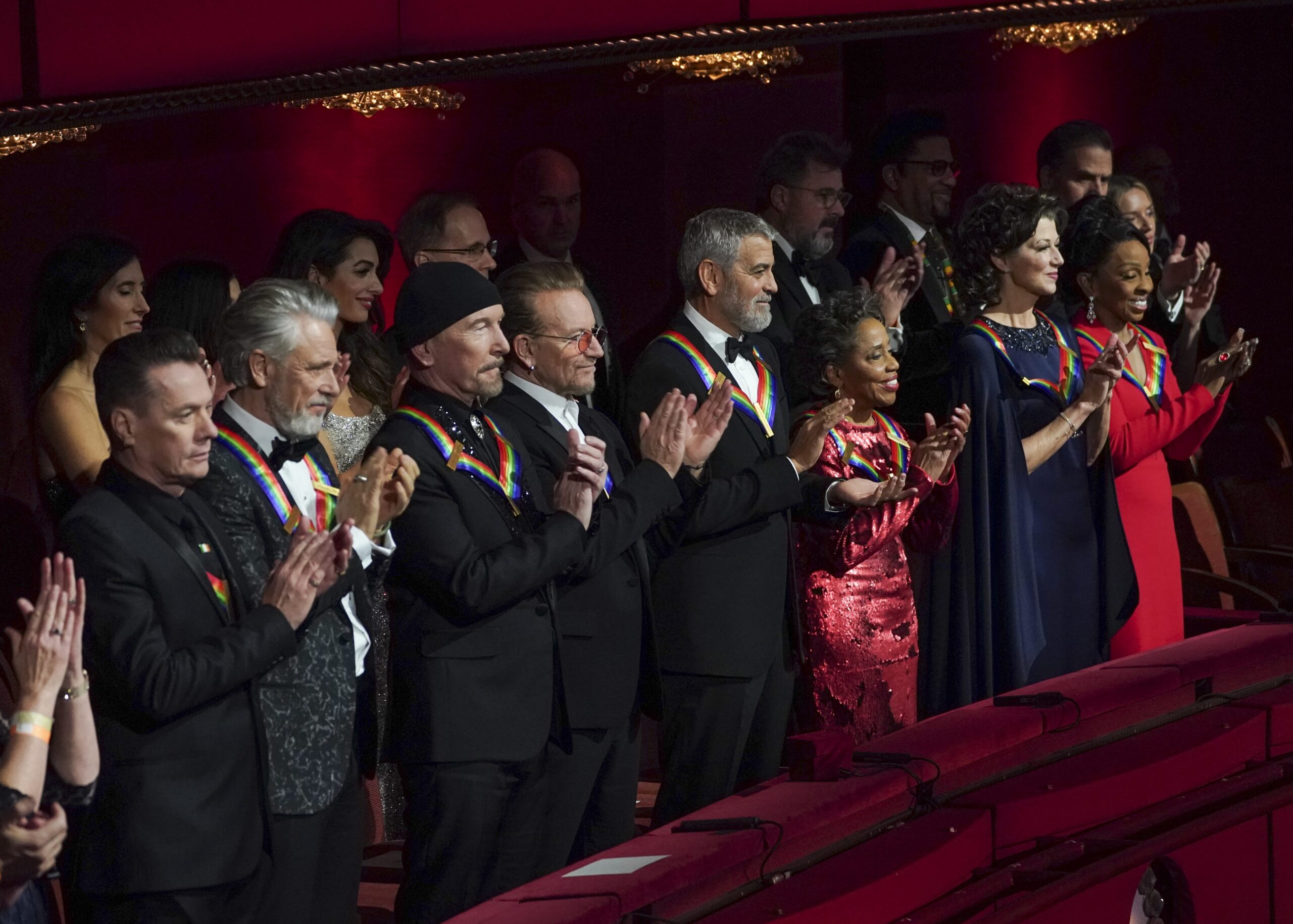 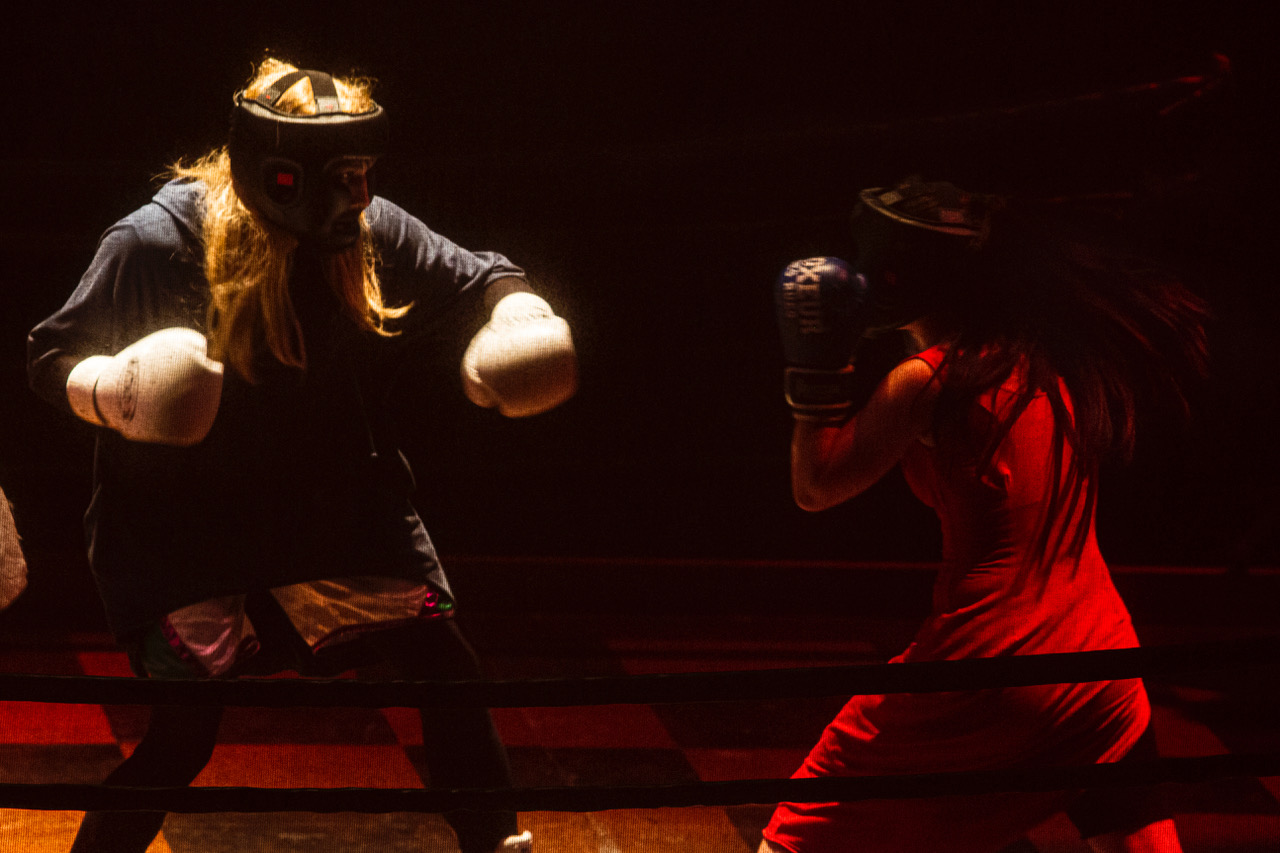