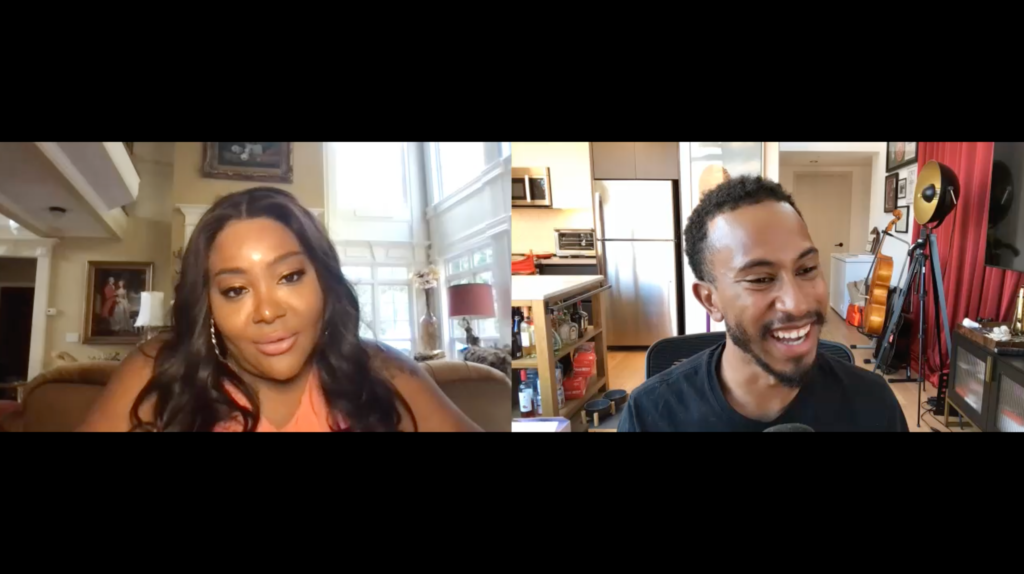 Actress TS Madison on Going Mainstream and How She Defines Joy

(LOS ANGELES) — TS Madison found her claim to fame in 2013 with her viral Vine, “New Weave 22 Inches.” As an activist, entrepreneur, and author, Madison has jumped into the mainstream through sheer tenacity and talent.

She is most known for her YouTube show, “The Queens Supreme Court,” and even has her own reality series, “The TS Madison Experience,” on WEtv. Recently, she’s taken her confidence and talent to the silver screen in movies such as “Zola,” the Gabrielle Union-led project “The Perfect Find,” and Billy Eichner’s “Bros.”

Madison sat down with The Click to tell us how she took agency of her own career, where her confidence stems from, and how she is nowhere near stopping any time soon.

When it comes to your career, especially starting in the adult entertainment space, that transition to mainstream media, was there a point where you were fearful of it?

To be honest with you, I’ve always known that I would be occupying some form of a television space. I don’t know what it was. I just knew that that was going to be. I did get in a place when I was in the adult entertainment field where I was like, OK, nothing is moving, so I’m just going to make the best of what I have. And then when the doors started opening up for me to cross over into mainstream and I wasn’t fearful, I just saw a shift in the climate where they tried to place you as a spokesperson or whatever. That’s not what I came here to do. And that’s just the way it is when you go into these spaces, it’s just like, “Oh, girl, she ain’t ready for Hollywood.” It’s not that. It’s just the fact of the matter that you’re not going to police me, and you’re not going to make me be something that I’m not.

I am an individual who don’t take no-nonsense. There are some things I let fly. Some things I might eat you up about. You might get it, no matter what space I occupy because I survived over there before I got mainstream. So I still survive over here. But then, when the day is done, I wasn’t really afraid. I just was more like, this is a lot of weight because now it’s like they expect you to walk this line, and I’m not walking no line, bitch. I don’t drink and drive. So I don’t need to get out of the car and walk no line. I ain’t drunk.

As a trans woman of color, do you feel that a lot of responsibility is put on your shoulders to be a voice for the community?

I do feel a lot of that. There are times when I want to voice my opinion on a lot of things. It’s difficult because when you really look at the whole situation, I come from a time, my own time. In this new age of pronouns and the ever-so-changing letters in the LGBTQ spectrum, there’s lots of things that even I might get in trouble for because I’m still learning this stuff. This stuff is new for me. I’m used to things going a certain way, so I might not say everything correctly. I might say something that’s real to me.

The new climate has tried to eradicate that. And it’s just like, Nah, because that’s a part of my story. One thing you’re not going to do is erase my story. And so that’s just the way it works. We’re either going to find some way that I’m going to be able to speak to it from my experience, because if you’re asking me a question, I’m speaking to you from experience. Either we’re going to merge me with other people, so there can be a collective set of voices, or you just gon’ take it how I give it to you from the way it comes from me. But I still go in there with the knowledge of, “All right, Madison, you do have an entire community that’s paying you attention.” So you got to think about it first before you answer it, and then you have to think about where you were and where you are now, but still be true.

It’s always been the case that society tries to tell people who they should be. I think what’s impressive about your story is that you decided what the check marks were when it came to identity. You decided what that looks like for you. But everybody seems to be living in the space of trying to tell you, “Well, to be TS Madison, you need to match these,” and you’re like, “No, this is me.” How did you get that strength?

Do you know why? Because I have a personal relationship with the Creator, honey. And my God talks to me at all times. And what my God says to me doesn’t sound like none of what folks over there say to me. Because he got the last say when it all boils down to it. And if my existence, success, and the trajectory of my career depended on them over there telling me what box to check, I’d be beneath them. Not then. Not now. That’s because regardless of where those girls talk about the TS and how the TS did adult films, they didn’t do half of the things I did. So you can’t speak to me. You can only speak about me, boo. The people that are calling my phone, they ain’t on your line, OK. So I’m not concerned about all that.

Now, speaking of checking all these boxes in your career, you have recently been cast in Billy Eichner’s romantic comedy, “Bros.” As you moved along the timeline, was there a moment where you decided, “I want to be an actress today”?

That movie that’s coming out before that, I’m here with Gabrielle Union and then all the things that I’m so quiet about that I can’t really wait to share until it’s time. But, baby, please believe that the trajectory is going this way for the rest of my career, amen.

But when I walked in the door, I didn’t know if I wanted to be any other thing. I just knew that I was going to be a star. That’s just it. That’s all. However, the star fell in the sky. And I did tell myself that I don’t want to just be one thing. I want to encompass all things because you get out there in the world, and then people try to tag you. Right now, a person wouldn’t really know what to tag on me because they can’t say she’s a YouTube star, or a Vine star or TikTok star, or she’s a social media maven. RuPaul calls me “the social media maven.” Yes, I am a social media maven.

You have to broaden your thoughts because sometimes God will give you exactly what you really ask for. He says you have not because you asked not. And if you ask him just for a nail salon, you might just get a nail salon. But if you say, God, I want a chain of nail salons. And God said you know what? I’m going to give you a whole strip mall where you can put a nail salon, a barbershop, and a clothing studio. You have to dream as big as you can think of. You have to. And let me tell you where I learned this stuff: by hoeing, and that’s it. You asked him for $20, that’s all you’re going to get. You tell him, “Sir, I want $500.” He may be like, “You know what, girl? Oh, that’s so good.” He’ll maximize the dream. Ask for what you are worth.

What does joy look like when you look at your life?

Yeah, joy for me is catching all the surprises that God has for me. That’s what joy is for me. I dream big. I write big on my vision board. I do all this stuff. But the joy comes when God says, “You know how you bought this house 14 years ago? Girl, get ready.” And I’m like, “Get ready.” That is happiness for me. “Do you know how you had that TV show this year? Get ready. Because I remember, chile, I’m going to take you there.” I remember just being in a space asking,” God, just give me enough to pay my rent,” and I’m no longer in that space. Now I’m asking, “God, am I going to keep this house and the other one?” I have the option, the ability to make all of these decisions without any weight or care or worry. I used to have worry. Oh, my God, my light bill too. Oh, Jesus. I ain’t got 10 more days. I got to come up with it within 10 more days. Oh, God, I’m sick right now. But I could lay over there on my sofa right now, and I ain’t worried about nothing. Nothing. And there was a time that I worried about everything. Joy for me is having the peace of mind that I’m walking in my purpose. Because if I wasn’t walking in my purpose, the doors wouldn’t fling open like they’re supposed to. And a lot of times, I still get told no. I still get doors closed in my face. But I’ve learned I just didn’t need to be there. I thought I did. I thought it was for me. But this was the better choice for me down the line. So, I’m just taking things as they come, knowing that I’ve asked God for bigger.

I’m going to be able to bless others around me. How I’m going to be able to bless my Black people with jobs and my trans people. And that’s what brings me joy. Other people were striving around me that didn’t give me any help. And I told myself, when I get to those places, I’m not going to be that because there’s a young Queen out there that’s praying to God for help. He’s going to tell me, “Get her a job because you got the ability to get her a job.” People say, don’t forget where you come from. Oh, yes, I don’t. And that’s why I’m not going to forget where I came from, because there’s a gay boy out there that just wants a little help; there’s a trans person out there, a black woman over there that needs some help. There’s a family that just needs somebody to give them a little opportunity.