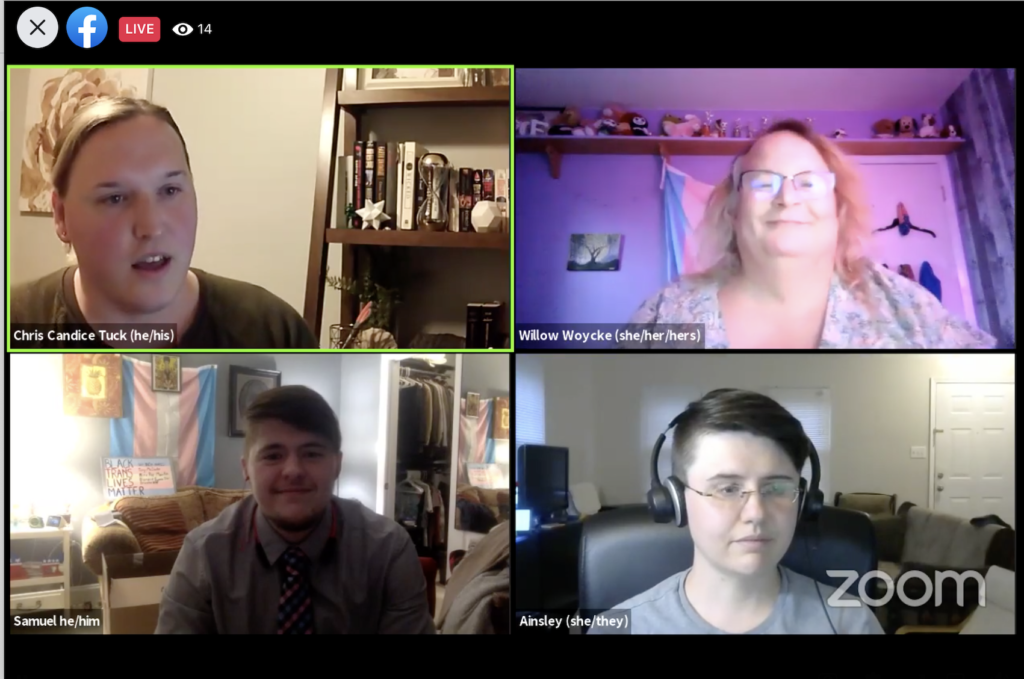 Over 400 people tuned in to a Facebook Live panel event held in recognition of Transgender Day of Visibility on March 31. The panel, which was open to the public, was hosted by Equality Loudoun, a volunteer-run organization in Loudoun County, Virginia whose mission is to “promote, protect and defend LGBTQ+ equality in Loudoun County.” The virtual event was accessible on Equality Loudoun’s Facebook page, where a recording of the event is still available.

The panel was led by Chris Candice Tuck and featured local advocates Willow Woycke, Ainsley Hendershot, and Samual Hamblin as panelists. “It was our hope that having a more personal intimate setting would provide for better stories and we really hoped that using folks that weren’t celebrities or influencers could help ground those stories for many,” Tuck said following the event.

At the start of the panel, Tuck set the tone by saying, “Today is also a day of celebration in addition to a day of remembrance.” It was acknowledged that while there is still a significant amount of violence against those who identify as transgender, visibility of the transgender experience and acceptance of people who are transgender have grown in recent years.

The panelists shared anecdotes from their own experiences of coming out and embracing who they are. Woycke, a member of the Board of Directors with the Transgender Education Association of Greater Washington, said, “After I transitioned, I felt a huge relief in my body. I lost a lot of weight and my relationship with my wife became much more intimate emotionally, and we connected on such a deep level. Now we have conversations about our relationship and life and they are so deep, whereas before I transitioned we would have short conversations and maybe followed by a fight.”

When speaking about their experiences as adolescents, Samuel Hamblin recalled school administrators refusing to accommodate students who were transgender. “It felt very ‘othering.’ It made it very clear that the administration didn’t care about my identity, and it gave students permission to bully me because it communicated that ‘if the teachers are okay with it then it gives me an excuse to be okay with it,’” Hamblin said.

The conversation then moved to how adults can create safe spaces for children who are transgender to be themselves. Hendershot said, “Trans children just want to feel safe in expressing who they are.”

Tuck discussed the potential difficulties that intersectional issues such as sexism and homophobia may have on children being able to be themselves by saying that, “It’s more difficult for someone who is assigned male at birth to present femininely than it is for someone who is assigned as a girl at birth to present as being male, because a girl who presents with masculine traits is just called a tomboy.”

During the conclusion of the panel, which ended up running longer than the set 60 minutes for the event, panelists gave advice to those who may be trying to find the identity that best fits them. “You do not have to know immediately who you are. It can take years to figure out sometimes,” said Hendershot.

Transgender Day of Visibility is an internationally recognized event celebrated annually on March 31. Founded in 2009 by Rachel Crandall Crocker, the executive director of Transgender Michigan, it is a day to recognize transgender and non-binary people.

More information about Equality Loudoun can be found here.