(Costa Rica) — For native Costa Ricans, the phrase “Pura Vida” is loosely translated to “living life to the fullest” in English. However, for Costa Ricans with African ancestry, they have been subjected to a far darker experience because of their hidden history, advocates say.

For more than a century, the Afro-Costa Rican population has been subjected to racist policies and misunderstandings that have molded conflicts amongst other natives.

For one, most native Costa Ricans — also known as “Ticos” — didn’t know there was slavery in the Central American country from 1502 to 1824. Costa Rica had its unique form of slavery because there wasn’t a viable crop plantation system, according to The Tico Times. Many slaves were forced to serve as domestic servants alongside Spanish colonists in Cartago; until a short boost in cacao production, which corresponded with the largest migration of slaves between 1690 and 1740.

After Costa Rica abolished slavery in 1824, Afro-Costa Ricans faced a long battle for recognition such as receiving equal rights as other non-Black native Costa Ricans, who are better known as “Ticos,” according to African American Registry.

The Black Madonna, commonly known as “La Negrita,” is Costa Rica’s most cherished holy relic and housed in one of Central America’s most famous churches, The Basilica of Los Angeles (Basílica de Nuestra Señora de Los Ángeles). On August 2 of every year, many Costa Ricans travel to the church to honor the country’s patron saint in a celebration called “The Feast of Our Lady of the Angels” (La Fiesta de Nuestra Señora de Los Ángeles). 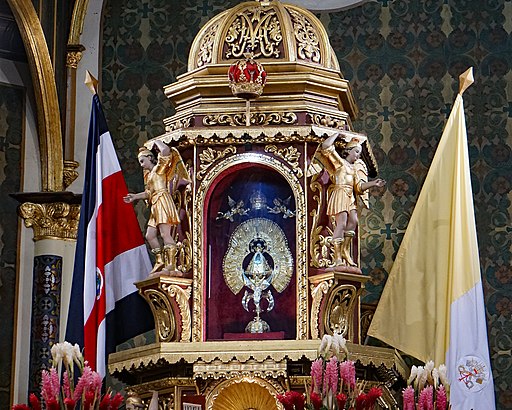 According to Costa Rican folklore, the Black Madonna statue was discovered by a Costa Rican girl in 1635. While looking for firewood, she saw a black rock shaped like a doll that was sitting on top of a stone. An image of a woman and child was engraved on it. Upon finding the statue, she took it home, and when she awoke the next morning, it vanished. When the girl returned to the stone, there was the statue. This happened three times. The girl even told a local priest, and when he tried to take the statue home, the same disappearance and return of the object to the stone happened to him. It was decided by the Catholic church that the Black Madonna would have her own sanctuary and to this day, the statue is preserved in the Basilica.

Most people know this version of the story. However, Natasha Gordon-Chipembere, author of “Finding La Negrita,” went through five years of research on the Black Madonna and revealed its origins during slavery.

“It was a free Black woman who found the small black stone icon carving of the Madonna and Child in the forest outside of colonial Cartago in 1635,” Gordon-Chipembere said to The Click during an interview in October.

After receiving a grant to research slavery at the Costa Rican National Archives, Gordon-Chipembere learned that Costa Rica had at least 200 years of slavery, including enslaved and free communities in Nicoya, Matina, and Cartago. Due to the lack of information and erasure of the Afro-community, Gordon-Chipembere rewrote Costa Rica’s Black Madonna narrative.

“I felt there was a gap. People didn’t know there had been actual Black people in Costa Rica, enslaved and free for over 200 years. That’s what this book is about, putting that information on the map. I wanted this book to be deeply historically accurate,” said Gordon-Chipembere.

“Finding La Negrita” is a historical fiction novel that delivers vivid imagery of slavery in Costa Rica, that includes the reality that most Spaniards could not afford to keep slaves while struggling to sustain their own livelihoods. This eventually led to many enslaved Africans getting released, provided the opportunity to buy their freedom, or lived independently on cacao plantations, according to The Tico Times.

When Costa Rica gained its independence from Spain in 1821, the native white Costa Ricans took the Black Madonna out of the free Black community and turned her into a national symbol of the country, Gordon-Chipembere said.

“This movement was part of the ‘whitening’ process of the Black Madonna and the erasure of Afro-descendant spiritual practices in nation making,” according to an interview Gordon-Chipembere did with Black Agenda Report in November.

A Fight for Equality

“If you can walk away with the human aspect of Afro-descendants, even with the backdrop of enslavement, you can take away that these characters were full human potential; and people who had hopes and dreams, just like anyone else,” said Gordon-Chipembere. 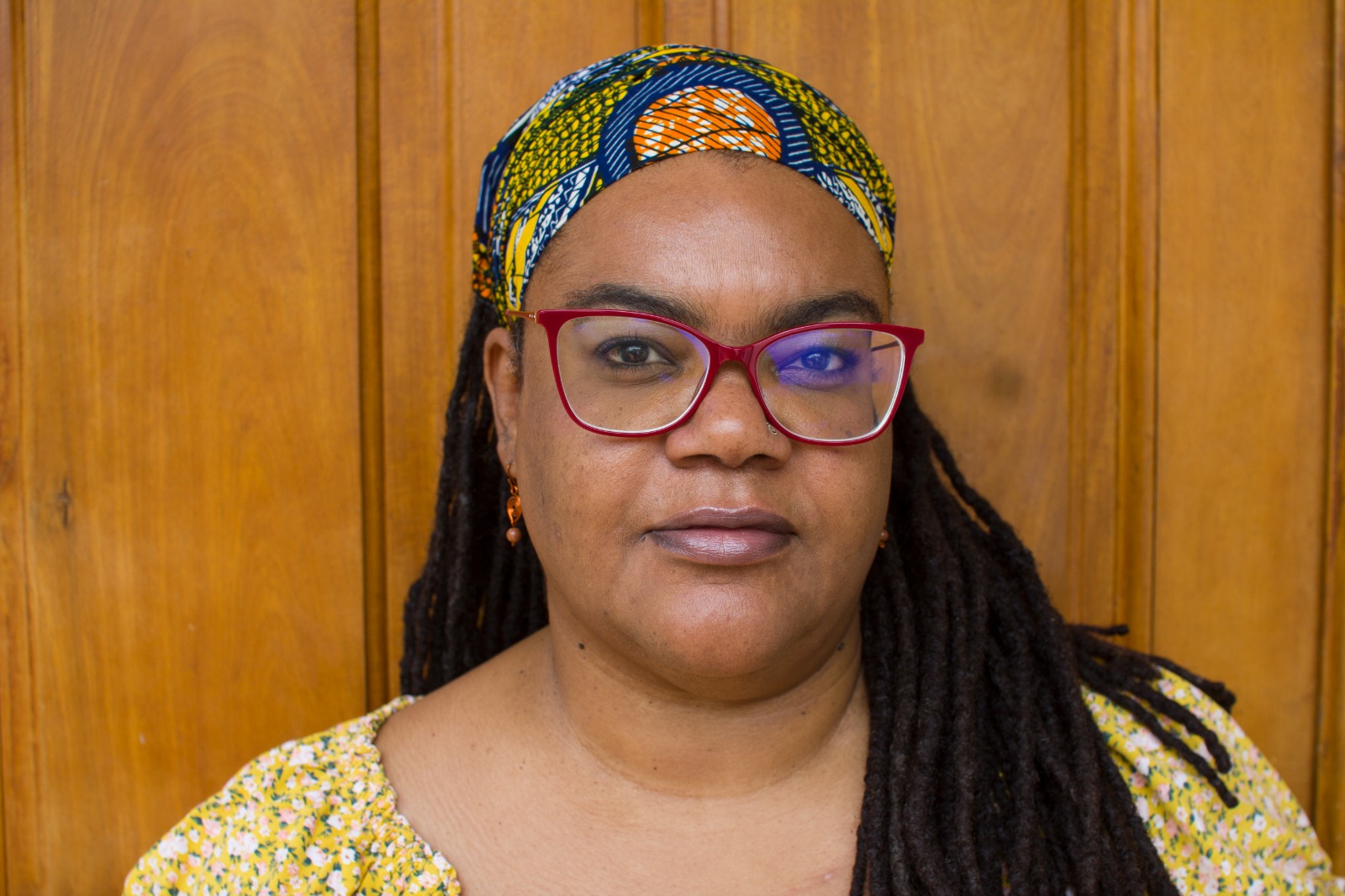 Pamela Cunningham-Chacón, like Gordon-Chipembere noticed that there’s very little documentation of the Black experience in Costa Rica. Cunningham-Chacón took her 20 years of advocacy in Afro rights and feminism and to create Costa Rica Afro, an Afro-feminist and anti-racist advocacy organization that focuses on Afro-Costa Rican causes.

Cunningham-Chacón said that about 10 years ago, there was a yearning for this information from other Costa Ricans and that’s what ignited her campaign for equality.

Mostly led by her sister and a small group of friends, some of Costa Rica Afro’s goals are to bring awareness and advocate for the economic, political, social, and cultural contributions of the Afro-descendant population. According to their Facebook profile, they also offer support, with an afro-feminist perspective, to other advocacy groups who share similar interests.

“There has been a lot of work to talk about how we [the people of Costa Rica] are one community,” said Cunningham-Chacón. “That has led to the invisibility of the Afro communities, Indigenous communities, women, LGBT+, and so on and so forth.”

Costa Rica Afro’s fight for equality was recognition first, while access to basic-level necessities followed after. Afro-Costa Ricans are one of the communities with less access to formal jobs and healthcare, said Cunningham-Chacón.

According to Minority Rights Group International, employment possibilities for Afro-Costa Ricans are limited; due to economic and racial discrimination. Those who have secondary education may be able to get work at refineries or harbor ports, although job opportunities are offered by those with unconscious bias towards Afro-Costa Ricans and companies with a history of systemic racism, Cunningham-Chacón said. However, some chose economic migration to the United States or work on tourist boats to send money back to their families.

“Although we are equal by law, we are not equal in our ability to have the Costa Rican experience the state and government have to offer. So, talking and confronting those things and urging the government and the state to create public policy has been part of the fight,” Cunningham-Chacón said.

During the last session in Costa Rica Congress, her organization was slated to participate in a project that would implement affirmative action in education, health, and labor practices for Afro-Costa Ricans, said Cunningham-Chacón. The project has not been signed into law since the election of a new president, Rodrigo Chaves Robles, in February.

The Dark Side of Pura Vida

Costa Rica prides itself on being the Switzerland of Central America with no military, environmental priorities, and a population that is homogenous, Catholic, and peaceful.

“The coast of Central America’s safest country offers Black expats, such as African Americans, a life less stressful, more affordable, and free from the burdens of everyday racism,” according to The Guardian.

Amid the COVID-19 pandemic, Candice Williams, a African American woman, left her job at the Children’s Hospital of Philadelphia, Pennsylvania, and moved to Costa Rica with her children and partner. She said it became clear she needed to better herself, mentally, and for her two children.

“Moving to Costa Rica forced me to relax. I hadn’t realized how tense I had been. With Costa Rica, I was able to create a whole new life somewhere else,” said Williams.

Many Black American expats, seeking a better lifestyle like Williams, share the belief that America is not a safe place for them.

Nearly 80% of Black Americans who participated in an August study by Pew Reserach Center said that they have personally experienced discrimination because of their race or ethnicity , and 68% also said discrimination is the main reason many Black people cannot get ahead. Racism, police brutality, and economic inequality are some of the major concerns for African Americans living in the United States, the study revealed.

“I’ve never endured so much brazen racism in my life,” said Maylynn Devish, a Black American woman, who lived in Fort Collins, Colorado, where she was often called various racial slurs by white residents.

Devish worked remotely for a small company during the pandemic. Once her boss told her that she could work internationally, she moved to Costa Rica with her son and husband in February 2021. 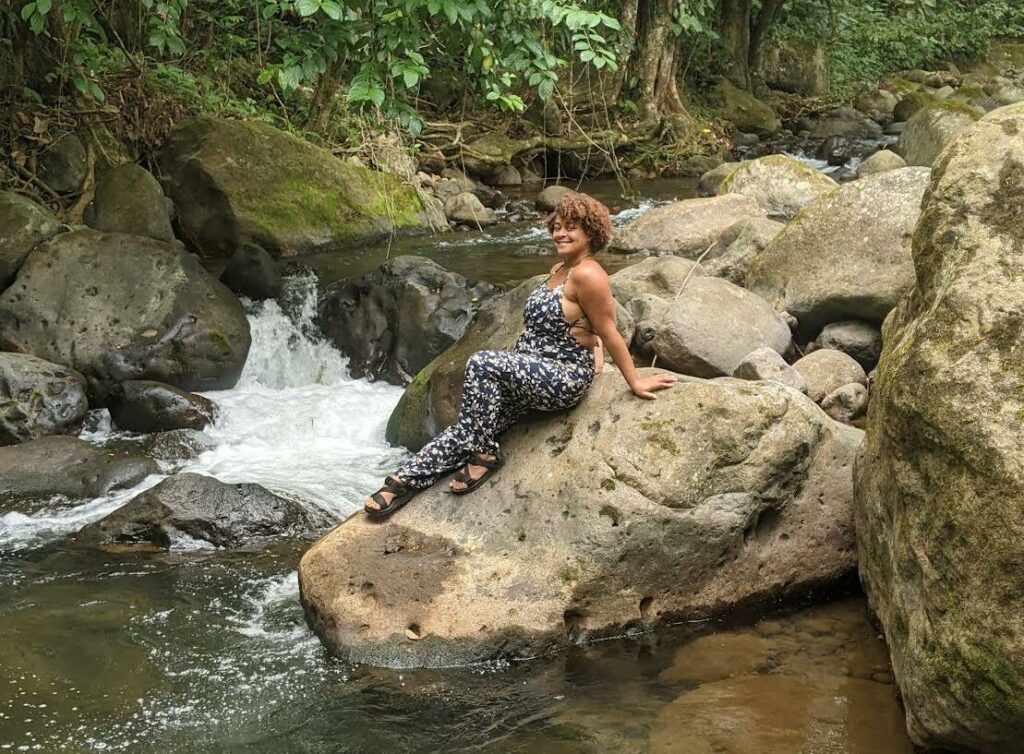 “I love the beauty here and how I go to places and not get followed,” said Devish. “I’m not treated like a criminal.”

“In Costa Rica, they will have the privilege of speaking in English, being labeled expats and not immigrants. They come with U.S. currency and live in the nicer areas of Costa Rica,” said Cunningham-Chacón.

Devish recognizes her privilege of being a Black American living in Costa Rica. “I can afford it. My income is what a doctor or an engineer makes here,” said Devish who shared that she earns an annual salary of $46,000.

A physician’s annual salary in San José, Costa Rica’s capital, is $55,102, while a civil engineer’s compensation is $45,863, according to Teleport.

Devish says that anytime she sees vendors selling peanuts or other baked goods, she will offer to pay them more than the original price.

“If they are charging me to pay a ‘gringo tax,’ I’m 110% willing to pay it because that’s my personal contribution for coming here and taking up resources from somebody else,” said Devish.

The Guardian reported how generational wealth in the U.S. acquires property inheritance, job success, or stock ownership. Black women in America earn 63% of a white man’s salary, have the highest unemployment rate among women, and are less likely to be promoted, according to The Guardian. For many, generational wealth is an unattainable ideal. However, in a place like Puerto Viejo, owning a home or property is a more attainable dream, as the typical waterfront house costs around $100,000. The national average for a waterfront house in the U.S. is $370,900, according to Quazoo.

According to CostaRica.org, the concept of “Pura Vida” and the assumption that living in Costa Rica will bring less stress and happiness seems to unify the people of Costa Rica.

The United Nations Sustainable Development Group released an article in December 2021 about 21-year-old Jan André, an Afro-Costa Rican, who says he is deeply affected by racism in Costa Rica.

“Some people cross the street when they see him coming their way. They hide their belongings when he approaches them on the bus. Guards and staff single him out for surveillance when he enters a supermarket. Police search him and seize his belongings even when he is in a crowd in a public space,” according to the article.

Simpson believes Costa Rica is the finest country in the world. She did say, though, that if someone came to Limon and saw what Afro-Costa Ricans went through, they would feel differently.

“We are recognized worldwide for being ‘Pura Vida,’ ‘everything is fine,’ and ‘we have everything under control,’ but when it is time to put it [anti-racism] into practice, that’s where the fight comes,” said Simpson.