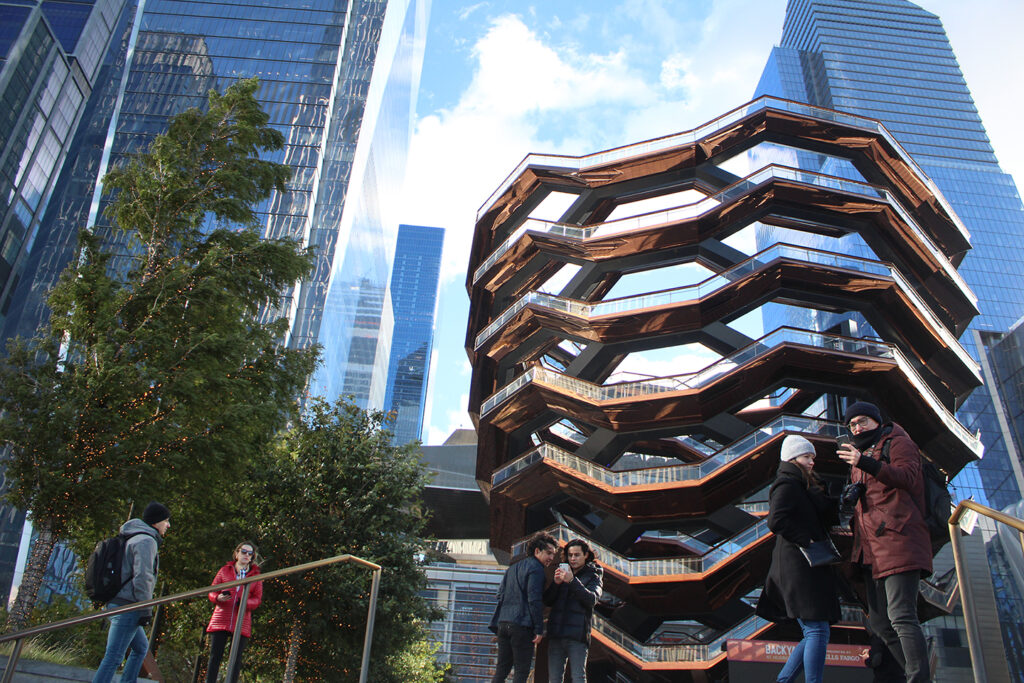 Tourists at New York City’s Hudson Yards review selfies taken in front of The Vessel, the sculpture at the center of the new neighborhood development. [Credit: Lauren Sierra]

After Tragedy, How Does Hudson Yards Move Forward?

(NEW YORK) — In May 2021, the 154 flights of stairs at the center of New York City’s newest neighborhood development, Hudson Yards, were reopened for ascension. The Vessel, an open-air, 150-foot-high structure consisting of  2,500 steps and 80 landings, had sat empty for several months while its developers debated how to move forward after three people jumped from the top in less than a year.

As the city emerged into a jubilant, post-peak-pandemic summer, it seemed that the Vessel, with new suicide-prevention policies in place, and Hudson Yards as a whole, hit hard by the social implications of the pandemic, were on the mend.

A little more than two months later, a 14-year-old boy jumped to his death from the top of the Vessel.

Today, the $200 million Vessel remains closed indefinitely, and the developers are left grappling with what to do next — whether that’s keeping it closed, making physical changes, or as some have called for — demolishing it. It leads one to question what exactly the role of the Vessel is at Hudson Yards — and perhaps, what exactly is the role of Hudson Yards in New York City?

Video: The Vessel is the centerpiece of the Hudson Yards development. [By Lauren Sierra]

The riverside site where the skyscrapers housing corporate offices and luxury condominiums now rise was once the last major undeveloped parcel of land in Manhattan. Plans had been floated in the early 2000s to erect a stadium in hopes of an Olympic bid or the return of the New York Jets to city turf, but these didn’t materialize. Eventually, a deal was made in 2009 between the city and private real estate developer Related Companies, chaired by billionaire Stephen M. Ross, to rezone the area and build it into the complex it is today. According to the New York Times, it is the largest public-private venture in New York and the city’s biggest development since Rockefeller Center was built in the 1930s. 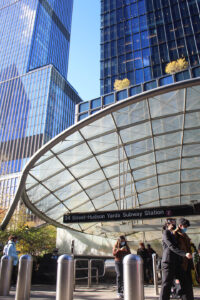 Passengers exit the subway station paid for by the city as part of the development. [Credit: Lauren Sierra]

The $25 billion development centers around offices for major companies like Warner Media and L’Oréal USA, along with a high-end food and dining complex, high-rise condominiums, the world’s only Equinox hotel and a performing and visual arts center called The Shed. The city paid to expand the 7 Train from its previous last stop in Times Square to reach the area, along with funding the public green space.

At the center of the area’s public outdoor space is the Vessel, which was to be the crown jewel of the development. Ross, the developer, said that it would “become to New York what the Eiffel Tower is to Paris.” However, from its reveal onward, it was met with vitriol from both architecture critics and ordinary New Yorkers. One writer compared it to a “colossal shawarma” that is “predominantly a feat of ego, power and wealth.” Another critic called it a “50-foot-high, $200 million, latticed, waste-basket-shaped stairway to nowhere.”

“Architects believe in utility — the form follows function, and this just has almost no utility,” said Fred A. Bernstein, a contributing editor at Architectural Record. “It’s really just a conversation piece.”

From the beginning, there were concerns over the waist-high rails that surround the Vessel’s platforms. Architecture critic Audrey Wachs warned of the possible dangers in an article published in The Architect’s Newspaper before the structure even opened — “When you build high, folks will jump,” she wrote. Many people and organizations, including Manhattan Community Board 4, which oversees the area, pleaded to make the rails taller after the first suicide occured in February of 2020.

“Yes, technically it is a work of architecture, and I’m messing with the architect’s vision,” chair of the board Lowell Kern told the New York Times after the most recent suicide. “But we are dealing with life-and-death issues. Art and architecture have to take a back seat.”

When the Vessel reopened after the initial suicides, it did so without any changes made to the physical structure. Instead, Related added an increased security presence and ubiquitous suicide prevention signage. Visitors were required  to enter in parties of two and pay an entrance fee, but as the summer’s tragedy revealed, it wasn’t enough. Related did not respond to a request for comment.

To solve or to shutter?

The cause for the Vessel remaining a climbable tourist attraction doesn’t have many champions left today. Heatherwick Studios, the designers of the Vessel, told CNN after the most recent suicide that it is continuing “to work to identify a solution that is feasible in terms of engineering and installation.” However, Ross himself told The Daily Beast in the days after the boy’s death that “we thought we did everything that would really prevent this,” suggesting the structure may remain permanently closed. 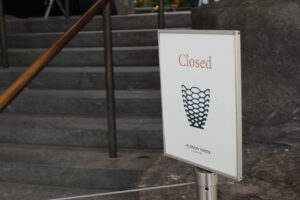 Cathleen McGuigan, the editor in chief of Architectural Record, has called for the Vessel’s demolition, saying that, “Taking down the Vessel would begin to correct this enormous error in which the public interest was pushed aside.”

Others have pointed to Bobst Library at New York University as an example of a possible solution. After three student suicides occurred in the atrium, perforated aluminum screens were installed as a measure of prevention.

“The whole point [of the Vessel] is to look good, it doesn’t really have any other purpose,” said Bernstein, the architectural writer. “If you’re like the library at NYU, it has another function, there’s a reason to keep it.”

Jacob Alspector, an architecture lecturer, told CNN that beyond the physical barrier issue, the Vessel may just be fundamentally flawed. He said, “It’s not the most friendly and life-affirming and inclusive kind of space or structure. It’s kind of empty. What’s the point of it? Just to walk up and walk down?”

This feeling was echoed by Jenny Weinbach, who was in town to visit a friend and stopped by Hudson Yards on the way to visit the nearby High Line.

“Even if you could still go up — the point is just to walk on some stairs?” she asked. “The whole area gives us ‘Capitol from the Hunger Games’ vibes,” referring to the utopian city at the center of the dystopian novel.

In the midst of the pandemic, the other crowning aspects of Hudson Yards have struggled too. According to the New York Times, only 30 residential units sold at Hudson Yards in 2020, while 157 sold in 2019. The centerpiece of the retail space was the flagship Neiman Marcus, which closed amid bankruptcy in the summer of 2020. Other stores and restaurants followed suit. In a city inundated with world-class shopping options, the retail space isn’t a necessary pull for tourists and locals — except, as Weinbach said, to “maybe use the bathroom.”

According to the New York Times, the second phase of Hudson Yards, which was to include 265 affordable housing units and a public school, is on indefinite hold due to an array of financial issues.

“The number one public benefit that could have come from this project is being held up,” said Samuel Stein, a housing policy analyst and urban studies instructor at Hunter College. “We had the opportunity to build out an entire new neighborhood, and we did it in ways that really deal with none of the city’s core issues.”

Despite all the issues and debate, the Vessel is still causing tourists to flock to the surrounding plaza — implying there may be inherent worth to keeping the structure standing.

“We honestly wanted to go all the way up,” said Braulio Palomares, an international tourist, “but we also just wanted to come here because it’s really impressive art.” 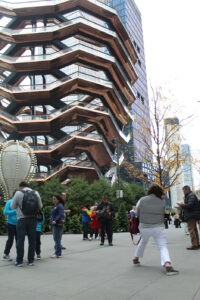 The Vessel continues to attract tourists despite being closed for climbing. [Credit: Lauren Sierra]

“One hundred percent, I don’t regret coming at all,” said Drew Berkland, who was in town from Minnesota with friends and had been checking out the Vessel in awe. “I saw that it was closed and was still like, ‘Let’s go.’”

Michele DeBella, who runs the New York travel blog From Inwood Out, said that she can see the value in having “a monument that can’t be climbed.”

“It’s the centerpiece to me, it anchors the whole place,” she said. “I think it ties everything together around Hudson Yards. Even if it is a bit futuristic and weird, it’s a sign of being a modern, growing city.”

For now, Hudson Yards exists in the pandemic limbo of the current moment. The people gathered for lunch on the park benches are not the office workers or high-end shoppers developers hoped to attract, or the average New Yorker many wanted the development to serve. Instead, they are mostly the construction workers who carry on despite the current lack of crowds, watching as a smattering of tourists takes selfies in front of the empty Vessel.