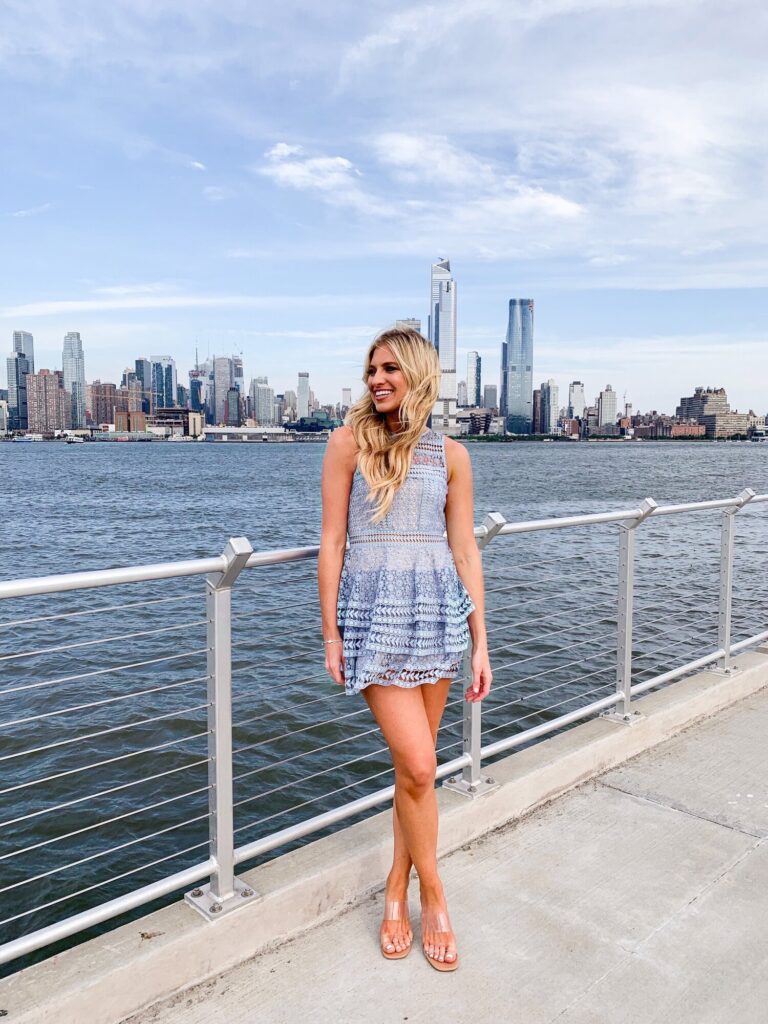 Ashley Bellman has interviewed The Rock and Cher in her career as an entertainment reporter, but she’d love to interview Leonardo DiCaprio. [Photo by Heather An.]

(SOUTH BRUNSWICK, N.J) — When Ashley Bellman graduated from NYU in 2009, there weren’t a lot of opportunities for the broadcast journalism and politics double major. In the midst of the Great Recession, Bellman was determined to achieve her dream of working as a television journalist. Jobs were scarce, but she was not giving up. She applied all over the country for almost any position that would let her practice her passion—from general assignment to breaking news jobs. Today, she lives her dream as an entertainment and lifestyle reporter. Bellman has worked as the face of Toledo for FOX and has hosted and reported for Billboard, The Hollywood Reporter, QVC, and New York Live on WNBC. After a long and rewarding journey, Bellman spoke with The Click at NYU to share her story.

The Click: When did you know you wanted to be an entertainment journalist?

Ashley Bellman: When I was in elementary school and the movie Titanic came out. I would watch Access Hollywood every night and see if I could get a glimpse of Leo [DiCaprio]. That was kind of what sparked this desire or, kind of the knowledge of entertainment reporting. Before that, I always loved acting and the theater. I love the arts in general and love to write, so that kind of sparked it. I also grew up watching The Today Show from the time I was little. That was when it was Katie Couric, Matt Lauer, and Al Roker. I remember seeing them and wanting to be them.

The Click: Do you have any advice for future journalists?

Ashley Bellman: One of the best parts of NYU was living in NYC and interning in NYC. At the time, I interned at MTV and little production houses to get that hands-on experience, and [took] these classes where the professors had you go up to new restaurants and get a story.

The Click: What advice would you give to someone who wants to be an entertainment journalist?

Ashley Bellman: You see people on TV, especially in entertainment reporting, and you see this glossy side of things, but that’s three percent of the job. The other 90 percent is a lot of research, a lot of digging, finding people and scheduling, and making it happen, and persistence. My biggest piece of advice is you have to love what you do. I have heard so many no’s and that’s [given me] thick skin. You have to be able to take those no’s. You only need one yes. The no’s can get hard, y’know?

The Click: How do you prepare for an interview?

Ashley Bellman: A lot of research. If it’s for a movie, TV show, celebrity, or a book or an author, the fun part is watching a movie, TV show, or reading a book—all the things I love. Beyond that, just researching what that person is up to. [Think about] what I would want to know as a fan, create an outline with questions, being flexible, and not going in with an approach set in stone. It’s more organic when you are actually having a conversation.

The Click: What was your favorite interview and why?

Ashley Bellman: That’s such a hard question. I would say if we’re talking celebrities, I interviewed The Rock [Dwayne Johnson] for [Fast & Furious Presents:] Hobbs & Shaw. It was such a nice conversation and that’s an important thing to think about if you’re going into this field. You can have your questions but listen to what the other person is saying. And those make the best bites, segments, takes. If it’s interesting to you, it’s going to be interesting to a viewer. Also, I’d say Cher’s stunning. She’s just everything you want her to be and more. I interviewed her for Mamma Mia! [Here We Go Again], at a junket in London.

The Click: Who would your dream interview be with?

Ashley Bellman: I’d always wanted to interview Leonardo DiCaprio because it would be a full-circle moment. Going back to my Titanic crush and my wanting to be in the industry. As well as Katie Couric because I look up to her and I think she’s just an amazing journalist. Oprah would be really cool as well.

The Click: How are you reporting as a journalist during the pandemic?

Ashley Bellman: During the beginning of COVID-19, we were all at home, and, like everyone, I had to pivot to get a home studio, essentially. If I turn my camera around, I have two soft lights, a ring light, a [Blue] Yeti microphone, my computer is on a DJ stand, I have a Canon camera to make my shot better. Just relearning how to shoot and produce my own videos from home. We do a lot of our interviews over Zoom. Segments, b-rolls are shot over cell phones.

The Click: What does a perfect pitch have to have?

Ashley Bellman: I think the perfect pitch has to have good substance. I think if you’re pitching a good story, then it’s going to happen. I have been on both sides of pitching. I’m constantly pitching my book series to different places, I’m pitching to my producers at NY Live different segments. But I also receive pitches from people that want to be on NY Live, so I would say if it’s extremely long, that’s bad. When I get paragraphs of words in an email, I’m constantly on the go, so I think being concise is a great way to go into it.

The Click: How do you balance family life and work?

Ashley Bellman: I don’t have children just yet so it’s not very difficult for me. I have a husband who is very supportive and has been from day one. I met him in Toledo during my first job so he’s always known my job is my passion. I have a little dog named Myla. I do want children and when they come it’s about having a team and it does take a village and I know it’s going to.