American Dream Mall Not A Dream For Everyone 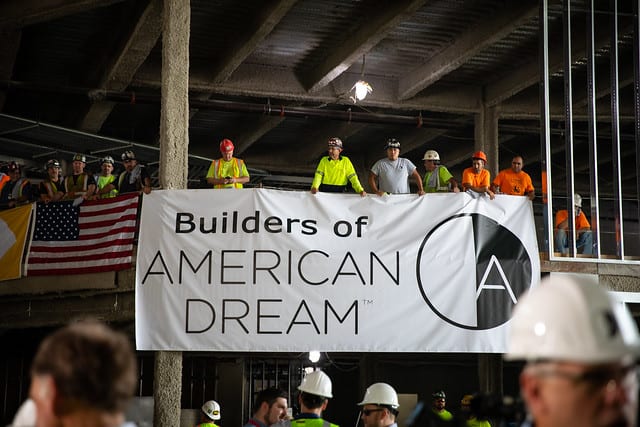 A new mall could give or take from a Jersey community. Image by Edwin J. Torres/NJ Governor’s Office.

JERSEY CITY, N.J. — New Jersey is about to become home to the new American Dream—or American nightmare, depending on what county you call home.

After years, and years of construction, the multi-billion dollar project that has been deemed by the Triple Five Group the “American Dream” mall, is set to open on October 25th in East Rutherford. The group is also responsible for the Mall of America and the West Edmonton Mall, the two biggest shopping centers in North America to date.

The mall’s website boasts an approximately 3-million-square-foot structure that it anticipates will draw 40 million visitors annually. It is to house 450 retail stores, as well as a DreamWorks Water Park, an NHL-sized ice rink, and a Nickelodeon Universe Theme Park, which according to NorthJersey.com, will all take up around 16 acres in total.

“The theme park has three world-record-breaking coasters, and the indoor water park will be home to the world’s largest indoor wave pool, and the tallest indoor body slide,” the website reports.

These are only three of the larger attractions. There will also be at least one concert venue, an indoor ski slope, aquarium, and two miniature golf courses, to name a few others. While this might sound exciting for some New Jerseyans, it is equally terrifying for others. New Jersey native, Anais Canela has presided as the general manager of Zara at Newport Centre, in the heart of Jersey City, for the past 18 months. In that time, she says, she has grown her business to a $13 million (a year) volume. American Dream, however, is only about a half hour drive away from Newport, in New Jersey, and now host to what will be the “biggest Zara in the country.” According to Canela, the new store is expected to bring in $20 million in the first year, at minimum. What does this mean for her store?

“It’s definitely going to affect business, particularly in the first few months, Canela says. “I expect we’ll see it taper off for awhile, but hoping that the accessibility of Jersey City in comparison to East Rutherford will be enough to keep us relevant. Either way, we’re going to take a hit. Not only that, I’m already losing employees to the new store. Six or seven, so far.”

Canela credits her loss of employees to the American Dream promise of a higher rate of pay. As much as $3.25 more for part-time employees than she pays at Newport Centre, she says.

Even more worrisome to Canela, who lives in Rahway, is the impact American Dream will have from a local standpoint: “It’s going to put East Rutherford on the map,” she says. “When that happens, prices, costs, they go up. The cost of living in that area will go up. And the traffic…”

The East Rutherford area is well acquainted with traffic, as it is currently home to MetLife Stadium, and sits just seven miles outside of midtown Manhattan. But what will be an influx of an estimated 100,000+ tourists a day do to the area’s current traffic predicament?

“I can’t even think about it. The crowds, the traffic. I will never go,” Canela says immediately when presented with the idea,

Others took to Twitter to echo Canela’s concerns and frustration: 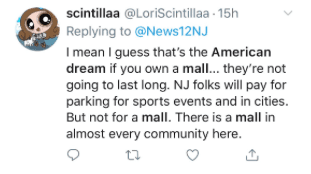 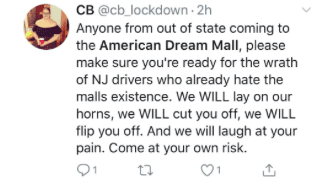 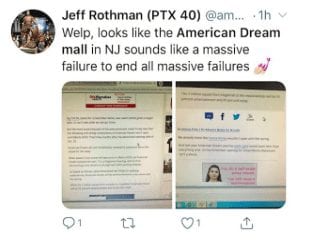