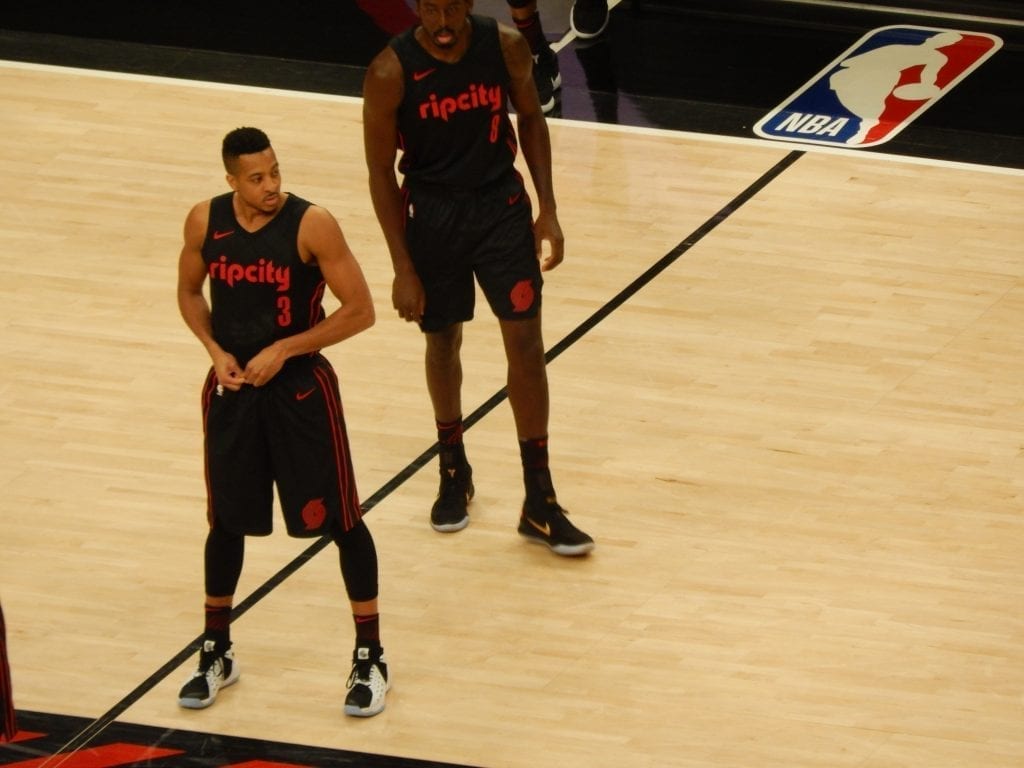 An NBA Player Practices Journalism Off The Courts, With Insider Knowledge Of The Game

Christian James (CJ) McCollum is not only a shooting guard for the Portland Trail Blazers averaging 17 points a game, but a practicing NBA journalist who researches, interviews, writes, and produces podcasts about what it is like being a basketball player.

McCollum’s special brand of insider journalism provides basketball fans with firsthand accounts about the game, both on and off the court, that even traditional sports journalists can’t uncover in reporting.

NBA players know firsthand what it is like defending an All-Star player. And only professional players know who really started a locker room scuffle after a tough loss or what songs are on the team’s playlist during practices.

Graduating with a Bachelor of Arts degree in journalism in 2013 from Lehigh University in Bethlehem, Pennsylvania, McCollum gained extensive exposure to journalism as the former editor for The Brown and White, Lehigh’s student newspaper, all while playing basketball at the university.

Since entering the NBA seven years ago, McCollum has put his journalism expertise right to work by contributing anecdotes, interviews, and columns to The Players Tribune, a media platform written solely by athletes offering reporting from the perspective of someone playing the game, not observing it from the stands or big-screen.

But as McCollum delves deeper into his career, will he be perceived as more of a George Foreman or a George Plimpton? Because he is an active player in the NBA rather than a retired athlete turned commentator, he represents a unique hybrid. Professionals in various fields from business to technology to politics contribute content to publications, just like McCollum, since they are masters of their own craft.

In his piece, “Why Journalism Matters,” McCollum writes about the importance of the media’s presence in  basketball, writing: “But I truly believe that the stories around the game are what make basketball so interesting. The media is responsible for making those stories come to life. The media is extremely important to me not just as an NBA player, but as a fan of the game.”

McCollum praises and respects journalism, especially the coverage of basketball, in knowing that the truth is distributed to the public. By giving a platform to write and produce quality work, he gives fans of the game valuable insight into what it is like living as an NBA player, not just how a particular game went.

Written for young NBA rookies coming into the league, McCollum’s “The NBA Rookie Survival Guide” details the highs and lows of what your first year in the NBA is like while also giving advice to young players, “Instead of wasting time playing NBA 2K15, learn from your peers on film when you have downtime. Steal some of their moves. There’s no excuse now.”

McCollum also writes about how important money management is when players get that first paycheck from the NBA, “You go from being a struggling, broke college student managing $5,000 a semester if you’re lucky to making a couple million dollars per year before taxes. One of the things you notice is that everybody’s problems become your problems,” which is a struggle many NBA rookies entering the league live through.

With the same idea in mind, McCollum has a recurring series on The Players Tribune “Rookie Vs. Intern”, where he chats with an NBA rookie to discuss what to expect in their first year. His other recurring series are interviews with the NBA commissioner Adam Silver where they discuss various topics relevant to the league.  While one may think this content is similar to an interview by a media member or sports journalist, I would argue it isn’t since McCollum is coming from the journalist perspective of an NBA player actively playing in the league.

McCollum breaks down a third wall in being a hybrid of a journalist and NBA player. Rookies are much more comfortable in chatting with a fellow NBA player who has shared similar experiences in coming up playing basketball in high school and college than say a journalist who hasn’t and just writes about basketball for a living. Adam Silver too, he answers questions differently since he is being interviewed by a player in his league, whom he takes into different account than someone from sports media.

In McCollum’s podcast “Pull Up With CJ McCollum”, guests of the show vary from fellow Portland Trail Blazers teammates (Damian Lillard and Evan Turner), to players he guards against in the NBA (Kevin Durant and Draymond Green), retired NBA players (Steve Nash), and other individuals not related to sports at all (Rapper Common and Writer Brian Koppelman).

With the help of his podcast co-host Jordan Schultz, of “The Boardroom”, McCollum and Schultz provide listeners with unbiased conversations on life on and off the court through the variety of guests on the show, while also fact-checking statements made during the podcast.

The Pew Center’s four core principles of Journalism are absolutely followed by the Portland Trail Blazers star. “An obligation to the truth”, which McCollum constantly produces through his quality articles. “Staying loyal to the public” which he provides in writing personal anecdotes on life as an NBA player as well through his podcast. “Verifying all the facts” done through fact checking on his podcast as well as done via The Players Tribune. And ”remaining as unbiased as possible” which McCollum proves through his variety of guests on his podcast from all angles of the NBA and other non-athletes.

Although McCollum is not a Basketball Analyst for ESPN nor a beat Trail Blazers reporter for the local Portland news, he is without question a valued journalist. He brings forth firsthand experience into what life is like as an NBA player in all its highs and lows. His special brand of insider journalism is unique from others in that it is personal and insightful.

Yes, it is a journalist’s job to uncover all the details of a particular story, but McCollum is able to come at it from a different angle as an active NBA player. He is able to uncover truthfulness in speaking with another fellow player who can relate on hitting a game winning 3 pointer in a playoff game while also relate to anxiety and depression that NBA players face.

CJ McCollum is not only an NBA player, but a practicing journalist who has mastered his craft both on and off the court.