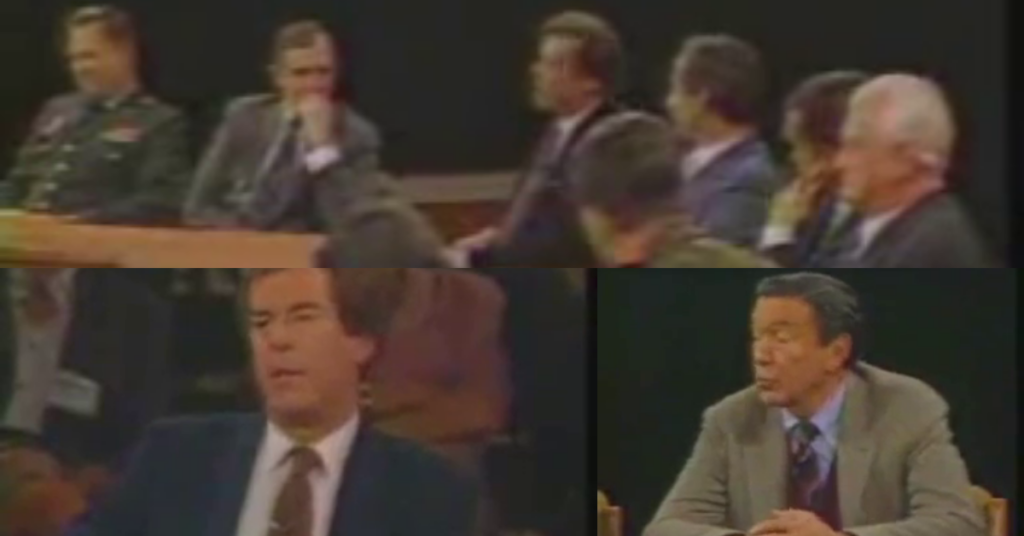 In the 1987 series, “Ethics in America,” Mike Wallace and Peter Jennings debate whether you are obligated, as an American, to save American lived in war, or whether it is your duty to cover what happens no matter what happens. [Credit: David Latchman]

In this week’s episode of the “Ethics Edit Podcast,” NYU students Natalia Borecki and David Latchman explore the ethical dilemma of covering war. In an imagined scenario, the U.S. is allied with the fictitious nation, South Kosan. An American journalist is embedded with North Kosan military, who are about to ambush American soldiers. Do you cover the event even though it means recording the deaths of American soldiers? Or, do you warn the Americans at the risk of your own life? Borecki and Latchman explore what either choice means for a journalist’s objectivity and what a journalist should do moving forward.

Natalia Borecki
In a 1987 series called “Ethics in America,” Harvard Law Professor Charles Ogletree presented the following hypothetical situation. Imagine a future war in which you are an American reporter embedded with enemy troops, and you learned that they were about to launch an attack on an American unit. What should you do? Should you warn the American troops or cover the story without getting involved? Even if it means recording the deaths of American servicemen?

David Latchman
This thought experiment was posed to reporters Mike Wallace and Peter Jennings, who had polar opposite reactions to the question. Peter Jennings initially responded that he would warn the Americans. While Wallace was at a loss, Jennings won’t have covered the story. When the journalists were asked whether reporters had a higher duty to save American lives rather than stick to the “journalistic ethic of reporting facts,” Wallace responded that he did not think so. Reporters are reporters first and foremost. This persuaded Jennings to change his mind and agree with Wallace,

I find it very difficult to believe, I’m astonished really to hear people say that. You’re a reporter. Granted you’re an American but you’re a reporter covering combat between North Kosan and South Kosan and the ally. And I’m a little bit of a loss to understand why because you are an American, you would not have covered that story.”

David Latchman
There’s a lot to pick apart here, no matter what conclusion you personally arrive at, whether you would do something to interfere in the ambush and save Americans or keep the camera rolling.

Intro
I’m Natalia Borecki. I am David Latchman. And this is the Ethics Edit Podcast.

Natalia Borecki
I think most people would instinctively lean towards warning the soldiers and saving the American troops the way Jennings did. That’s the human response. We, of course, want to save lives and prevent atrocities. So how can we better understand Mike Wallace’s reluctance to do so? Let’s start by diving a little deeper into Jenning’s reaction.

David Latchman
I think anyone who is on the same side as Jennings, and believes reporters are Americans first, it’s worth exploring the question, “why are you an American first?” One way we can do this is by switching things around. Instead, you’re following an American infantry, and they are bringing an attack on foreign troops. What do you warn your adversary? Or would you continue covering the event? If you want an American first and would warn American troops and not foreign troops because of this, what does this say about your objectivity and your bias in reporting? Are you doing your best as a journalist and telling people the truth. You also need to ask why you place American lives over doubt of non-Americans. You can be biased and have an opinion as a journalist on what you’re covering. We often think of war as being fought between a good side and a bad side. And we, unfortunately, tend to think of our own country’s side as the good one by default. Even though we may have an opinion on war and why we are fighting, we still need to be objective and truthful in our reporting. If you’re only going to do something where American lives are in danger, then you may not be as objective as you think.

Natalia Borecki
In order to understand Mike Wallace’s ethical framework, and why he chose to roll tape rather than save American lives, it’s important to understand that journalists are trained to pursue socio-political change by spreading information. A reporter’s primary vehicle for reform comes in the shape of a public that has been empowered with knowledge. A powerful example of this is Vietnam. If we look back at the Vietnam War, which was often called the “living-room war” for being the most publicized war in history. The flood of news coverage directly resulted in nationwide protests that ultimately ended the war. In an essay called “Vietnam the Television War,” Michael Mandelbaum writes that the fact that scenes from the war appeared regularly on television made it impossible for the United States to win in Vietnam. Regular exposure to the realities of battle is thought to have turned the public against the war, forcing the withdrawal of American troops. So in this sense, to reporters’ ears, the original hypothetical question sounds more like, “Should you save this group of soldiers or potentially end the war altogether by doing your job staying objective and informing the public?” Not an easy question to answer by any means. But if we factor in a reporter’s obligation to the public, Wallace’s answers start to make more sense.

David Latchman
I personally agree with Wallace. I think it goes beyond just the journalistic ethic of reporting the facts. We need to be objective and help people understand what is taking place and how an obviously brutal event affects people.

Natalia Borecki
I agree with you. Journalists are supposed to serve as watchdogs over public affairs and government, that means even in a warzone situation, a reporter’s obligation is to inform people back home about what’s going on. If they put national duties before their journalistic duties, it’s possible that a full and accurate picture of what’s really going on would never get to the public, and the war would continue longer than it should. To paraphrase the words of journalist John Hanrahan, a war without end is a war that doesn’t have any news coverage.

Outro
David Latchman
If we stop printing yourselves as Americans. First, how does this impact our reporting? And are we just gonna stop at saving American lives? Or do we only report on events that make American troops look good? The subject of war is both complex and emotional. Any journalist covering more is going to be emotionally involved and invested in some way. Whether that means looking towards the short-term goal of saving American servicemen or the long-term goal of reporting what happens, which hopefully ends the war. There are no easy answers, and we do the best we can as reporting these events.