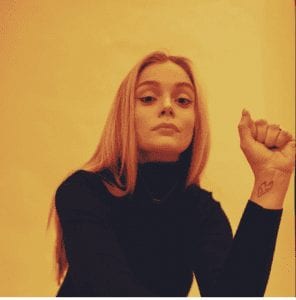 Audra Heinrichs is a political junkie and organizer ready to learn the art and craft of journalism at New York University’s master’s program. Heinrichs is originally from Toledo, Ohio and attended Ohio State where she majored in both Women’s Gender and Sexuality Studies and English Literature. At the age of 19, she decided that she wanted to pursue writing as a career to have the opportunity to share stories that focus on profiling human interest work and in-depth features.

Prior to applying to NYU’s journalism program, Heinrichs worked at various lifestyle magazines, but her passion has always been politics. In August, she received an exciting phone call from Bernie Sanders’ campaign asking her to help organize campaign engagements.

In between taking classes for her master’s

degree in journalism, Heinrichs will be on the road with Bernie Sanders’ campaign at various events. She’s ready to be busy and is especially excited for the Reporting the News class’s final project, where she will be in the field interviewing, researching, learning, and writing about a new community.

Heinrichs’ dream interview would be to profile feminist social-political activist, Gloria Steinem, who she not only admires but is also from the same hometown as Heinrichs. Heinrichs has met Steinem a few times and feels that she has a special connection with her and is fond of her work as a journalist and activist.