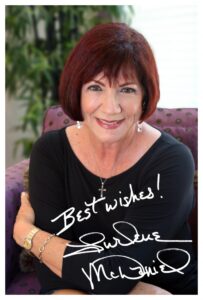 In the past 30 years, Lurlene McDaniel has published 70 novels. And now, she says, it’s time to take a break. The bestselling YA novelist announced her retirement at the end of 2019.

“I have loved my career,” she said recently over Zoom from her home in Chattanooga, Tenn. “It was a great ride.”

But now the world has changed, she says, and it’s time for “different writers with different voices” to take her place.

McDaniels’ early career began after her son was diagnosed with diabetes at 3-years-old.

“Nobody gets to give or pick what life gives to them,” she says. “I didn’t choose for my son to have diabetes, but you do get to choose how you deal with it.”

Her first novel, “6 Months to Live,” was published in 1985, and told the story of a 13-year-old girl who is diagnosed with leukemia.  It was an instant hit and was nominated to be placed in a 100-year time capsule located at The Library of Congress, to be opened in the year 2089.

Her 30-year career began with “6 Months to Live” which was published in 1985 and went on to win an award three years later. Ten years after she published her first book, she released “Don’t Die, My Love” which ultimately became the base for the tv film “A Champion’s Fight.”

Then in October 2019, McDaniel was flown to Florida where she attended a commemoration of her career at the University of South Florida. The showcase is called Taking a Legacy and includes much of McDaniel’s memorabilia, letters from fans and her books. McDaniel mentions that “the books will live in perpetuity, so-to-speak” and the books are still available to be checked out and viewed within the University library.

After the success of her first book, her agent would negotiate a contract for 4 or 5 books with an 8–12-week turnaround for each title. McDaniel paired with a researcher to ensure the deadlines were met and explained that her time was best spent writing, so she would provide a sketch of the outline for the researcher to gather information for each work.

McDaniel’s fanbase has continued, even as her readers grew up and had families of their own. Dorcas Szabo, now a 29-year-old mother of 4, read “6 Months to Live” when she was 13 years old and had just lost her mother to leukemia.

“I was in a dark place,” said Szabos, but the book “tugged at my heartstrings so much that it made me feel again.”

Shelley Headrick, who works at the Chattanooga Public Library, says that McDaniel helped establish what we think of today as Young Adult literature, a category that includes Judy Blume, S.E. Hinton, and Lois Lowry from her era, and authors like Angie Thomas and Sherman Alexie currently.

“I grew up during this sleeper stage of Young Adult literature, so seeing teens gravitating toward books written especially for their age was a thrill,” said Headrick. “She was there as the wave was taking off, and she continued to be relevant afterwards.”

Her books inspired young readers and addressed the lives of different ages, cultures and backgrounds. One such series, “The Angels Trilogy,” was published in 2002 and centered around an Amish family, their beliefs, their customs, and the impact they had on the lives of others.

According to McDaniel, the series was a big success, and the books are still selling well today in digital format. She received letters from Amish girls who had rarely seen themselves in print as young people and loved the series.

While McDaniel consistently wrote about difficult issues, she says her perspective changed after the 1999 shooting at Columbine High School.

“All of a sudden that era of innocence, it always comes and goes, but it was really gone when that terrible, terrible thing happened,” she explained. “I knew that my perspective was bleeding into my characters perspectives.”

McDaniel’s earlier novels focus on the tragedy of illness and the effect it has on her young characters and their loved ones, but since 1999 she began tailoring the stories to reflect the times.

And in her final novel “The Girl with The Broken Heart,” the main character struggles for some semblance of normalcy as she deals with the death of her sister and a father who has lost her trust while she pursues a veterinary career in rehabilitating abused horses while also dealing with a serious heart illness.

This most recent book reveals more resilience and tenacity than in earlier books. McDaniel says she wanted her readers to see the importance of strength and acceptance for the future.

While most of her books stem, in some respect, from personal experience – many involved research. Two such books center around a trip she made to Uganda after overhearing college students discuss a missionary trip they had just taken there.

During her trip she came away with two books: “Angel of Mercy” and “Angel of Hope,” stories that share in the experiences of sisters Heather and Amber whose journey to Uganda gives their lives new purpose.

McDaniel says she received letters following the publication of these books, stating their desire to follow in the fictional characters footsteps. “They had a heart to help and that’s how I always saw my generation of readers. They wanted to do something that would help impact the world.”

The final goodbye on Lurlene McDaniel’s website reveals the imprint she has left in the literary world.

“I hope to be remembered not only for the words I’ve written, but for what I leave behind.