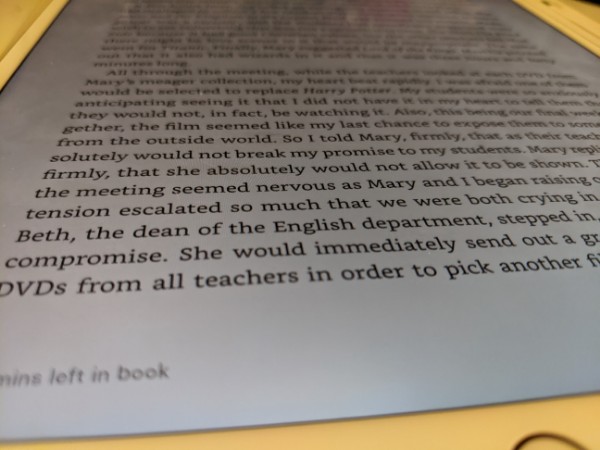 An eBook on the Kindle app [Credit: Lena Telep]

(DENVER)—Ra’mi Tiye Sekhmet is the author of the 2016 self-published book “The Veil,” currently for sale on Amazon.com. The novel is about a girl and hero from African folklore born from Orion’s Belt who was sent down to Earth to help humankind.

Sekhmet originally signed with the publishing company Create Space. According to a lawsuit filed last month, Create Space released her book and information to other sellers and without including her in related communications and transactions.

On Oct. 9, Sekhmet sued Amazon’s Kindle Direct Publishing in the U.S. District Court for the Southern District of Florida for breach of contract, money owed, and action for fraud. According to the complaint, Sekhmet entered into a written agreement in Dec. 2016 with Create Space, later rebranded as Kindle Direct Publishing (KDP). Sekhmet was responsible for marketing and releasing the book and paid out-of-pocket for the book cover, formatting, and edits, according to her suit.

The parties agreed to sell a print-on-demand version of the book for $2.67 each and at retail for $9.99. Sekhmet was to receive $3.32 for each book sold. Later, Sekhmet realized that Creative Space gave her information to a third party that opened accounts on Amazon, Abe Book, Ebuy, and Book Express, selling her book for as much as $103.99 each. Readers could not leave reviews and were instead prompted to pay $25-50 to comment, the suit alleges. On Sept. 12, 2017, according to the court documents, an online movie called “Veil”, based on similar concepts to Skehmet’s novel, a movie was released and sold online, without the author’s permission.

Create Space became part of Kindle Direct Publishing on Dec. 18, 2020, according to the KPD website.  On Dec. 10, 2018, Sekhmet moved her Create Space account to the KDP account. KDP stated that starting Dec. 10, 2018, Sekhmet would receive royalties owed, and KDP would look into her claims of the release of her book not approved by the author, the suit alleges, Sekhmet never heard back from KDP, and all calls to KDP went unanswered, according to the suit.

On Oct 13, Sekhmet’s case was dismissed by the U.S. District Court for the Southern District of Florida because the plaintiff does not live in that district and the defendant Amazon is based in Washington state.  Neither Amazon nor Sekhmet replied to The Click’s requests for comment.