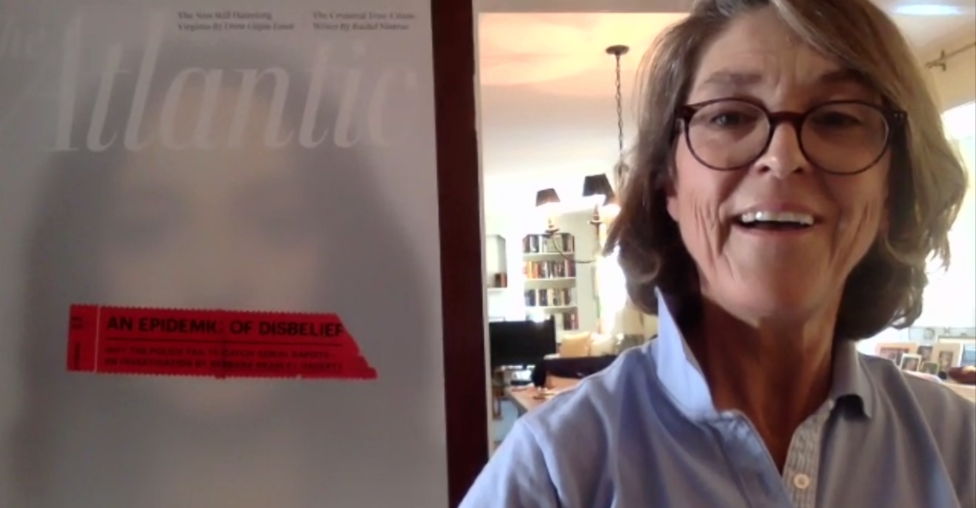 Hagerty with her cover story for The Atlantic [Credit: Lilian Manansala]

Hagerty with her cover story for The Atlantic [Credit: Lilian Manansala]

(WASHINGTON, D.C.) — Barbara Bradley Hagerty is an award-winning journalist, former NPR reporter, book author, and contributor for The Atlantic. Hagerty spoke with The Click about her August 2019 Atlantic cover story, Epidemic of Disbelief, about sexual predators and why police officers fail to catch them.

The Click: How did you come up with the idea of writing about rape kits and what were some of the obstacles you faced?

Hagerty: The first obstacle I faced was the fact that everyone knows about untested rape kits, but why are there so many untested? The reason I eventually discovered is that the police just don’t believe women. My second hurdle was how do I make this story new and different? You have to do a lot of reporting. I probably interviewed 50 rape victims. A dozen advocates—the government prosecutors, police. Finally, how do you form a coherent and simple idea? I began to get a breakthrough when I discovered the difference between what Cleveland was doing and what most other cities were doing. Once I had that contrast—a good guy and bad guy—it became a lot easier to do.

The Click: Since publication, what changes have you witnessed in the criminal justice system?

Hagerty: The article is used in advocacy now. Prosecutors are more likely to be open-minded and have used it to talk to police. I think my article galvanized police and prosecutors to do the right thing. It gave ammunition for the long-term argument.

I reinvestigated a man whom I felt was wrongly convicted, and he’s been in prison for 33 years since he was 22 years old. As a result, they’ve reopened it. This is a [pending] case where this guy may be freed, and that city may look differently at their previous convictions.

In the world of journalism, there’s a larger enterprise. And that is to seek truth, to get truth out there.

The Click: Do you have any advice for journalists?

Hagerty: This is going to sound really simple and kind of impractical in the age of COVID, but always interview in person. Don’t interrupt. Don’t do interviews via email. If you have to do Zoom or phone calls, that’s okay. What you want is to establish a relationship with every single source. That’s the key. Those are what make the stories great.

At the end of every interview, you should ask two questions. One is, “Who else should I talk to?” The second is, “What else do I need to know?” And I always keep in touch with my sources.

In the world of journalism, there’s a larger enterprise. And that is to seek truth, to get truth out there. If you can attach yourself to a place, an organization that you are proud of and you believe is serving the higher good of bringing truth out…maybe you’re not the one that has the byline, maybe you are working behind the scenes initially to help that truth come out, but you want that to happen. You want to be that person. And throughout your career, the idea is to keep is: This isn’t about me. This is about the reader. Is this the best story I can do? Is it full of integrity? Does it have insight? I think it’s a really important value. It’s really not about me. It’s about this larger idea of truth and the places that help you bring truth forward.