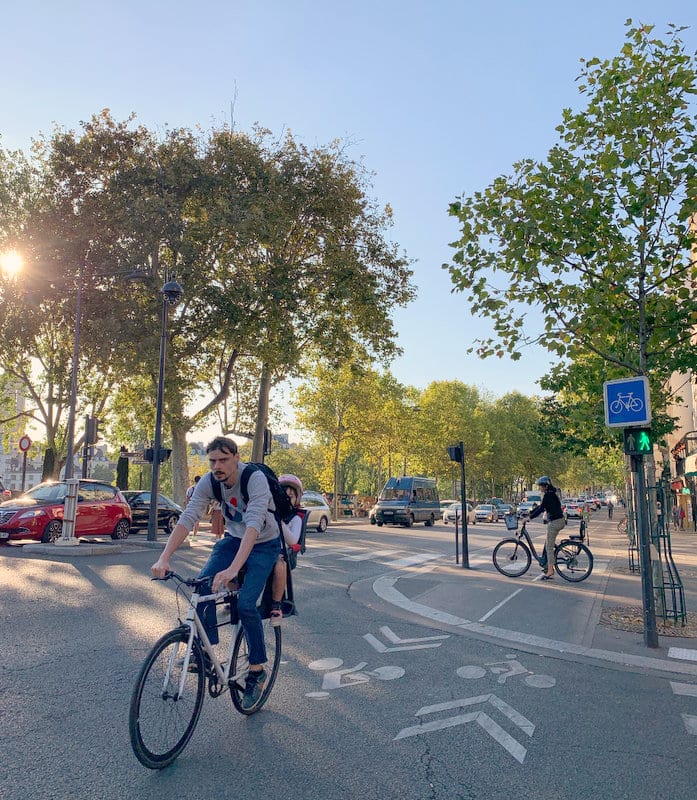 Cyclists on the new two-way cycle path along the River Seine across central Paris. Photo by Christina MacGillivray

Battle Between Paris Cyclists and Motorists Heats Up

French newspaper Le Monde wrote in 2017 that Mayor Hidalgo is waging a war against cars. In July 2019 the city banned older diesel vehicles from circulating within the larger Ile-De-France area surrounding Paris, a ban that impacted 60% of registered vehicles, according to Reuters.

Hidalgo, who is up for re-election in 2020, aims to make Paris the cycling capital of the world, similar to Amsterdam and Copenhagen. She has led construction projects to add 1000 kilometers of cycling lanes across the city by next year, all in an effort to transform Paris into a cyclist’s haven, reported France24.

There are roads and intersections that can use more attention. On the main express route running along the River Seine, cars have been funneled into a single lane causing major traffic. On Rue du Rivioli, one of the major commercial streets in Paris, one lane has been turned into a two-way cycle path, reported the Economist.

“The idea is to, little by little, move towards the pedestrianization of downtown, which, over time, will stay open to public transport, police, emergency vehicles and deliveries, but not to all vehicles,” Hidalgo told Journal du Dimanche.

Many Parisians are selling their cars as a result of the traffic delays caused by these changes, rather than being motivated by the spirit of the Mayor’s environmental mission. “I just sold my car because of the new cycle lanes,” Parisian resident Alex De Mortemart said. “It’s become too painful to get around town.”

“Those who switch to cycling realize their quality of life improves, provided their route is safe,” the Mayor told Journal du Dimanche.  “It is also faster to get around town by bicycle than by car.” But cycling may be easier for residents of Paris’ posh central neighborhoods than for those commuting from suburban areas outside the heart of the city.

“It’s less popular in the suburbs, where more people depend on cars to get into the city,” said Anne Désérable, a climate advocate in Paris.

However, suburban residents live outside of Mayor Hidalgo’s constituency, which only covers central Paris, where the cycle paths are favored by many left-leaning Parisians. In the center of the city, the cycle paths are expected to be a boost for her 2020 campaign.

“It doesn’t make sense to own a car in Paris anymore,” Désérable said. “That’s a good thing for reducing pollution. But that doesn’t mean it’s popular with everyone.”