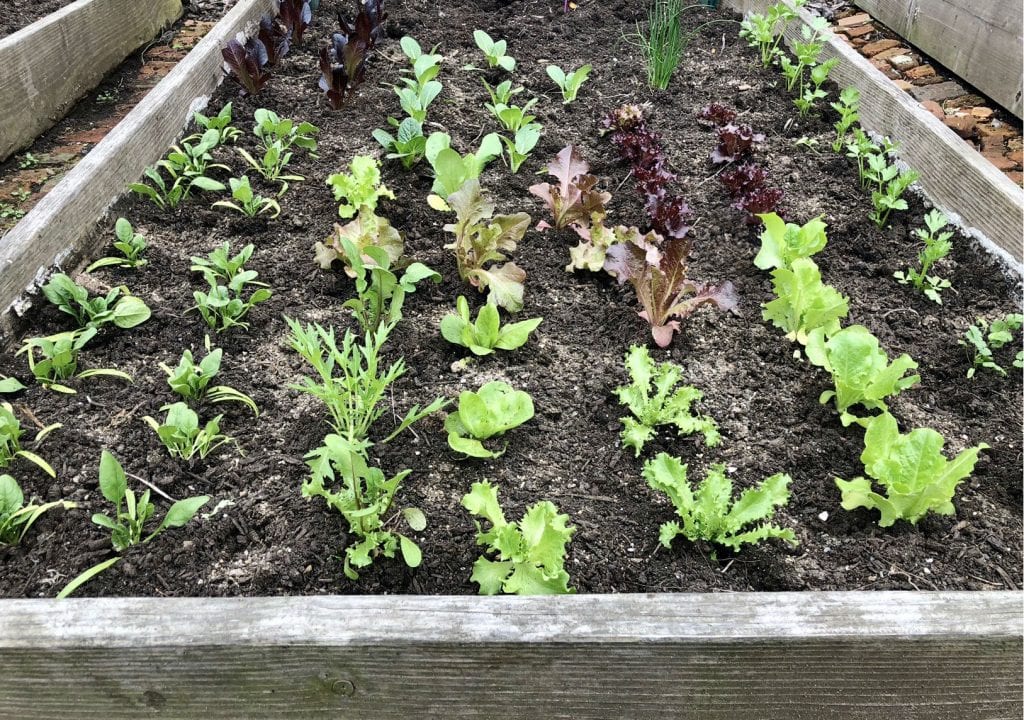 NEW YORK — Nicole Haile was gardening at the Patchen Community Square in the Bedford-Stuyvesant, Brooklyn when a woman in well-worn clothing hesitantly approached. Haile, who says she greets everyone who comes through the gate, thought the woman was hungry.

“She was so excited about the garden,” said the 28-year-old mom of one. “And I offered her anything that she could carry.”

Haile came to Bed-Stuy two years ago with her husband, who has lived in the neighborhood for two decades. Community gardens like Patchen, where she’s a member, create their own modest efforts to increase food access.

“The garden is so vital … because, you know, this is a space where we’re growing a lot of our own food,” she says.

With its tree-lined streets and century-old brownstones, Bed-Stuy is a hotbed of NYC history. As one of Brooklyn’s most populous neighborhoods, this 2.8 square miles of central Brooklyn is a multicultural landscape dotted with parks and gardens, places of worship, recreation centers, ethnic eateries, and a swell of new business.

Why, then, is fresh, healthful food so hard to come by?

“There’s a self-fulfilling prophecy that, because there’s a lot of fast food and bad food in black neighborhoods, that that’s what black people want,” says Rae Gomes, a decade-long Bed-Stuy resident, and former Food Justice Coordinator at the NYC Department of Health and Mental Hygiene (DOHMH).

“For generations and decades, black people have been fighting for fresh food in their communities,” she says. “Most people know they need to eat more fruits and vegetables.” Gomes, now a nonprofit program manager at WhyHunger, believes that poor accessibility in Bed-Stuy, where 81% of people are people of color, is a result of systemic racism.

The Social Sciences Research Council (SSRC) estimates that nearly 26% of Bed-Stuy is considered food insecure, meaning residents have limited access to nourishing food. There, 29% of people drink 12-ounces or more of sugary beverages per day, and 16% report that they haven’t consumed a fruit or vegetable in the past 24 hours, according to a 2018 DOHMH report. But considering that Bed-Stuy boasts just one supermarket for every 57 bodegas — what non-New Yorks call a convenience store — where the most prominent food options are potato chips and soda, eating healthy can be a challenge.

As a result, compared to the whole of New York City, the DOHMH found that Bed-Stuy’s residents suffer higher rates of premature death caused by cancer, heart disease, and diabetes.
Raina Kennedy, a community organizer with Brooklyn Movement Center, is critical of the city’s efforts to address these issues.

“A lot of [city funding] goes to nutrition education programs and stuff that doesn’t really get to the cause of the problem, but is easier to measure and looks really shiny,” says Kennedy. Much of this “ignores the knowledge that people already have [about healthy eating].”

But if they can’t afford the food, she adds, “then there’s no point.”

For example, the Green Cart Initiative, established by the city in 2005, was supposed to be for neighborhoods that “have limited access to fresh produce,” while also supporting small business owners. But in 2014, Columbia University researchers found that, despite having the second highest number of sanctioned precincts for Green Cart distribution compared to other boroughs, Brooklyn had the fewest carts. Their report also revealed that those vendors were primarily located in the western section of Brooklyn, leaving out neighborhoods to the east, including Bed-Stuy, where there is a higher concentration of public housing.

Residents complain that the already limited number of grocers aren’t serving the needs of the neighborhood, where just over 21% of residents (around 33,000) are below the NYCgov poverty measure.

“Gentrification is bringing people in who are demanding more organic, more better quality produce, which is going to be really expensive,” says Haile. “I, myself, [sic] have to go to stores elsewhere in Brooklyn where it’s more affordable.”

By contrast, some small grocers and bodegas carry produce that is “often moldy or not fresh,” she says. “That’s not really something acceptable to offer to your community.” 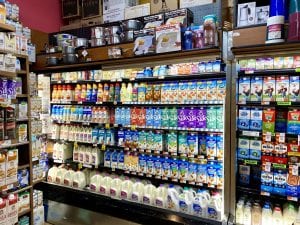 At one small grocer in Bed-Stuy, the juxtaposition between the poor produce selection and the wealth of pricey specialty food — such as $7 milk — is incongruous. 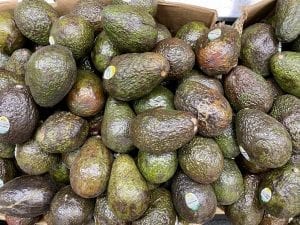 An abundance of poorly ripened avocados, likely due to their uneven ripening. They’re currently on sale at 99 cents each. 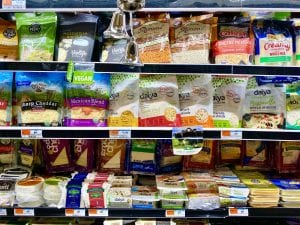 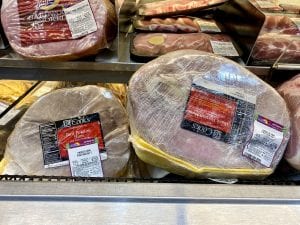 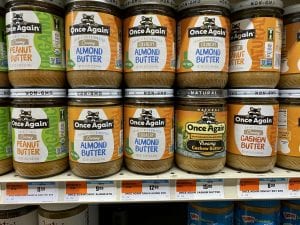 Jars of peanut butter for upwards of $15 each. 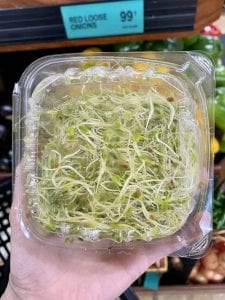 According to one study by Hunter College’s Food Policy Center, a pound of green beans or a head of lettuce could cost five to 50 cents more in “poverty” as opposed to “non-poverty” neighborhoods. This finding is supported by CUNY’s Urban Food Policy Institute, who argues that distribution hubs may be unwilling to accommodate the community, either because of “perceived low demand, limited purchasing power, and higher operating costs.”

While the sum of food stores is increasing, Bed-Stuy has become a prime example of supermarket “greenlining,” which refers to a trend of self-proclaimed “luxury” grocers that target rapidly gentrifying neighborhoods with increasingly upper-income shoppers and sell top-dollar brands at prices not commensurate with the neighborhood as a whole.

“The problem is so complex that it’s going to take a complexity of solutions to resolve it,” says Yonnette Fleming, farmer, teacher, and self-described “healer” at the Hattie Carthan Community Garden, a Bed-Stuy mainstay for nearly 30 decades. Meaningful change, she says, starts with promoting food sovereignty in her neighborhood through community-led efforts: “There need to be resources for community work in the hands of the community.”

Many in Bed-Stuy turn to food pantries to supplement their diets, but Fleming complains that publicly-funded pantries are filled with processed, high-sodium foods, which only contributes to the community’s health concerns. She, like Haile, hopes to promote gardens like hers “to subsidize their budget, meaning even if they’re getting pantry food — something from the government that is destroying their health — they can also grow something fresh.”

Unfortunately, even volunteer-led gardens like hers are under threat by GreenThumb, a NYC Parks division charged with supporting them. Ilene Richman, an organizer at Patchen and longtime educator, explains that the new Community Garden License Agreement and GreenThumb Gardeners’ Handbook contained unrealistic terms for modest, volunteer-based gardens.
“It was constructed … with an expectation that [gardens] would sign because what choice did they have?” says Richman.

“There was a fear that people would be locked out [of their gardens],” she continues. “That’s not how you get people to come to an agreement — through fear.”

On Oct. 31, 13 Manhattan elected officials made a public plea to NYC Parks’ GreenThumb to sit down with the community garden leaders and negotiate. So far, says Richman, despite a brief protest, a majority of the 600 gardens have signed the new contract. Patchen is currently in the minority with only a couple dozen holdouts.

So far, GreenThumb has refused to come to the table, says Richman; “I think an overarching goal is just please sit down at the table with us.” 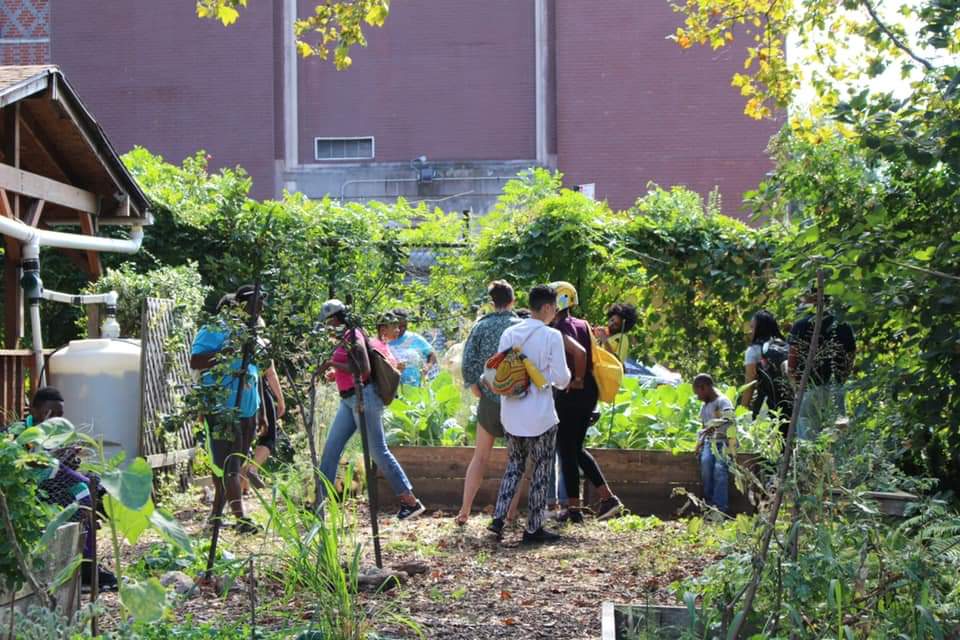 Gomes and Kennedy think an assertive step toward “food sovereignty” — and keeping the city at a smart distance — might be through a community-owned grocery store. The two of them, along with their board of directors and a team of organizers, wrapped a crowdfunding campaign last month to build the Central Brooklyn Food Coop (CFBC). By early 2020, they hope to open the store to their already over 100 members, many of whom have been on-board since development began six years ago. Since the fundraiser began on Oct. 16, they’ve already raised $52,109, well over their $25,000 goal, and are now in search of the right commercial space in Bed-Stuy.

“I just think there’s so much power in gathering together,” says Gomes. “Every single major civil rights issue … started with people gathering and talking with each other and finding their own solutions to the problems they find in their community.”

Haile, too, says she’s “excited” for CFBC, and hopes it “sets a really good precedent.” In the meantime, community gardens like Hattie Carthan and Patchen Square will be there, with their gates open as often as possible to anyone in need.

“It’s so important for us to share the bounty that we have with other people in this neighborhood,” she says. “The first thing I always say [to visitors is], ‘What can I share with you? What would you like to take home?’.”