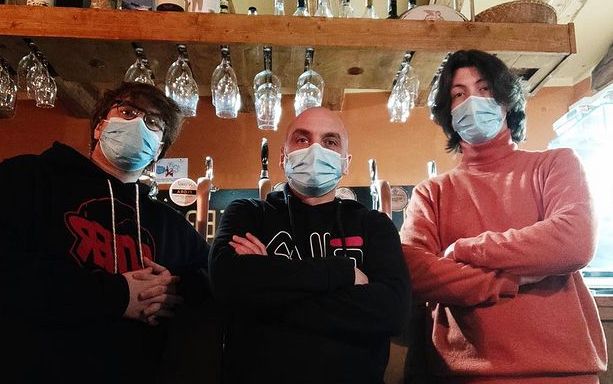 (TREVISO, Italy)—I sat at the very last table opposite the pub’s glass window entrance awaiting my strawberry sour beer. It arrived in a clean and sober stem glass with a coaster showing someone licking beer foam from his mustache. I laughed, smelled the fragrant beer, and had my first sip. Electrifying.

Birre Treviso is one of the most popular pubs in the small town of Treviso, near Venice. Founded in 2016, it welcomes young people every evening for its “aperitivo” with craft beers and small homemade panini. On Sundays, families sit around its rectangular wooden tables enjoying Italian focaccia with a homemade pink sauce containing five secret ingredients that only Stefano Bigaglia, the owner, and two employees know.

The pub is small but welcoming, with few stools inside and a colored bathroom door that exudes a ‘90s vintage style.

On March 9, 2020, Birre Treviso was forced to close temporarily due to the pandemic. The measures taken were drastic: a nationwide lockdown with people prohibited to gather in public and permissions needed for essential travel. More than 133,000 people have died from COVID-19  across Italy, according to the World Health Organization. Greenpass, the European proof of vaccination, is now required to sit inside any bar or restaurant throughout Italy.

“We suddenly found ourselves with no earnings and loads of expenses,” said Bigaglia when I asked him what was the first impact of the lockdown on the life of the pub. “Help from the government was minimal, it was less than our average costs,” he continued. “When measures became less strict,” and Italy was divided into zones—white, yellow, orange, red— “we had to completely revolutionize our way of working and adapt it to the new regulations. We had to open at lunch and close at 6 p.m. We began to make more and more panini and focaccia because no one drinks that many beers before 6 p.m.”

Months later, much has changed. Three customers, sitting two tables from mine, told me how their drinking became almost a habit during lockdown. “We changed our aperitivo time from being 6 or 7 p.m. to 2 or 3 p.m., and then we would drink quicker because of the pressure of the curfew. And when the pub closed we would ask for to-go bottles so the drinking didn’t really stop at 6 p.m.,” said a 25-year-old regular customer who was sipping an APA, the pub’s signature beer.

Andrea Riviello, one of the employees who knows the secret sauce, told me how he was struggling to be on government payroll subsidies that made him receive only 70 percent of his usual salary. “It was terrible. I had just moved to my own apartment, and I had so many expenses I couldn’t afford anymore.”

It was like that for three or four months, according to Bigaglia. “The expenses included the rent and electricity,” he said, “and they were high. We had to put all of our beers in refrigerating rooms so that they wouldn’t go bad. We lost so much but hopefully, in a couple of years we will recover.”

Birre Treviso was lucky because it was growing just before the pandemic. It had numerous, regular clientele that filled its 80 or so outdoor chairs almost every night. Inside, the pub is small and only hosts a few people. This turned out to be a strength both during and after the restrictions for people who tend to want to sit outside even today because of the Green Pass requirement.

As I was finishing my strawberry sour beer, the pub started filling with regular customers who knew exactly what to order. Some of them, however, wanted something new and asked for suggestions on the latest craft beers the pub had to offer. The servers clearly knew their customers and what they would enjoy. With a homey and friendly atmosphere, Birre Treviso is a place to which people come back.