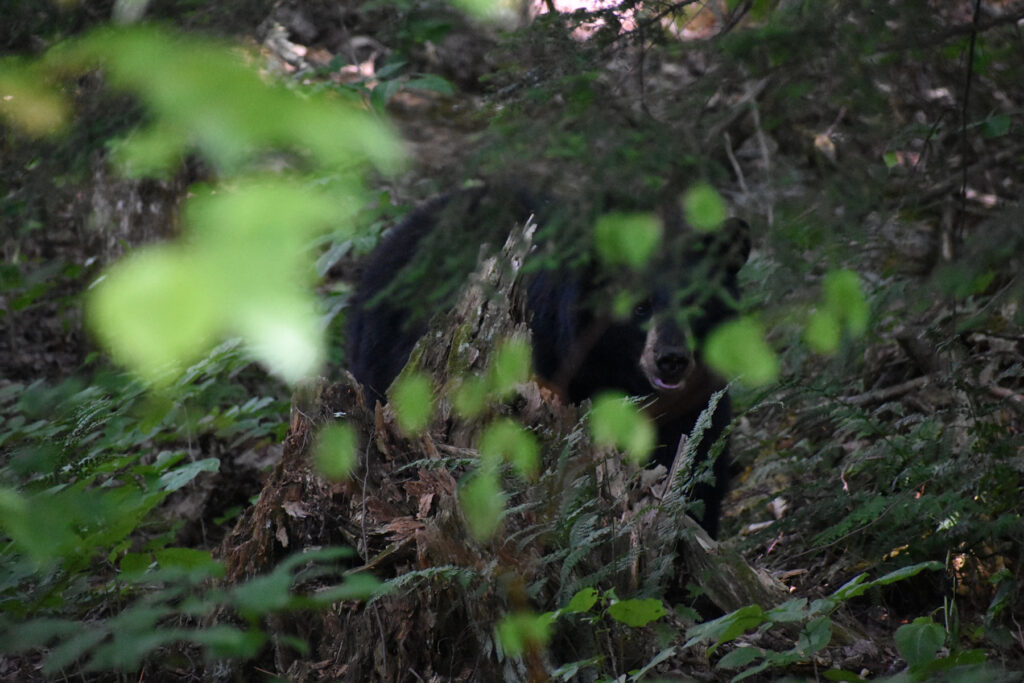 A portrait of an American Black Mother Bear in the woods. [Credit: by Joe Gerry]

In Vermont, Black Bears are Coming Out of the Woods

Residents and tourists are seeing more black bears in the resort town of Stowe in northern Vermont.  While the reason for the spike in sightings is unclear, wildlife officials are striving to keep the people and bears safely apart.

There are more than 1500 reports of bear sightings statewide this year, according to The Vermont Fish and Wildlife Department. The greatest number of reports have come from Stowe, which tripled since last year from an average of 23 complaints in past years to more than 85 reports as of the end of August.  Forrest Hammond, the department’s black bear project leader, says the bear population in Vermont has not increased — only bear sightings. He believes that bears are traveling beyond their natural habitat in search of food due to a scarcity of berries and nuts likely caused by drought. 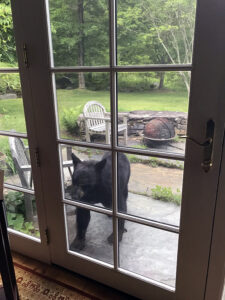 A wildlife biologist specializing in the American black bear, Hammond says that easy access to unsecured human food and trash are drawing bears out of the forest. Some bears have entered homes, cars, trash bins, and dumpsters in search of food. “This is a big concern,” he says.

If a bear develops a habitual taste for human food and trash and returns to one or more homes, the department will take more aggressive methods, like tasing or killing the animal, Hammond says. “Our first and foremost concern is the safety of the people, then the bears.”

With an influx of newcomers and more families working from home since the pandemic, food consumption has increased, and people are not disposing of their trash correctly. If a bear has easy access to human food and trash, they will return, says Hammond. A bear can become aggressive in its pursuit of food, although, he says, the last time a Black bear killed a human being was during a hunting accident in the 1940s.

The wildlife department regulates the bear population primarily through hunting and public education. One challenge is educating residents and visitors about safety measures, like bear-proofing and making loud noises, Hammond says.

“To maintain a healthy bear population you need to make your property unattractive to bears. Families need to take down bird feeders until December and properly store garbage where bears cannot get to it,” Hammond said. “They also need to learn how to compost properly…and secure chicken coops with electric fencing.” 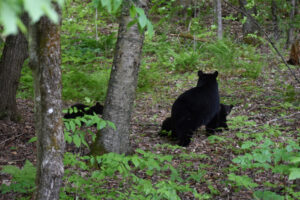 Unable to find food in the backyard, a mother black bear with her three cubs returned to their natural habitat. [Credit: Joe Gerry]

Photographer Joe Gerry, a Stowe resident, saw a mother black bear with her three cubs near his porch. Since his trash is secured, they did not return. Local resident Lindsey Lafrance saw a bear climbing in the dumpster near her apartment at dusk and, as a result, her landlord successfully placed pallets on top of it to keep them out.

Some local residents and organizations are concerned about the safety of bears in Vermont. Protect Our Wildlife (POW) is a volunteer-based, non-profit organization in the state leading efforts in Stowe to mitigate conflicts between humans and bears.

POW President Brenna Galdenzi explains,  “As long as we leave out easy food for bears, they’ll show up, as evidenced in multiple studies on the topic. Vermont’s vast landscape can accommodate more black bears; the limiting factor is what humans will tolerate. There needs to be broad compliance by communities to reduce bear attractants, and we have not seen that, and bear families are paying the ultimate price.”