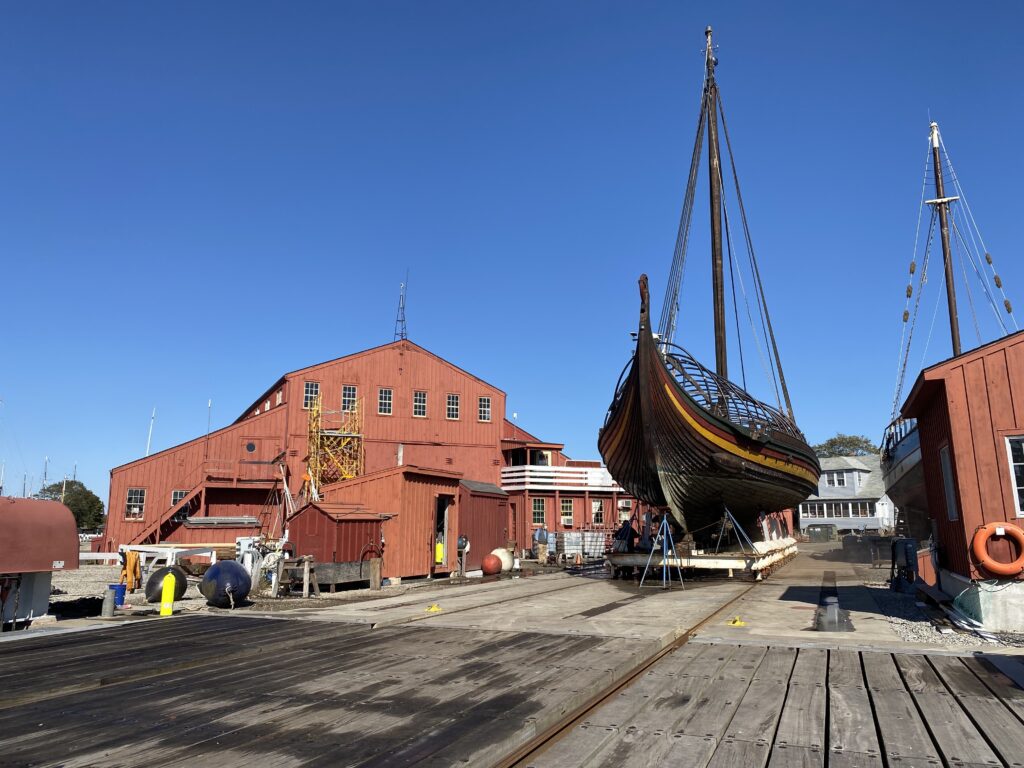 (STONINGTON, Conn.) — A maritime museum that’s home to boats dating back to the mid-1800s might soon be underwater — and it’s a sign of how climate change could affect the future of the Connecticut town that borders it.

Mystic Seaport Museum is nestled on the southeast coast of Stonington, a town of about 18,500 where the maritime industry flourishes.

The museum sits on about 19 acres of land. It hosts a recreated New England coastal village and formal exhibit halls. Chris Gasiorek, vice president for watercraft preservation and programs at the museum, said the land it sits on was once two shipyards. 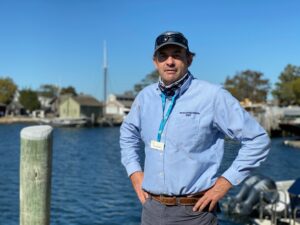 On a Wednesday in October, Gasiorek stood on the gravel on the edge of the shoreline and pointed at a few puddles on the ground. He said these were clear signs the land is flooding more now than it has before.

“You never build a shipyard on a mountain,” he said. “You build it as close as you can to the water, which now is an issue.”

During extreme weather conditions like nor’easters — powerful flooding storms that strike the northeastern coast of North America — a couple of the docks that make it possible for employees and museum-goers to get to the boats can become submerged if the tide is high enough.

Gasiorek looked out over the skyline with water on his mind. Water is always on his mind.

He compared the area’s flooding two years ago to Hurricane Sandy, the mega-storm that wreaked havoc across the Caribbean and the United States’ east coast in 2012.

“There is no silver bullet,” Gasiorek said. “From global reduction of carbon emissions, to local community engagement, to a mix of strategic abandonment and targeted adaptation, we can all work together to save the waterfront cultural and heritage sites in our communities, and especially here at Mystic Seaport Museum.”

It’s a snowball effect that impacts this business, the town’s community, the state of Connecticut, and ultimately, the world.

Global warming leads to sea-level rise when ice sheets and glaciers melt, adding to the water volume, according to NASA. Waters are rising at a rate of 3.3 millimeters per year. While that might seem like a small change, even a slow rise in water levels can lead to massive flooding.

Greenhouse gases like carbon dioxide trap heat in the atmosphere, causing an increase in global temperatures. The planet gets too hot for ice to stay frozen, which melts into the seas and raises them higher. Think of the planet as getting a fever — and humans being part of the cause.

Gasiorek has spent the three years he’s been at the museum figuring out how to keep it from flooding. 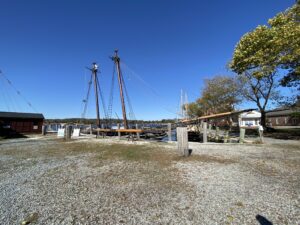 “Obviously we realized that in order to reimagine what this part of the museum would be, we would also need to take into account sea-level rise and climate change,” he said while standing in the museum’s main courtyard.

Just behind the massive sailboats floating in the river is a roughly six-foot stone wall. A clear line runs across it about four feet from the bottom marking how high the tide regularly gets at peak.

“When you look at our sea-level-rise forecast maps, Mystic is going to be the nearest problem,” said Rick Norton, chairman of Stonington’s Climate Change Task Force. Locals formed the volunteer group in 2015 to keep themselves informed about the climate crisis.

Norton predicted that just about everything on Route 27 West, a local north-south highway that runs just over three miles, will one day be flooded.

In search of solutions

The Mystic borough sits on the border of Stonington and its neighbor, Groton. Because of that, the towns have to band together to successfully fight the destruction that flooding could cause, Norton said.

Groton doesn’t have a climate-specific team, but town leaders do work with Stonington groups to take care of Mystic and any nature zones that cross town lines.

One way people have begun to adapt after flooding is by raising buildings. Norton acknowledges that this isn’t a permanent fix. He said the question then becomes whether adaptation is enough to fight the impacts of global warming.

“When you raise buildings up, it’s more for protecting against the hurricane or storm surge,” he said. “It’s not meant for a permanent solution to sea-level rise because you can raise the building up and it’s protected, but people still can’t get there because the ground is going to be flooded.”

Gasiorek also agreed with that conclusion. Tracing a circle in the air, he said they could easily build a wall around the museum. But if the roads flood and it stops people from reaching the museum grounds, those walls wouldn’t do any good.

“The boats are easy, they go up,” he said. “But it’s how we get to them. So, do we put in raised walkways? Do we raise the docks? Part of it is, you can’t just solve it by raising everything.”

Visitors can pay to keep their boats near the museum, which is a source of revenue for the business. However, docks for visitors are lower than the ones holding the historical vessels. That means paying customers would have no place to store their boats if the area flooded, leading to a loss of important income.

Looking to the future

There are four villages that make up Stonington: Pawcatuck, Lords Point, Wequetequock, and halves of Mystic and Old Mystic, all of which are in danger of going under.

“All four of our villages are somehow going to be impacted by sea-level rise,” Norton said. “And even if we can get carbon emissions under control, seas are going to continue to rise because it’s not something that’s going to stop unless the governments address carbon emissions.”

“It’s hard to say, ‘Well, this is making a difference,’ but every little bit helps,” he said.

Though there might not be one specific way of reversing climate change on a local, state, or global level, Gasiorek believes some form of change is still possible.

“There is hope,” he said. “With a micro, local, and regional approach to adaptation, we can find and implement various solutions. It will be hard work over a long period, but the commitment is there.”