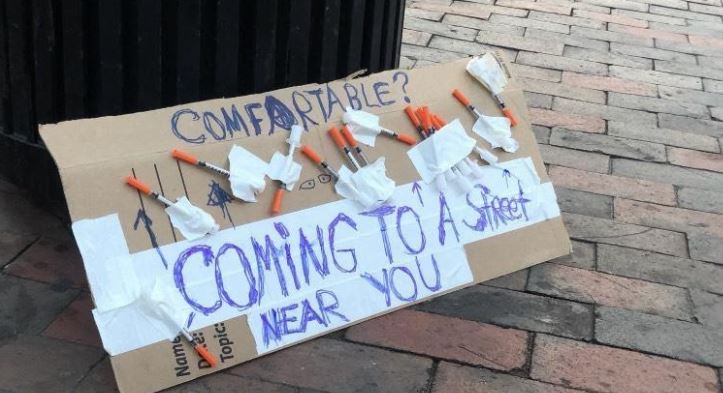 A homemade sign from a Boston protest against drug addiction on September 2020. [Credit: Danielle Saitta]

(BOSTON, MA) – In Boston, people struggling with drug addiction could once say they knew what the road to recovery looked like: It was a 3,400-foot bridge out in the harbor.

Hundreds of people would travel on the bridge by bus to receive services from Long Island Recovery Center. Originally, the center was built as a hospital for the chronically ill. It served in that capacity for decades until it transformed into a place of recovery with a multitude of programs for people suffering from drug addiction.

While in operation, the center housed 450 homeless people and provided substance-abuse programs to over 200. However, the bridge to the island that housed it became dilapidated and was deemed unsafe by the Massachusetts Department of Transportation. Mayor Martin Walsh of Boston closed the 64-year-old road in 2014 with a promise that it would be restored one day.

According to Mayor Walsh’s press office, there’s a multi-million-dollar plan to reopen it. However, with homelessness and addiction on the rise in the Bay State, many worry that those who need urgent help may not live long enough to get it.

Dozens of recovery programs like Long Island Recovery Center exist in some of the state’s larger cities, including Boston and Quincy. According to employees at A New Way Recovery Center in Quincy, the closing of Long Island was a life-changing experience for many.

“Hundreds of people were suddenly displaced. It is kind of like being kicked out of your apartment. At that point you think, ‘Where do you go?’” said Warren Nicoli, the program director for A New Way.

According to Boston’s 2019 Homeless Census Summary, there were 2,348 single adults who were homeless, a 0.3% increase from the previous year. 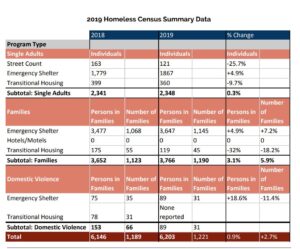 While a 0.3% increase may not seem like a lot, former addicts like Ashley Tenczar say that the effects of that sort of increase can be seen every day in the city.

“It’s shameful because in some parts of this city, you think it’s a different place,” Tenczar said. “People are trying to get to their appointments in Boston Medical Center and people are stepping over hypodermics. There are dead people overdosed, slumped over or almost dead. It’s not right.”

In 1996, Tenczar left her family home and her young son, Damian, with her parents in Westborough, a town about 40 minutes outside of Boston. Tenczar struggled with heroin addiction for years and decided to receive treatment in the city. To fight her addiction, she cycled through countless recovery programs, including Long Island Recovery Center.

“I remember the staff being excellent. I met a social worker on the island who got me into this addiction treatment center called Women’s Hope. It helped so much because I remember being sent there from Long Island Recovery Center,” she said.

For 14 days, she was given a place to rest and recover off the streets as long as she worked with a social worker.

“It was like you had a place of your own,” she said.

According to Tenczar, Long Island provided shelter and programs to get you into detox. She said that being away from places rife with drug activity was what helped her recover.

“That feeling of being away from the city, on an island in the middle of the harbor gave you this feeling of being clean and a feeling of security. If you were in a shelter on the island or in a detox program, you were away from Boston which was so much more effective than walking out of a center in Boston being back on the street with the drug dealers and the temptation,” Tenczar said. 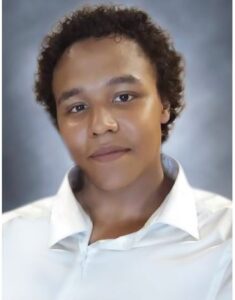 Once clean, she learned that her son Damian had picked up her heroin addiction. She advised him to come to Boston so he could receive treatment. But Tenczar struggled to get Damian into the right programs. According to Tenczar, there were some programs where he was accepted, but often he was turned away and told to come back later.

“Addiction doesn’t work like that. You get a window of clarity and either you get well then or it passes you by,” Tenczar said.

Long Island Recovery Center had closed its doors by the time he arrived in Boston. On July 31, 2020, Damian was fatally stabbed in the neck while on a strip with heavy drug traffic known locally as “Methadone Mile.” Police arrested 34-year-old Cesar Valentin, who has been charged with murder.

That tragedy drove Tenczar into activism. She now rallies for better drug treatment in the city.

For years, Boston has been suffering from a drug epidemic since the introduction of the man-made opioid Fentanyl.

“I think when Fentanyl was introduced years ago, it made a big impact on the community, particularly the heroin users,” Nicoli of A Better Way said. “It has taken a lot of people out. It has just destroyed lives.”

According to the Centers for Disease Control and Prevention, Fentanyl is a severe-pain reliever that’s 50 to 100 times more potent than morphine. In 1959, a company called Janssen Pharmaceutica invented the synthetic opioid to alleviate pain for ailing patients. Fentanyl is still used in hospitals to treat pain from operations. In recent years, the CDC has found that the drug is also being used outside of hospitals.

“Most recent cases of fentanyl-related harm, overdose, and death in the U.S. are linked to illegally made fentanyl,” the CDC states on its website. “It is sold through illegal drug markets for its heroin-like effect. It is often mixed with heroin and/or cocaine as a combination product — with or without the user’s knowledge — to increase its euphoric effects.” 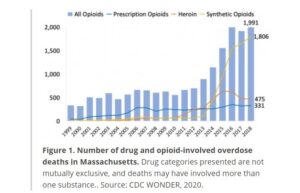 According to the National Institute on Drug Addiction, there were around 1,800 Fentanyl overdoses in Massachusetts in 2018. In that same year, NIDA also reported that 88% of drug overdose deaths in the state involved at least one opioid.

Clifford says there are multiple reasons why someone becomes addicted to a substance, and that it often stems from emotions.

“There’s depression, anxiety, not feeling good about themselves, deep-rooted family issues from when they were younger,” Clifford said.

While the city provides service tents and walk-in programs, some people believe that more should be done. Tenczar believes Boston public officials are “throwing pebbles at a tsunami.”

“You hear the phrase often, ‘beds, not Band-Aids,” she added. “That’s what these people need, help.”

A BATTLE OVER RELOCATION

Last year, local newspaper the Patriot Ledger reported that the mayor had a $92 million plan to fix the closed recovery center. Unfortunately, there’s a roadblock in the construction plans. The recovery center was built on Moon Island, a piece of land that belongs to the city of Quincy. According to Thomas Koch, Quincy’s Mayor, Walsh had reached out to him before announcing his restoration plan and the two did not see eye to eye. 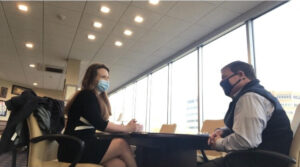 “My issue was not restoring the programs on the island; my issue is with the bridge, because all the traffic comes through a very narrow road and some very residential neighborhoods of my city,” Koch told The Click.

In addition to the traffic, Koch says that some neighborhoods close to the train station were being negatively impacted by the recovery center.

“Our neighborhoods around the Quincy train station were experiencing some levels of breaking and entering. People were stealing, looking for money to feed their habits. This was a big issue because the vans from Long Island would go to my city’s train station and pick up those who wanted to go to the island,” Koch said.

He believes there is a better solution to travel to and from the island.

“I’ve suggested that they look at water transportation like many harbor communities do across the world. Nantucket and Martha’s Vineyard are good examples of that,” Koch said.

In 2018, a lawsuit was filed by the city of Boston because Quincy had denied a wetland permit for the restoration of the Long Island Bridge project. According to Boston.gov, Walsh made this statement in late August about his plan to restore the recovery center:

“The positive impact of a recovery campus will be felt far and wide. It will take those suffering from substance disorders off the streets, not only of Boston but also of Quincy and all our neighboring cities and towns. More importantly, it will help them return to their families and communities more whole and better equipped to continue rebuilding their lives.”

Unlike Walsh, Koch is not married to reopening the recovery center on Moon Island. He believes that the $92 million that would be used to restore the bridge could be used to build a new state-of-the-art campus in another part of the city. Recently, he has spoken to Governor Charles Baker about his proposal to build a new center and how the money could be better spent.

“I’m not so sure why we are so hung up on banking everything on an island approach,” he said. “We have an awful lot of acreage on the mainland where that money being used for a bridge could be going into an incredible facility.”

Koch also added that this new facility could even provide key programs to help addicts re-establish themselves into society if it used funds meant for the bridge restoration.

“Many times, when these folks get clean and they head back out, there’s no job for them. There is no hope, and they fall back into their old ways,” Koch said. “We need to be mindful of that approach with more job training and opportunities for these folks to get a hand up, not a handout, to be a productive member of society.”

Koch said that he is waiting to hear from Governor Baker about his proposed plan to build a new recovery facility instead of rebuilding Long Island. Baker did not return a request for comment.

UPDATE: (12/9/20) On Wednesday, December 9th, Suffolk Superior Court ruled that the Long Island Recovery Center can be restored by the City of Boston. Currently, there’s been no word of when construction can start. The Mayor of Quincy has not responded to this news at this time.