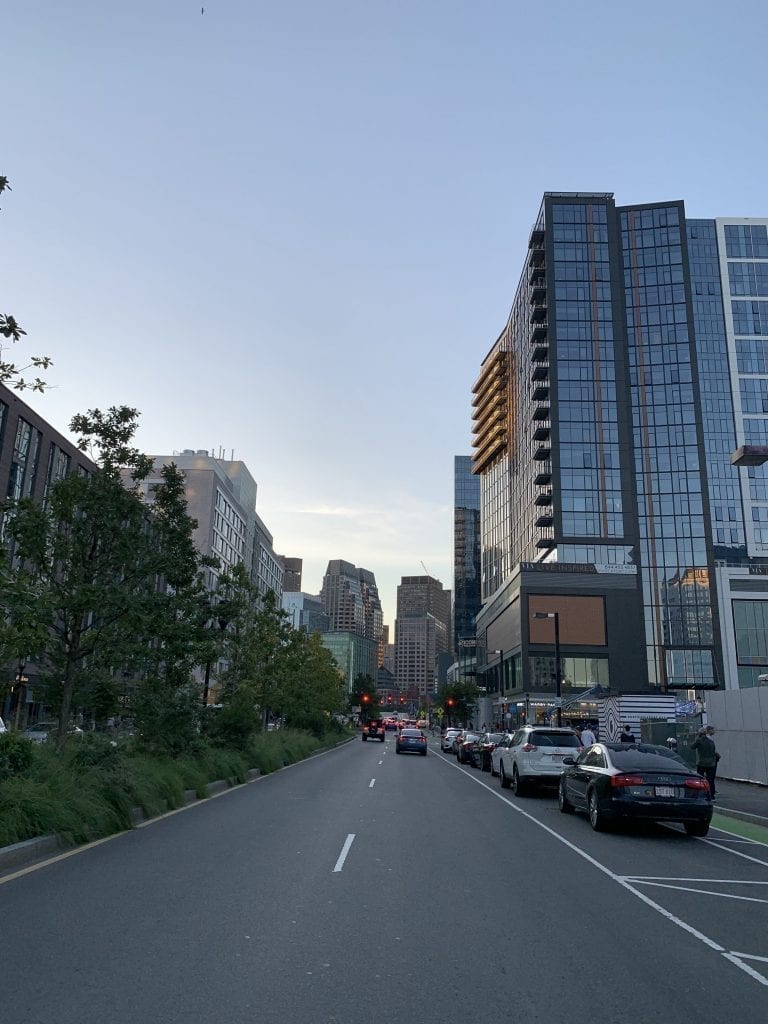 Main avenue of the Seaport District

Boston’s Seaport District Is Up And Coming, But How Are Companies Dealing With All The Traffic?

The Seaport District, the Boston of the 21st century (Credit: Alejandro Rosa)

BOSTON – Composed of modern, all-glass luxury buildings waterfront overlooking the skyline of the city of Boston, the vibrant Seaport District is now a trendy location. Boston startups Plastiq and SessionM are both based in the Seaport, and they proudly advertise their location. As posted on its website, “SessionM is lucky to be right on the water, conveniently located by public transport, restaurants, bars and shopping!” The companies know the neighborhood is an attractive location, but are aware it can be difficult for employees to make it to the office.

That’s why both companies offer alternatives to them, including flexible work schedules and remote work programs. Flexible work schedules allow employees to come in and leave at non-rush hour times, avoiding rush-hour traffic. The remote work program is even better, as it allows employees to work from home, or anywhere they want, as long as they have an internet connection.

“I’m a new mom, so I love the flexibility I have to work remotely anywhere I want to,” said Marie Cuddy, engineer at Plastiq.

The neighborhood has developed over the past nine years, bringing a unique appeal to the city. It has established a culture of its own filled with youthful energy, composed of innovators, entrepreneurs, and artists.

“It’s phenomenal, I love the overall growth of everything,” said Sebastian Jarvis, who works in the Seaport. “You just see new companies coming in and out, technology especially. I work in a software company development so it’s awesome, I love it here.”

The Seaport is home to high-end places, like the Equinox gym. Big companies like PwC also have offices in the area. With a WeWork location, the neighborhood is also buzz-worthy startups. 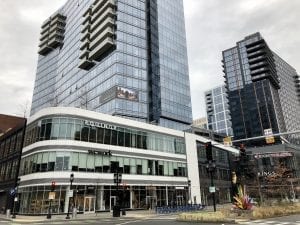 But, there’s a cost to all this progress.

Although the development is booming, it’s also creating an array of problems for the city.

It attracts people from all over the world, and with rents now as high as $3,270 for 552 square feet, these are the kinds of people who can afford to – and expect – to drive to work. The result? Fewer parking spaces, and the ones available are very expensive, some going $9.00 per hour.

And then there’s the traffic. According to a 2018 report by the research firm INRIX, Boston has the worst rush-hour traffic in the nation. The report says Boston drivers lost an average of 164 hours last year while stuck in traffic. While the area’s buildings continue to evolve into taller, glossy structures, its infrastructure and the layout of its roads remain the same. Massachusetts is an old state, more than 230 years old, and its roads were not built for todays’ volume of traffic.

Public transportation can’t come to the rescue here. When the city’s subway system was built in 1987, no one imagined the Seaport would develop into what it is today. The first subway system in America was built in Boston during the Industrial Revolution in Massachusetts. Back then, the Seaport was abandoned, largely just warehouses.

Today, the only public transportation to the area is the Silver Line bus. Karla Sanchez, who works at a startup company in the Seaport, said she cannot always rely on the bus because it’s usually too crowded. Hundreds of workers who commute to the Seaport every day know the struggle.

“I think it was a mistake to build everything so fast without working on transportation options at the same time,” Sanchez said. “We need more options. It is hard when everyone is trying to go home or go to work at the same time. At least they should build more protected bike lanes in the area for now.”

But now, the Seaport Transportation Management Association is proposing a bus service to get around the Seaport, but not to downtown. The Seaport Circulator would have seven stops within the Seaport, including one at South Station. The service would be free during an introductory period, but then it might have a fare of $1.00 or less, intended both for those who work in the area, and for the public in general. During rush hours, the service would run every 10 minutes. It is designed to supplement the MBTA’s Silver Line. 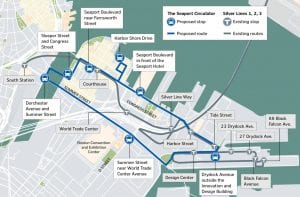 For travel beyond Boston, the neighborhood is a great location for companies, thanks to its proximity to South Station, which has bus and rail transportation to other cities like New York. But the bad traffic could scare companies away, if it’s too hard for their employees to commute to work every day. Companies are looking for alternatives to solve this problem, beyond the Silver Line.

The hectic Seaport traffic got a dose of relief thanks to efforts by Vertex Pharmaceuticals, which is also based in the Seaport. The drugmaker offers a free shuttle service to its employees. The service is provided by the Massachusetts Convention Center Authority, and also serves employees from Goodwin and PricewaterhouseCoopers.

Boston is a city filled with history. Most of its residential buildings are highly coveted, three-story, brick brownstones, the original and historic architecture from the time the city was founded. Today, new multi-million dollar developments in the city, like the Seaport District, are a total contrast to the original architecture of historic Boston. The Seaport District is the Boston of the 21stcentury.

But the neighborhood has not always been the thriving, vibrant community it is today. For many years, it was the opposite. From a muddy slab, to a thriving shipping area for fishermen. Then it became the location of 100-year-old abandoned warehouses. The Seaport used to be anything but luxurious. It’s ironic that today there’s a lack of parking spaces in the area, as Seaport visitor John Maher says, the neighborhood used to be a desolate wasteland of empty parking lots.

“I knew the Seaport when it was a parking lot and a fish pier,” said Maher. “It’s now one of the premier properties in the country.”

It was in 2010 when former mayor Thomas Menino launched an initiative to develop the area as the city emerged from the Great Recession. He initiated the redevelopment of the Seaport District by pushing to build the Boston Convention & Exhibition Center and the Institute of Contemporary Art in the area. Menino even proposed moving City Hall from its current location to the Seaport. He wanted the area to be a tech hub. The construction of new highways like I-93 and I-90 also helped with the development. These new roads connected downtown Boston with the district, making it more accessible. 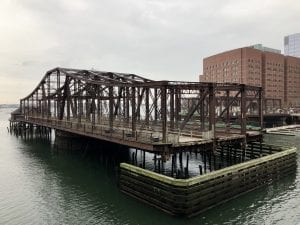 Structure of what used to be The Seaport District (Credit: Alejandro Rosa)

“Boston has changed an awful lot since I lived here in the ‘80s,” said Mark DeCew. “This is one area that’s changed. Now I’m learning this whole new story about what’s happened to this neighborhood.”

The Seaport is expected to continue growing, as construction cranes continue to rise on the neighborhood’s skyline. 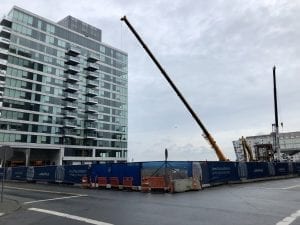 “It’s definitely a lot busier, I feel there’s so many more cars on the road,” said Maria Capola, who works in Rue La La, an e-commerce company based in the Seaport. “It has gotten more packed throughout the years and there’s so much construction going on. It’s a little crazy, but working in the Seaport is fun because there’s always something going on.” In the future, Seaport leaders will have to help her find her way out of the neighborhood.