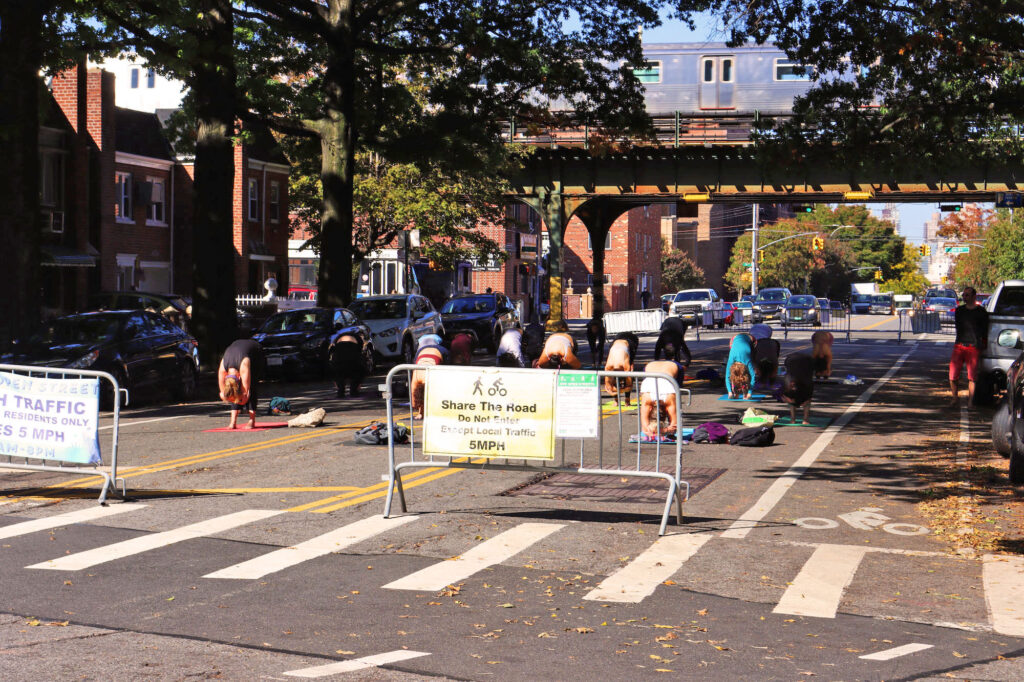 (NEW YORK) — A rattling subway overhead, a busy intersection one block away, and a “world famous” halal truck on the corner doesn’t exactly scream “Zen.” But on a recent Wednesday, the 11 a.m. class from Yoga Agora rolled out their mats on the pavement of 31st Avenue in Astoria, Queens.

The yoga studio, established in 2010, has been holding outdoor classes in the street and in Astoria Park every day since July. This allows them to offer a safe, in-person option in addition to the Zoom classes they’ve been hosting since the shutdown in March. Four blocks of 31st Avenue are closed to through traffic from 8 a.m.- 8 p.m. as part of NYC’s Open Streets program.

When asked if students have responded well to the outdoor classes, Nick Velkov, the morning’s teacher and the studio’s founder said, “Yeah, definitely. It gives people a chance to get their yoga practice in a group setting, which is sort of an irreplaceable experience.”

About 20 students greeted each other before class began, visibly happy to be engaging in a communal energy. Emily, who declined to give her last name, lives a few blocks away. She said, “I’m out of work right now, so this is kind of what I do every day. I take these classes a lot.”

Multi-colored mats provided cushion between bare feet and rough asphalt. Velkov used a portable microphone and speaker to amplify his cues of  “Inhale, exhale” over the New York soundscape. Bikers rode by. The environment was as untraditional as it gets for yoga, but the class dove right in.

Businesses and residents of the surrounding area have been mostly appreciative of the open space and respectful of the classes. On a few occasions, according to the neighborhood’s reddit page, drivers have scooted past the roadblocks to take a shortcut. But the 31st Ave Open Street Collective — made up of local members of the community — consistently checks that the barriers remain in place for safety.

Yoga Agora is typically housed in one large second-floor room above a sushi restaurant. The intimate studio has sleek wooden floors, lush plants, and two walls of floor-to-ceiling windows. It maintains a reputation for offering affordable drop-in classes for practitioners of all levels.

As chilly weather begins to creep in, Yoga Agora will have to adjust. “We’ll always have Zoom classes. And when it gets too cold, we’ll look for ways to safely have people come indoors, with windows open, masks on. We’ll follow state guidelines. I think our park classes will probably end this week, and we’ll start to move them into the studio. Then eventually we’ll have to phase out the street classes as well,” said Velkov.

When Emily was asked how she felt about the impending transition back to modified indoor space or Zoom, she said, “Sad. Worried.” Another opportunity for fresh air and human connection taken away. At least they had the sunshine this morning.