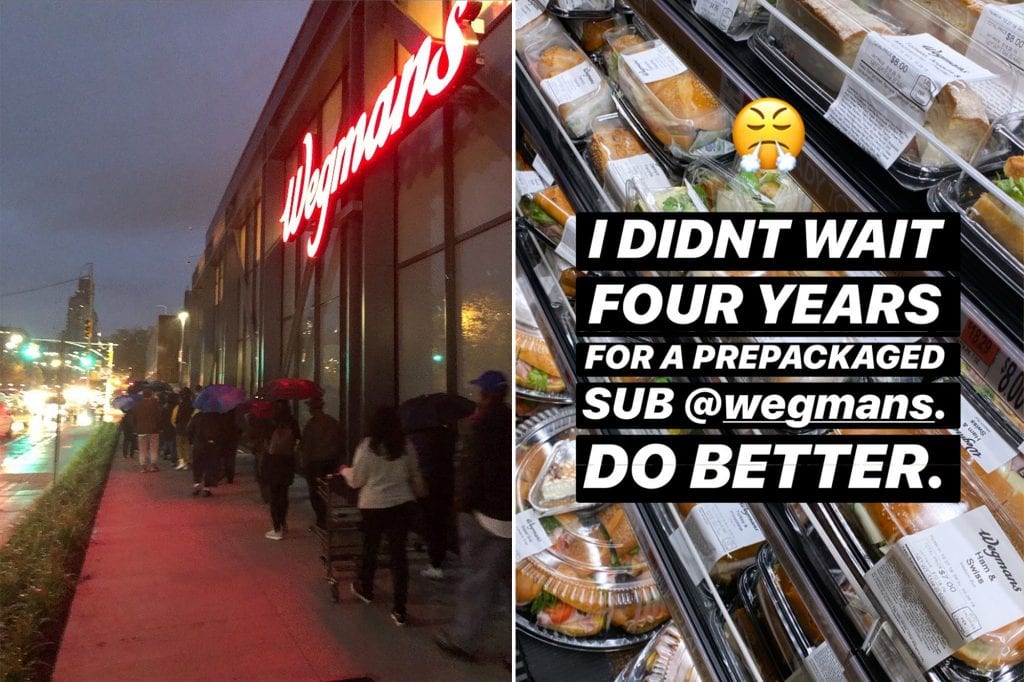 (Photos courtesy of Robby Leon and Alex Center.)
NEW YORK — For many eager shoppers, it was supposed to be a homecoming.

Before the sun rose on a rainy October 27, there were already hundreds of customers lined-up at 21 Flushing Avenue in Brooklyn’s Clinton Hill neighborhood. At 7 a.m. that morning, Wegmans, a staple supermarket chain borne in Upstate, N.Y., opened their broad sliding doors, four years after their excited announcement of an expansion into the city.

On the surface, Wegman’s appears to be a standard upscale supermarket and cafe, albeit supersized compared to a typical NYC grocer. New York media was all over the opening and the fanaticism surrounding the family owned grocery chain, which cannot be understated.

“I have a friend that told me he was getting there at 3 a.m. and he was bringing his cooler,” said Robby Leon, who arrived about ten minutes prior to the doors opening.

However, the fanfare gave way to bewilderment as Leon and quite possibly thousands of other so-called “Wegemaniacs” discovered that Wegmans signature offering — their freshly made sub sandwiches — were nowhere in sight.

“I built my whole afternoon around getting this sub,” said Mike Cain of Fort Greene, who actually cut a weekend trip to Michigan short to make it on opening day. He said the magic of their sub sandwiches mostly comes down to the bread, what he describes as a “mix of a challah and a hoagie.”

“It just doesn’t make any sense to me,” he said of the sub void.

“This is like McDonalds coming to Brooklyn for the first time and deciding not to sell Big Macs,” said Alex Center, a designer who lives in nearby Clinton Hill with his wife, Jackie. She’s also a huge fan of their fresh subs, and certainly not the prepacked versions they’re stocking now.

She sniffed, “These taste just close enough to remind you how far away they are.” 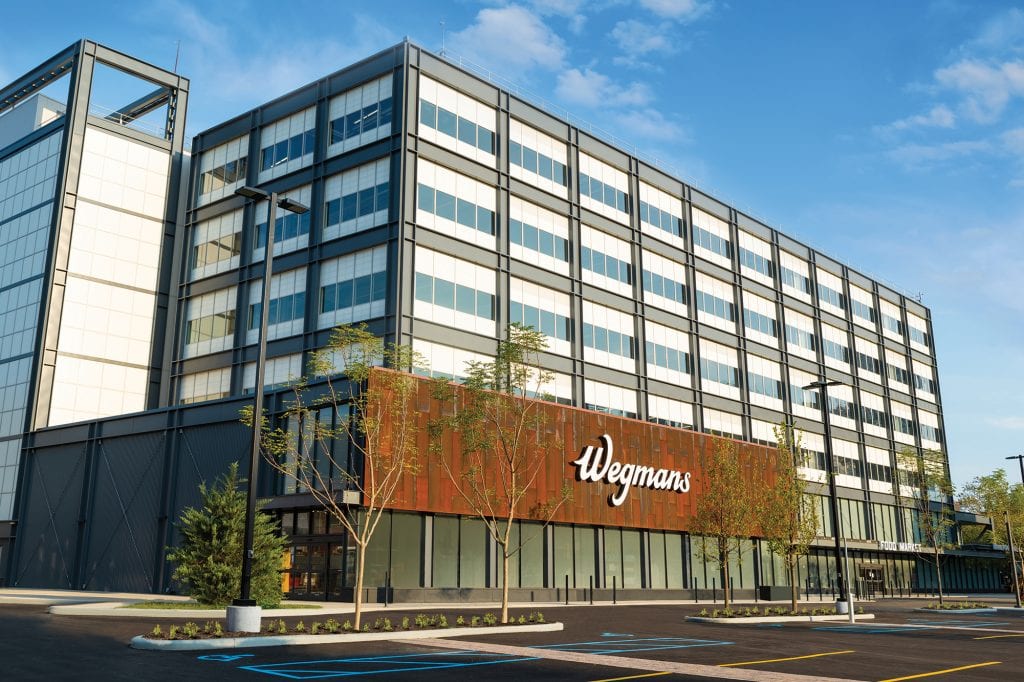 Copywriter and lifelong Wegmans shopper Michael Schiada was disappointed to find not only fresh sandwiches missing, but what he considers “the best black and white cookies in the entire universe.” With resignation, he said, “Obviously it’s just another grocery store. I shouldn’t take it so much to heart.”

On opening day, shoppers could be overheard at every corner grilling managers: “How could Wegmans have missed this?” Under a barrage of complaints, managers sheepishly talked of of urban markets and space constraints. Nor were Wegmans social media managers spared. Twitter followed rained on them tweets filled with cries of betrayal.

One devotee, Adam Donato, was so incensed that he joined Twitter just to promote his Change.org petition to have a sub shop installed at the Brooklyn store. It features a timeline of events, from when the project was first announced in May 2015 to now — and what he calls his “manifesto.” He compares the tragic event to “Les Miserables:”

“Do you hear the people sing? Singing the song of Wegmans subs,” the site reads, which is currently gaining signatures by the minute.

The Brooklyn Heights-based entrepreneur is passionate because, for him, Wegmans is where he spent his “glory days.” Said Donato, “We would do Sunday dinners at Wegmans,” referring to his wife whom he met in college upstate.

Customer service representatives, who are known to “bend over backwards” to assist customers, said Cain, immediately took stock of the feedback. When asked for an explanation, Kevin Cuff, the general manager of the newly minted Wegmans, who could only be reached via email, had this to say:

“We’re hearing a lot of great feedback from our new Brooklyn customers, and certainly a fair amount about not having a sub shop. When we open a new store, we know we are not going to get it 100% right on day one … [We] are actively looking into adding a sub shop.”

Wegmans may be kicking themselves, but the brand who, as one store manager put it, “always listen to their customers,” is taking the criticism in stride. They even signed Donato’s petition themselves.

In the meantime, Wegemaniacs are waiting, not so patiently, for their beloved subs, and many say they’ll avoid the store until they have them.

“Wegmans is very much my happy place,” said entertainment editor Tiffany Moustakas, who was willing to travel from The Bronx for those sandwiches. “I’ve never been sad at Wegmans before, which is a very new feeling for me.”