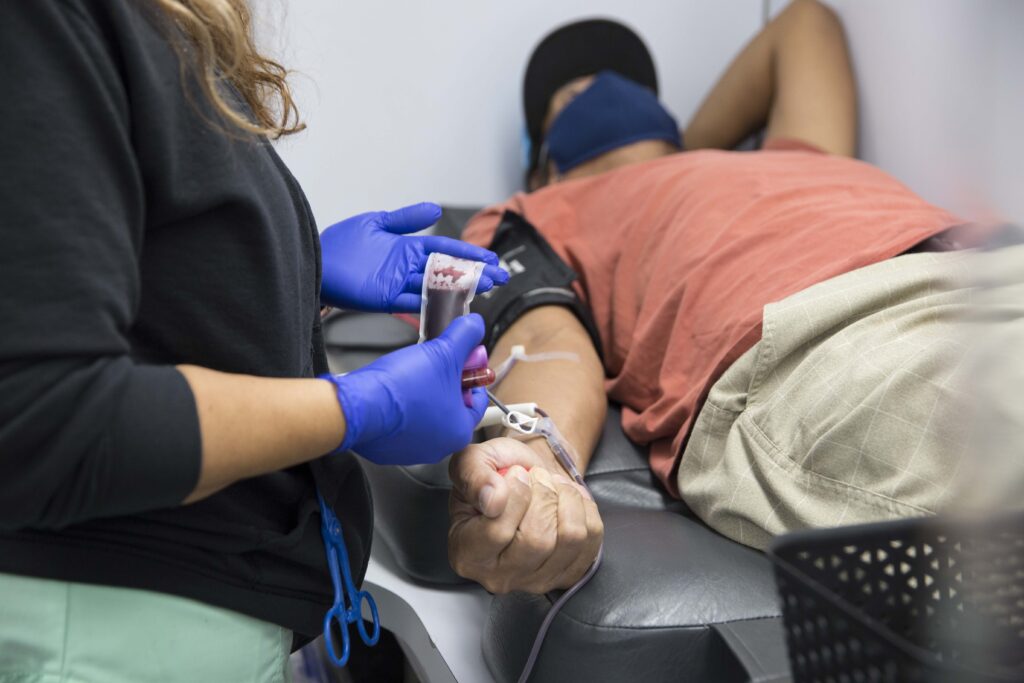 A donor participates in LifeStream’s mobile drive at the Orange Terrace Community Center & Park in Riverside. Each adult donates one pint of blood. [Credit: Sonya Singh]

At the start of the pandemic, people rallied to donate blood, according to Adam Botello, regional account manager for LifeStream, which supplies blood to more than 80 Southern California hospitals. Following the surge in spring donations, things tapered off as people avoided events and gatherings.

After a handful of donors in the morning, the van was quiet. LifeStream staff attributed this to coronavirus concerns, but also mid-afternoon temperatures creeping past 90 degrees and what Botello called “donor fatigue.”

Now, as counties reopen, more traffic accidents return, and hospitals resume postponed elective procedures, the need for blood has outpaced national reserves. LifeStream aims to have at least a five-day supply on hand. Currently, they have less than one day’s supply.

“Having less than a one-day supply is the equivalent of critical, critical crisis mode,” Botello said. “If something was to happen now, like — God forbid — an earthquake, some kind of natural disaster, a shooting, or something where a large quantity of blood is needed in a short amount of time, we don’t have it. We are not in a position to support that type of emergency right now.”

The shortage is exacerbated by the closure of high schools and universities, which supply 30–40% of their donations through campus blood drives. Compared to early March–October 2019, the number of young donors has dropped from 21,496 to 8,127.

“If you’d told any business, ‘Hey, you’re going to have 14,000 fewer customers over the next few months,’ how would you continue to survive?” Botello said. “It’s been really challenging.”

Instead of collecting more than 100 donations in one day at a school, LifeStream must now rely on open-to-public drives, like parking at a Starbucks or grocery store, where success depends on passersby running errands. It could take several outings to equal one visit to a school.

LifeStream holds regular events, with precautions like temperature checks and reduced capacity in their vans, across the Inland Empire. As a result of their relationship with Riverside’s Parks, Recreation, and Community Services Department, a LifeStream van is often parked at Orange Terrace — a new location since the onset of the pandemic. 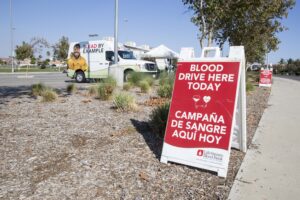 Once the heat subsided and families began to fill the park, the last few donors trickled into the van, bringing the tally to just 10 people. Other drives in 2019 would draw about 31 donations, Botello said. This year, it dropped to about 18. Orange Terrace, though, has averaged about 22.

“That has been my one shining light in this sea of darkness,” he said. “The Orange Terrace blood drive has been reliable, the donors there have been willing to come out, and a lot of them are O negative or O positive, and that’s what we desperately need right now, so we’re very fortunate to have that partnership.”

As she began to pack up for the day, collections supervisor Charlene Hunt said her nine years with LifeStream have shown her donors will rally again.

“People really realize now more than ever that it’s just not about them. For the whole world to be changed in a few months, people have to start thinking about other people and taking care of other people,” Hunt said. “And people always want to help. I was there for the San Bernardino shooting. I’ve seen the newspaper clippings from 9/11. When something tragic happens, like this, people feel a need to help any way they can.”

Still, a slow day can go a long way. Hunt explains to donors that the benefit isn’t simply one-to-one: One donation can save three adults or eight babies.

“That’s what I tell the high schools, when we did high schools,” Hunt said. “I tell them, ‘You guys are heroes, and nobody is helping you do this, not your mommy or daddy. You are genuine heroes.’”