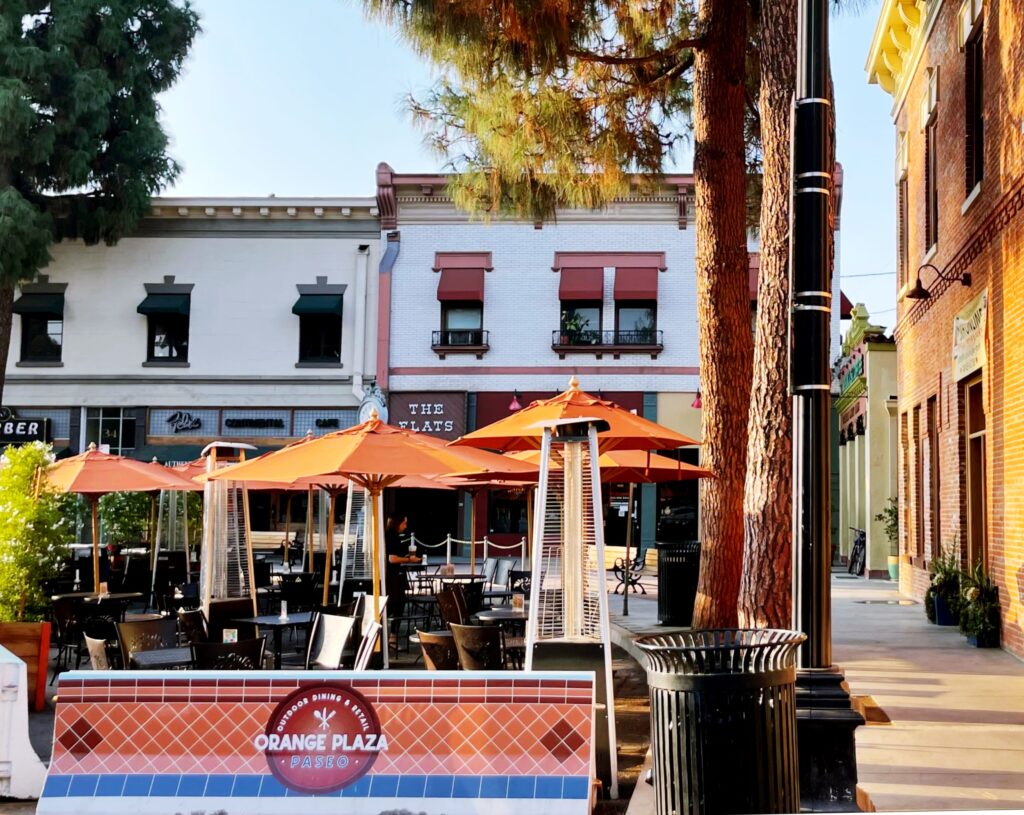 (ORANGE, Calif.) The future of the Orange Plaza Paseo, the two-block pedestrian-only section of Glassell Street in Old Town Orange, Calif., remains unknown as city officials outline a formal study to consider the pros and cons of making it a permanent feature.

After COVID 19 restrictions limited indoor gathering and dining, the city of Orange blocked vehicle traffic on two blocks of Glassell Street to create the Orange Plaza Paseo, designating a space that allowed local shops and restaurants to move services outdoors. The “Paseo” has been largely successful in helping businesses stay open and – in some cases – perform even better than before.

“It was too quiet without it,” says Donna Baker, an employee of Antique Station, a nostalgia shop in business at this location for 26 years. “Now we’ve been busier than ever,”

“It’s not just that the Paseo allows businesses to stay open,” said Mark Mittmann,  a member of the city’s Investment Advisory Council. “For many the outdoor space attracted new customers and actually allowed restaurants to increase capacity, which drove sales growth.”

Residents and shoppers generally welcomed the Paseo. Many came to enjoy the space where “kids can run free and we can enjoy a meal somewhere other than home,” said Keri Fitzsimmons, an Old Town resident, who also said dining there felt a little like being “in a European capital eating al fresco.”

Returning Chapman students (whose campus is just one block from the Paseo) are also grateful for the additional outdoor space the Paseo offers, according to Dr. Jerry Price, Chapman’s Dean of Students.

Not everyone is in favor of making the Paseo permanent, however. Fitzsimmons, mentions that some neighbors lament the increased noise and the traffic now rerouted down their streets. On community blog Respect Orange some citizens and business owners expressed concern that the city-funded Paseo gave unfair support to businesses along its corridor relative to those elsewhere, and encouraged city officials to conduct a full study on the Paseo’s impact.

The study is now underway with results expected by the end of 2021. According to the OC Register, the report will include a detailed cost analysis, a proposed streetscape design, and assessment on environmental impact. According to the city’s website, any businesses utilizing the Paseo going forward must apply for a permit and pay associated fees, which help offset some of the Paseo’s maintenance costs.

After a brief closure last month to host the annual Orange International Street Fair, the Paseo reopened September 24. Whether the Paseo will get a permanent home in Old Town remains to be seen.