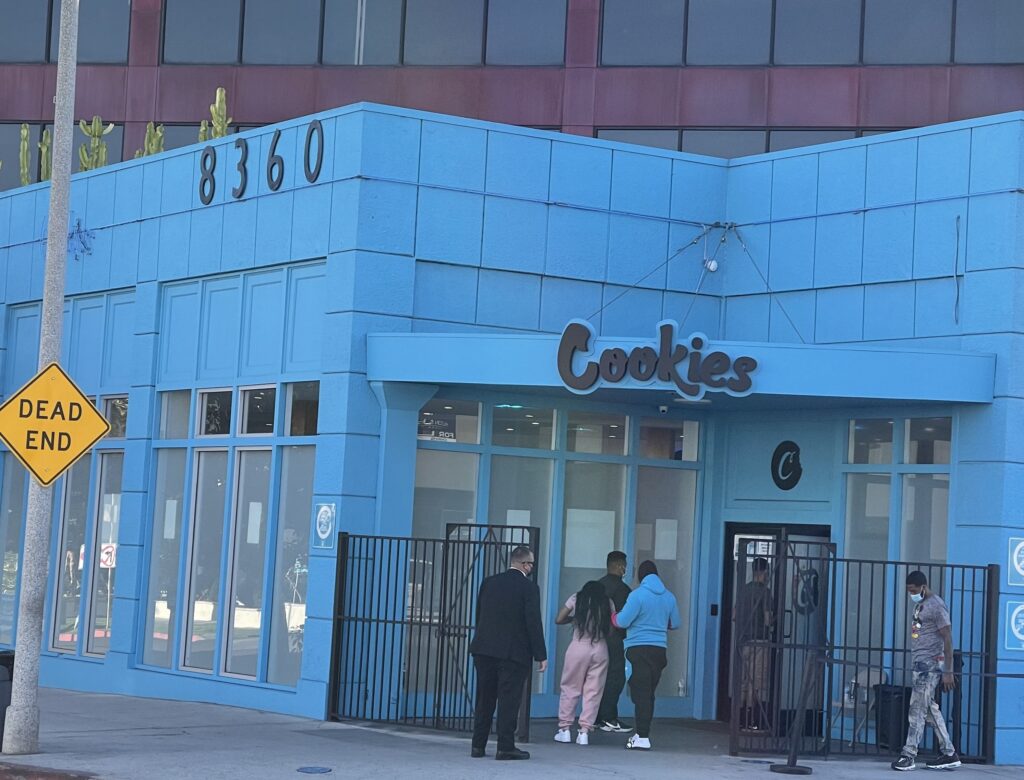 A Cookies storefront on in Los Angeles [Credit: Michael Levitt]

(SANTA BARBARA, California) — One of the biggest players in the cannabis industry has signaled interest in jumping on the psilocybin bandwagon, just as states and cities across the country review laws around the drug (which is commonly called “magic mushrooms”).

A representative for Cookies, a California-based weed retailer, made the comment in a February interview with Forbes.

“Of course, it comes down to legislation, but we launched with CBD, are expanding into THC, and hope to create a psilocybin product when the time comes,” the representative said. Cookies has not responded to The Click’s request for additional comment.

Founded in 2012, Cookies operates 23 US retail locations. It offers a mushroom-based product called Caps, though it does not contain psilocybin, a naturally occurring compound that produces the psychoactive effects for which magic mushrooms are known. However, the legislative movement to legalize hallucinogens could pave the way for the brand to one day include psilocybin.

Bill SB-519, which aims to decriminalize hallucinogens such as psilocybin, was introduced to California’s legislature this February. If passed, possession and consumption of these substances would cease to be a criminal offense, although selling hallucinogens would remain illegal. Despite the commercial prohibition, enthusiasts view the bill as an important step toward full legalization.

Psilocybin is federally illegal as a Schedule I controlled substance. It has only been decriminalized in Oregon and a handful of US cities, including Washington, DC. However, the mushroom movement has momentum, with legislation similar to SB-519 introduced in Florida and Connecticut earlier this year.

“The general consensus is that mushrooms are where cannabis was five years ago,” Eric Rochelle, an operations manager at cannabis company Gold Coast Distributions, told The Click. He believes that psilocybin will follow the path charted by cannabis, which is legal in 36 states for medicinal use and 16 states recreationally.

A 2020 market study projects that the psychedelic drug industry will be worth $6.85 billion by 2027. Nevertheless, few cannabis companies aside from Cookies have publicly shown intent to develop psilocybin products.

Rochelle thinks this could change if legislation continues advancing, explaining that psilocybin would likely be sold in the same places as cannabis if legalized.

“The same conversations that we had about weed need to be had about mushrooms,” he said. “If we get the guys in the suits on the hill to talk about it, then it could really go mainstream.”