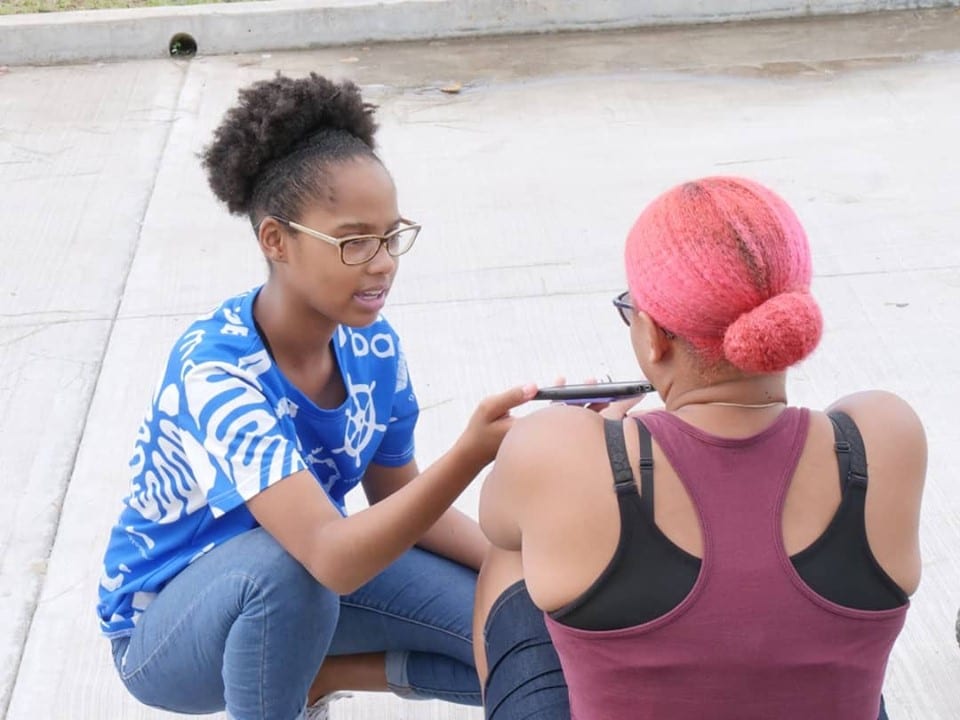 Case Study: A Heartbreaking Hurricane Story Heard Around the World

NASSAU, The Bahamas – Dorian was the strongest hurricane to ever hit The Bahamas, specifically the northern Bahamas, destroying the islands of Abaco and its cays and eastern Grand Bahama, with winds up to 185 mph, and claiming the lives of hundreds with its up to 20-foot surge. One of those who is presumed to have perished in the surge is Abaco resident Adrian Farrington’s 5-year-old son, Adrian Farrington Jr. Jasper Ward’s interview with Farrington for The Nassau Guardian received international attention. Her article, Father lost son, 5, in storm surge, was both the hallmark and heartache of the first year of her journalism career. Ward celebrated her first anniversary as a reporter, coincidentally, during her coverage of Hurricane Dorian, on September 10. She said she is grateful for how she has grown as a journalist and a person through the story, but wished the hurricane was not the event that got her there. It was her story of Farrington and his son that captured the hearts of all who remained abreast of Dorian’s aftermath.

Ward shared with The Click how she found the story and her experience reporting it.

Journalist’s Background
Ward is a 25-year-old news journalist at “The Nassau Guardian,” The Bahamas’ leading daily. She is small in stature but makes up for it in her passion for equal rights, feminism, anti-capitalism and speaking for the people. She graduated from Goldsmiths, the University of London, where she studied race, media, and social justice and since then has been covering news in The Bahamas including Hurricane Dorian which struck on September 1. Ward’s number one goal throughout her coverage ofthe storm was to simply tell the survivors’ stories, no matter how gruesome, sad or difficult, and that is just what she did with Farrington’s story.

Research and Discovery
Surprisingly, there was no research involved in preparing and writing this story. Ward just happened to be at the right place at the right time. She explained that while at a press conference at the National Emergency Management Agency (NEMA) headquarters, a man ran inside shouting and begging for help in finding his younger brother. Ward reached out to the man, whose little brother was Farrington Jr., and asked the man if Farrington Sr. would be willing to be interviewed, to which he agreed. Ward followed the man to Princess Margaret Hospital in the capital of Nassau, where she conducted a painful yet honest interview of a man who lost his son to the surge.

Ward added that she doesn’t think a lot of research is required for many of the hurricane stories, as her goal was to keep the stories as raw and authentic as possible. She explained, “As journalists, our goal wasn’t to write over-complicated stories about Dorian. Our goal was to tell the stories of the survivors. I didn’t want to weigh them down with paraphrasing or with background information. So, I just used a lot of quotes and tried to give justice to the testimonials of the survivors.”

While speaking to Farrington Sr., Ward was surprised at how calm and collected he was while telling the tale of losing his son, especially since it had only been two or three days after the storm ended. “At the time,” she said, “the government was not publicizing its death projections. To have a survivor describe watching a dozen people die, it was shocking and surreal.”

Aftermath
Farrington Sr. was the first victim that Ward spoke to who had witnessed deaths on the island of Abaco, thus, she is “still grappling to come to reality”, admitting that she has “vivid nightmares”. Nonetheless, one month later, Ward’s feelings toward Farrington Sr. and others are still the same, as she remains invested in making sure justice is given to each story. “[Dorian] is such a multifaceted story that I wanted to make sure that it’s not for some sensationalized purpose, that it’s something that is not tossed aside in the country as some old issue or old topic of conversation. Kind of just making sure that the severity of the storm is not forgotten any time soon.”