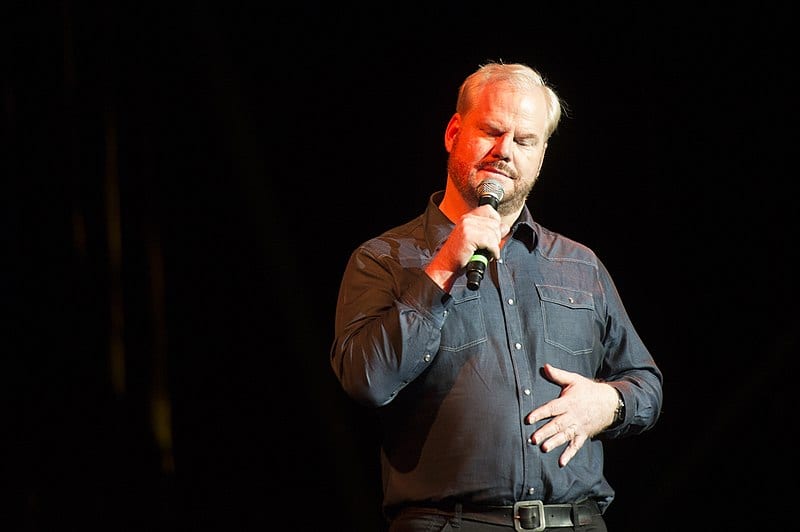 Case Study: A Reporter Goes to Ireland to Get Her Jim Gaffigan Story

Jim Gaffigan at one of his comedy shows on tour. Credit: Defense Imagery Management

Ariel Shapiro has got it all going for her.  At 29, she is an assistant editor at Forbes. Originally from New York, Shapiro graduated with her bachelor’s degree in history from The University of Wisconsin, Madison in 2012. After college she worked in local politics in NYC then landed a job at MSNBC and worked on shows like Hardball with Chris Matthews where she realized she wanted to do TV reporting. After working in PR at Brooklyn Methodist Hospital, she applied to the Business Journalism program at New York University where she graduated with her master’s degree.

With a love for fact checking, Shapiro decided that she wanted to focus more on media and entertainment and accepted an internship at Forbes where she worked closely with the editors and joined the Billionaire Team. After she completed her internship, she was hired full time as the assistant editor. After just seven months on the job, she has done a lot of writing and editing across different beats.

With dozens of articles published on Forbes, one of her most recent and colorful stories was about comedian Jim Gaffigan called “Raking in $30 million by Ditching Netflix and Betting on Himself.”

The story follows Gaffigan on his comedy tour showing how he he managed to increase ticket sales and land a comedy special with Netflix, the leading streaming service for comedians. The article goes deep into the world that is Gaffigan and how his raw talent in comedy has led him to where he is now.

The conception of the Idea/Pitch

Each year, Forbes produces a list of the highest-paid comedians.  Shapiro worked on the list and went through all of the celebrities’ earnings based on the categories that were assigned. Shapiro really liked comedy and enjoyed writing about it from the business angle. She was especially eager to interview Gaffigan after working on the list and noting that he made $30 Million putting him at number 3 on Forbes’ list of Highest-Earning Stand- Up Comedians of 2019.

“He was doing something interesting with streaming because everyone in comedy goes to Netflix because Netflix makes a lot of money,” Shapiro says. She found that Gaffigan was making a lot of money due to his touring, “putting butts in seats.”

Shapiro suspected Gaffigan had some bad blood with Netflix, but, she said, “he would never say that.” Her suspicion became the driving force of her story which then became her lede. It was at this point that Shapiro pitched her lede and idea to her editors, and then they had to get it approved by other editors. It became a long process of approval because Forbes does not typically like big name companies being paired with comedians in stories. The idea was pitched at the beginning of June. Following this, she went to Ireland to see one of Gaffigan’s shows at the end of July where the pitch still was not fully approved. “The pitching process took an unusually long amount of time which is usually the case at Forbes.” She says. “It was somewhat excruciating. I was working on it because I knew that I couldn’t waste time. This had to come out mid-August.”

So, Shapiro went to Ireland although her pitch had not yet been approved. She was already going to be in Europe so she made it work regardless. She traveled to a small town called Letterkenny, to see one of his shows. There, she sat alone in the crowd as she enjoyed the comedy show in what she says was a “dingy little local theater”.

Shapiro did not know how the interview was going to go until Gaffigan sat down to talk to her. But Gaffigan was very eager to talk and was incredibly exciting to interview. Their rapport was seamless and a pleasure.

“I only had an hour with him and he was a delight. He was a cool guy. I’m not a super fan so it made it easy to do the reporting.”

Before wrapping the story Shapiro tried to contact Amazon and Netflix seeing that they were the two big name companies that needed to be interviewed and added into the story, but they weren’t willing to talk. Shapiro was inquiring who was in charge of comedy at each company and then receive an email address for that person but she wasn’t hearing back from them.
“I needed to see all of the pieces in order to make it work. I had to physically go to his show and get the full experience while also doing my research and fact checking,” she says.

After returning from Ireland, and continuing to try to reach someone at Netflix and Amazon, she finished writing her story this although she still did not an approved pitch.  “I had already been writing it because I knew I just couldn’t waste time knowing that it needed to come out in August” she said.

You want to make sure that the subject doesn’t tell the story for you that you are the writer, she said. Shapiro did not want Gaffigan to tell his own story but rather she tell it for him with his help. During her writing she credits NYU journalism professor Adam Pennenberg who once told her, “you need to be painting scenes, it’s not enough to just be talking about things.”  With that in mind, Shapiro did not spend a lot of time quoting Gaffigan in her 1200-word piece. “I used the choice quotes, and it was my job as the journalist to explain it in the clearest way possible,” she said.

Although Gaffigan is a celebrity in the comedy world, staying objective was not hard for Shapiro. “There are pieces journalists write that are very swoony and I just didn’t have an interest in that because I wasn’t a huge fan of Gaffigan to begin with. I don’t think I should pursue stories that involve subjects that I am a fan of because you can’t view them objectively at all,” she said.

The story went through three editors including a fact checking process and a review of her interview transcripts. A deputy editor from her section took a preliminary look before sending it on to the section editor who had a heavy hand but she did not mind. “He will phrase things the way he wants to phrase them, but at the end of the day it’s still my story. It was mine.” And then of course it had to also go through copyediting.

After closely editing with her deputy editors and section editors the story was on its way to its launch date. “The rest was really a piece of cake,” Shapiro explains.  Her relationships with her editors made her story flow the way it needed to. The editors changed a lot of what she wrote. “I am one of those writers that needs an editor<‘ she said. “I don’t get upset about it, you know? Find what needs to be changed and make it better! What I liked, was the fundamental structure of the story didn’t change.”