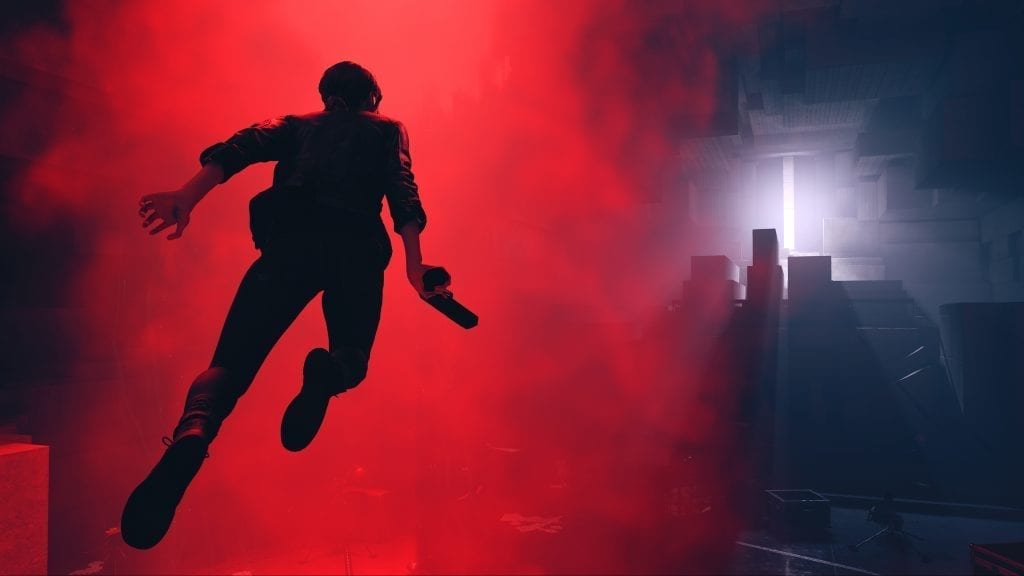 Control, released in August 2019, is the latest game by the creators of Max Payne and Alan Wake. Photo credit: screenshot by Remedy Entertainment.

If you want to read or write horror, it’s difficult to escape the influence of Stephen King or H.P. Lovecraft. Writers who want to thrill, chill, or thoroughly spook their audience are naturally inspired by masters of suspense whose books are enshrined at their local library.

But a new generation of paranormal producers look elsewhere for good storytelling: to the community-written “creepypastas” haunting the web. Creepypastas are a horror-themed variation of copypastas—a term which originated from the anonymous forum 4chan around 2006 and playful mashes together the words “copy” and “paste” to describe viral text online and how it spreads.

Creepypastas have existed for as long as viral media has, but they gained their widest popularity and notoriety in 2014, when a creepypasta fueled an attempted murder in Wisconsin. Despite the controversy, these digital ghost stories have become a significant enough aspect of internet culture that they’ve slithered into the heads of writers at multimillion dollar video game studios.

Gita Jackson, a staff writer at Kotaku, found that the new video game “Control” was eerily similar to a collection of creepypastas she had begun reading in high school. The new game by Remedy Entertainment, the Finnish studio which developed “Max Payne” and “Alan Wake,” shares similar themes with the long-running creepypasta site, SCP Foundation.

Jackson often investigates offbeat online communities. She knows how to make the internet feel like a living, breathing entity. While Jackson wasn’t the first to connect the dots between Control and SCP, she was curious to know whether this was an act of big-budget homage, or an inconsiderate rip-off.

This would be her next story.

“Most of my stories really do start out with, ‘Hey, remember that weird thing I used to do?’”Jackson told The Click. “And then I try to figure out if people are still doing that kind of thing. Why not shine a light on this otherwise little-known community that has ended up influencing culture at large?”

For her Sept. 20 article, “The Creepypasta Community That Influenced Control,” Jackson interviewed a leader in the creepypasta community as well as the director of the game. Her article is as much a comparison of two very different works as it is an exploration of how creative ideas disperse across the vast electric neighborhoods of the internet.

But the story began like any other: a pitch to her editors. When she was preparing to present her idea to Kotaku’s editor-in-chief Stephen Totilo, she knew she needed a good hook.

Taking to the SCP website to review their history, she spotted their staff page and used the site’s internal messaging system to contact the person in charge of community outreach. Still, there was a part of her that wondered, “What if the SCP people hate ‘Control’”? The story could veer in many different directions.

“All narrative relies on tension,” said Jackson. “How do the SCP Foundation people feel about this game that is making a profit on the things that they do?”

To her delight, she discovered they loved it. The head of licensing and community outreach for SCP, who goes by the name C. Pierce, was a big fan of “Control.” That was her angle: these writers had never met anyone from Remedy, but they were honored to have influenced such a high-profile work of fiction. Totilo gave her the go-ahead.

Jackson reconnected with Pierce, also known by his SCP username ProcyonLotor, for an interview. His thoughts on how “Control” complements and deviates from the SCP Foundation’s stories added a voice of authority to Jackson’s piece, and supported her own observations about the connective tissue between gaming and online fiction.

This was a story Jackson knew needed the voice of a developer in order to work. With her connections in the video game industry, she was able to reach Remedy through a mutual friend in its PR department.

“I managed to squeeze in, at the last minute, an 11 a.m. interview with the director of ‘Control’ and the leader of narrative design on that game,” said Jackson.

While the quotes she gathered from Pierce added legitimacy to her theory that SCP was an influence on Remedy’s game, confirmation from director Mikael Kasurinen turned her hunch into fact.
“I needed to quell any idea in the writing that, because these two things are similar, one is ripping off the other—which just isn’t the case,” said Jackson. “So, I needed to talk to the developers about their influences and how and why they chose to draw things from different kinds of sources. I needed to have that perspective or else it would feel like a very lopsided article.”

Now all the pieces were in place for her story to come together. Jackson sat down to type and like any working writer has experienced, she hit a wall.

Jackson’s editor, Natalie Diegraffinreid, helped unspool the story from her mind. Diegraffinreid highlighted passages and asked the writer to elaborate—even when they both knew the explanatory copy might not survive. As the piece achieved a more robust shape, they began shuffling paragraphs around to sharpen readability. Initially, Jackson had pushed her comparisons between the game and the creepypasta site to the end of the article. But Diegraffinreid moved them to the top, so that the piece could move swiftly to the central idea of homage.

“That ended up being the absolute correct framing,” said Jackson. “It addressed the thing that people would have been asking head-on.”

Although she’s a digital journalist, the Kotaku writer says she rarely reads the comments. But for this one, because she was personally interested in both the SCP site and Remedy’s game, she peeked below her post to see how readers were getting along.

Jackson was surprised to see commenters sharing their personal experiences with creepypastas and other fiction writing communities. It demonstrated how devoted fans and authors of these web-based literary circles—and the wider influence of their contributions—made for a great piece of journalism.

“A major video game from a major studio,” said Jackson, “being influenced by this tiny little community that started because of some weird creepypasta on 4chan—that’s ‘dog bites man.’”