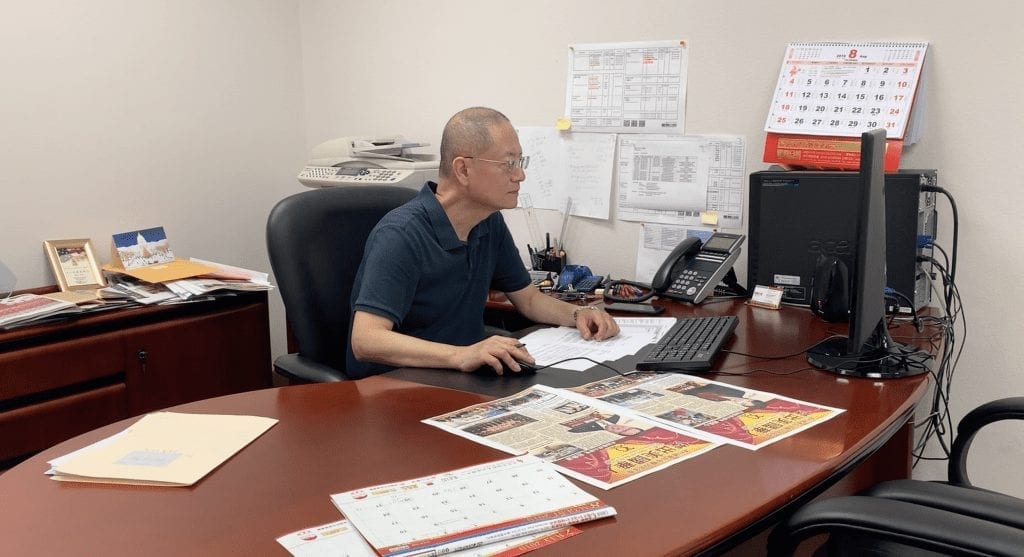 LOS ANGELES – Yee goes to extreme measures to cover his stories. For example, in pursuit of a lead, he has pretended to be homeless and followed police officers who were arresting customers of illegal prostitution. However, the piece I find most inspiring covers a dispute in Chinatown, San Francisco. It is that story that has won him a distinguished reporter award from the San Francisco Supervisor Board.

Having served as a Chinese-language newspaper reporter in California for more than 30 years, Philip Yee is currently the president of Sing Tao Daily. Formerly an investigative reporter at the World Journal Newspaper, he moved to Sing Tao Daily in Los Angeles 10 years ago to work as a deputy editor. He has won several local government awards for his work covering local and breaking news in the Chinese-American community.

When Yee was working at World Journal Newspaper in San Francisco in 1995, the controversy of Chinese restaurants and farmer’s markets abusing chickens and ducks caught his attention. According to Yee, restaurants and supermarkets were hanging BBQ chickens and ducks, which was seen as maltreatment by residents from other ethnic groups such as White in the U.S., even though it’s a common practice in China. Chinese people consider hanging chicken or ducks a method of keeping them fresh. However, by killing them at a farmers’ market in front of buyers, stores were accused of abuse. He began his pitch with the intent to investigate these claims of abuse.

Yee went to Chinatown almost every day to speak with restaurant owners and to listen to their appeals. “They told me that the white people living in that area just wanted to kick them out of the town. It’s part of Chinese culture that we have cuisine originally from Guang Dong province, just like Chinese style barbeque in which chicken or duck was usually hung on the hook to show its deliciousness visually,” he said.

As an investigative journalist, he conducted his research by including perspectives from all sides, including owners of farmer’s markets, sociologists, farmers from other ethnicities, counselors, and citizens from not only Asian communities but those who live all around the area. Without any electronic devices available at the time, Yee took handwritten notes which helped him develop a habit of needle-sharp observation.

When we spoke about the interview experience, Yee still remembered a number of details. He went to a local farm, observed how the chickens were being treated and noted that, unlike cage-free hens, the hens living in breeding farms for restaurants were confined to battery cages with limited space. “I talked to farmers, and they told me these farm-raised chickens have to be given hormone shot every certain time,” Yee said. “When I saw the battery cages, the condition was frail, and hens were not allowed to have enough living spaces. Unlike those cage-free hens breeding in Chinese farmer’s markets, they did not even have a chance to unfold their wings. My insight on this story is to define to what degree could be considered as a violation of humanitarianism.”

Although citizens outside of the Chinese community were able to file a complaint with the American Society for the Prevention of Cruelty to Animals (ASPCA), against Chinese restaurants, those within the community had no such channels to fight the complaint.

“Journalism is an occupation with strong power and impact for the society. However, we, a group of journalists, need to bear in mind the importance of balance and equity. We need to keep the story as fair, impartial as possible. However, the power of journalism is to help vulnerable groups deliver their voices to the public,” Yee said.

After interviewing restaurant owners and farmers, Yee couldn’t help but feel sympathy for them. They complained of discrimination, and felt that these accusations were tactics for pushing Chinese residents away from San Francisco. However, in writing the piece, Yee focused on data to maintain an unbiased stance, and also focused on interviews with other groups, such as local authorities, and non-Asian farmers and restaurant owners. He also refrained from using adjectives that could have led readers to particular bias.

Yee’s report significantly effect on the harassment of Chinese business owners when it was released. It moved the city council to put the issue to a vote and lead 100,000 people to protest in the street against the complaints from the ASPCA. As a result, the ASPCA withdrew the complaints.

“Our mission is to use the power of journalism to not only gathering information for the public but more importantly, it is to help those who lack voice with an objective perspective. However, when you write the story, you need to prepare in advance. For example, if you write a story about homeless, you need to reach out to the community, talk deeply with them and then you get to know what they really need, what the society really needs, what we, journalists, need to do to help them.” Yee said.