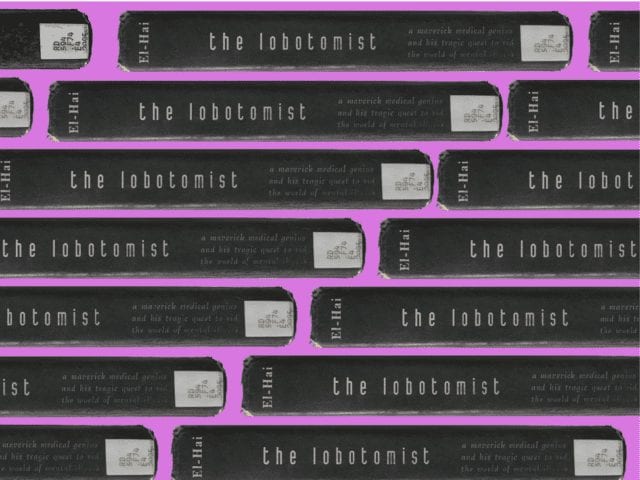 Case study: Jack El-Hai on Why He Wrote a Book on Lobotomies

NEW YORK – Jack El-Hai is a writer effortlessly capable of making the unfathomable seem inevitable. As former President of the American Society of Journalists and Authors he has worked to create systems that ensure the fair and ethical treatment of freelancers and staff writers across state lines. As an award-winning author of five books, he has spent his career chronicling those who pass outside of society’s correctives and the ignominy they achieve as a result.

In perhaps his best-known work, “The Lobotomist”, El-Hai elegantly traces the story of Walter Freeman, a surgeon who strove to subvert centuries of medical knowledge by popularizing lobotomies as a cure-all for mental illness. He recently spoke with The Click about the idea for the book and the magazine articles that preceded it.

El-Hai’s interest in lobotomies was sparked by a letter to the editor he read in the Star Tribune, his local paper. Although the purpose of the letter was to express support for a plan to label unmarked graves outside a local hospital, one detail of the story stood out: One of the interred had been lobotomized. This unrelated aside, a piece of background in an otherwise ordinary note, proved the catalyst for everything that was to come.

Motivated by curiosity rather than the pursuit of a topic for a book, El-Hai used the yellow pages to track down the note’s author, calling her to ask for an in-person interview. He asked her for dates, medical histories, and family histories, all to find out more about the lobotomized patient and their circumstance.

“I always focus on character, it’s what I’m really interested in,” said El-Hai. After finding out all he could about his character, he felt he had enough information for an article on the history of lobotomies in the state.

Turned down for being too esoteric by his target publication, the lifestyle magazine Minnesota Monthly, El-Hai persisted and the article was finally commissioned by a local scientific journal, Minnesota Medicine, allowing his research to begin in full.

The research consisted of interviews with patients and surgeons in the state about their experience with lobotomies as well as the effect those surgeries had on their lives and that of their patients, El-Hai said. In hammering down those details El-Hai found the character who would develop his story further.

It was Walter Freeman, a surgeon whom a number of interviewees remembered giving spirited lectures on the topic of lobotomies. A prolific doctor famous in the early 1900s, Freeman opened up new directions for El-Hai’s research.

He was able to speak with Freeman’s sons, interviewing them for their memories of their father. He discovered personal scrapbooks that one of the sons had kept, detailing the surgeon’s inner-most thoughts. He discovered a trove of boxes, 80 in all, that comprised Freeman’s life output. With so much to read, El-Hai even used text-recognition software to scan the documents, creating a searchable database of Freeman’s work.

The result was too much information for the article in Minnesota Medicine. Now El-Hai had a new article to pitch, one centered around Freeman. Again magazines were quick to call the material esoteric and the article was rejected a number of times before El-Hai came to the idea of marketing the piece, again, based on locality. The Washington Post, local to Washington D.C., Freeman’s home city, was interested and the article “The Lobotomist,” was finally published.

A Novel Idea
Of course, that isn’t the end of El-Hai’s connection to  the story, and after the success of the article, and with vast swathes of material still unused, El-Hai contacted a literary agent who found a publisher for the 2005 book,”The Lobotomist.”

As a parting note, El-Hai had a further suggestion for those looking to spark the kind of curiosity that led him to “The Lobotomist.”

“Every two years I go over the things I’ve written to find what I liked best. Whatever connects them; I try and write more of that,” he said.