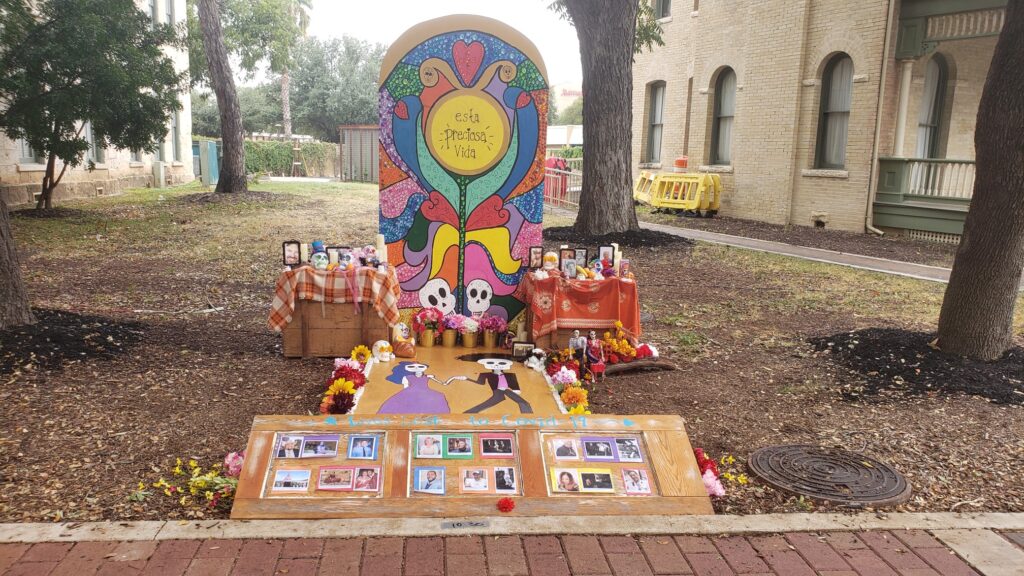 (SAN ANTONIO, Texas)— In years past, the annual Dia Los Muertos event has drawn massive crowds to San Antonio’s downtown HemisFair park. Because of COVID-19, the thousands that would normally attend this year’s event will have to make do with watching the celebration on local San Antonio TV stations on Oct. 31 and Nov. 1.

Adjacent to the park, there is a half-mile road where “ofrendas,” an altar with offerings that honor the dead, were placed at different intervals on both sides. Director Faith Radel and artistic director Jimmy Mendiola were in the process of interviewing and filming families with their “ofrendas” for the Annual Dia Los Muertos event on the morning of Oct. 17. In order to keep numbers low, the director’s used “ofrendas” submitted years prior. Three displays were for families, and the two others were from an animal shelter, and for Ruth Bader Ginsburg.

HemisFair Park is known for being the 1968 World’s Fair site, celebrating different cultures coming together in the Americas and as well as the city’s cultural diversity. It is located downtown and broken up into three different parks, Yanaguana Garden, Civic park, and Tower Park. It is the site for many cultural events throughout the year.

Yanaguana Garden, where the celebration for Dia Los Muertos has been held for the past two years, has been open since 2015. It is a family-friendly environment that offers bike paths and wheelchair accessibility, and it is on the city bus route. There is a large playground for kids with different sculptures throughout Yanaguana Garden. Also in the park there are community restaurants such as a pizza shop, an ice cream shop, and a candy store. The coffee and bakery shop was celebrating its reopening with outside vendors.

Mendiola stated that the celebration was in its eighth year and started at La Villita, an artisan village only a square block in the heart of downtown San Antonio. After teaming up with the city, “the event will be a combination of the altars, musical performances, and the reciting of poetry, and then what is day of the dead,”  Radel said.

Dia Los Muertos is the celebration of the dead. “It comes from this idea, that this is the time of the year where our ancestors are able to visit the living and be in the world of the living. You welcome them back with an altar, have their pictures up and lay marigolds for them to follow back,” Radel said as she pointed to marigolds on the ground. “It’s not just grief and mourning. It’s a time to celebrate their lives and remember them.”

The main attraction is the community altar that has been a part of the celebration since the beginning. “People submit photos of their loved ones and we paste them onto the altar and then we have somebody come in and assemble the offers.” This will happen on Oct 19. “It’s the only place you can dance, have a good time, and at some point cry.”