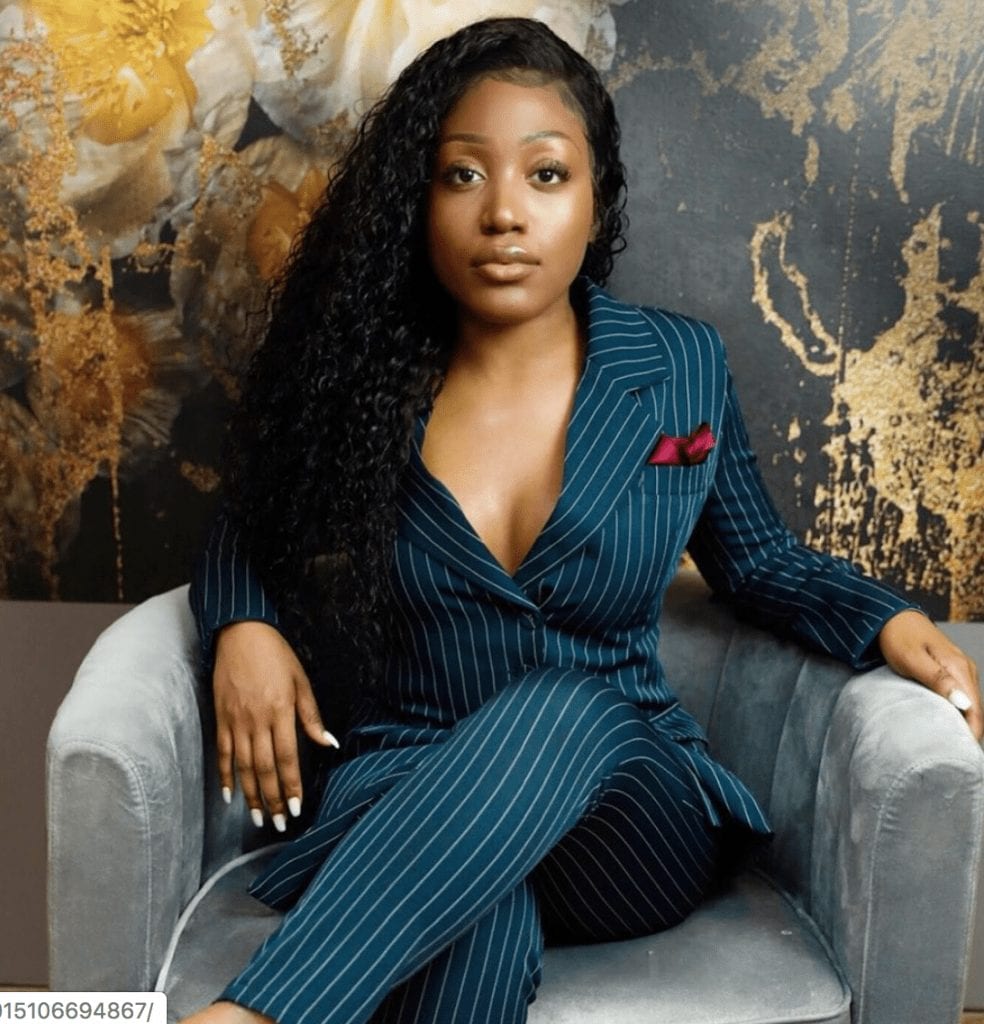 Minneapolis, MN  – I was first introduced to Chelsea Miller by Gen Z Girl Gang founder and famed activist influencer, Deja Foxx. It was June and the both of us were asked to participate in a photo shoot in celebration of young women who have successfully navigated both academic and professional spaces with unapologetic, uncompromising panache. She was a model. I was the stylist. And the outfit I ultimately dressed her in – a white tweed skirt suit and a yellow silk vintage Yves Saint Laurent scarf worn as a shirt – was mine yet it appeared as though it belonged on her.

We chatted between her conference calls as she briskly applied her own makeup with the kind of precision that implied she could achieve the perfect liquid line in the backseat of a cab during rush hour. Her burgeoning clothing company, Petronella Luxe, was accepting applications for interns, she told me as she tapped away at her phone and revealed a few of her designs. Ironically enough, they weren’t at all unlike the outfit I’d given her: boucle mini dresses with gold buttons, plaid suits and monochrome skirt-sets clearly meant for the woman didn’t need anyone to pick up the bill but graciously accepted it anyway then went back to the office. I wanted every piece.

But Miller doesn’t just design for the woman many would probably call their girl crush. She is also the CEO and Founder of WE Believe, a nonprofit organization and leadership pipeline for women and girls of color. Partnered with educational institutions and companies across the U.S., WE Believe provides the arm both working women and aspiring change-makers – some as young as middle school – with resources that historically, have been deliberately kept from their reach.

Fortunately for me, Miller and I have remained in touch and she recently agreed to chat with me about the trials and triumphs of both Petronella Luxe and WE Believe and where they’re headed.

AH: Thank you so much for joining me! Though we spoke a little bit about where both Petronella Luxe and WE Believe were headed months ago, we hardly discussed their respective conceptions. Can we unpack those motivations?

CM: WE Believe really started in college. A lot was going on around Say Her Name and The Black Lives Matter movement and just being from Brooklyn, New York and coming from an under-resourced community as a young Black woman and daughter of immigrants, I saw the ways in which women of color – just girls – in particular, were especially disadvantaged and how their voices oftentimes were left of the conversation, especially when we look at movement building but really just across the board.

This is obviously not new for our generation, it’s something that’s been compounded over time. We’re now living in the digital age which offers more resources and more and more Black women are becoming college-educated so I – a first-generation Jamaican woman – along with my co-founder who is also a Black woman born in Ghana, came together while at Columbia University and created a curriculum for young Black girls. We soon realized that we can’t do this work ourselves, so we launched our chapters and that’s how we were able to expand across eight states and 20 plus universities.

With Petronella Luxe, I was just getting increasingly frustrated with the way young, Black women were being represented in the fashion industry and in particular, the media. What does it look like to have a clothing  brand that doesn’t just display us as a party? You know going out is definitely a part of it but there’s more to it. I have a lot of sisters getting job interviews who don’t even know what to wear. I attribute my own ability to know how to dress to being a part of organizations and those are the things that you take for granted, the spaces that you occupy. I’ve realized that it’s a privilege to know how to navigate this world and brand yourself in a way that other people can respect and identify with but also to  have control of your narrative. In creating Petronella Luxe, I knew I didn’t just want to sell clothes. So we’re actually gearing up to launch our brand ambassador program which includes online training sessions on building your own brand, stepping up your networking game and preparing for job interviews. A lot of fun things that are going to come out of this demographic I love: women of color between the ages of 18 to 24 and 26 to 34.

AH: I have to say, that’s what really struck me about Petronella Luxe, in particular. Clothes are just one aspect of the brand but it’s really about representing the duality of women who are succeeding both professionally and personally. What was the most difficult part of getting WE Believe or Petronella Luxe started. I know you mentioned earlier that launching a non-profit is so much more difficult than people realize. Let’s unpack that a little bit.

CM: Yeah, I think the hardest part is that we live in a capitalist society where everything is ruled by money. So when you think about creating something that’s very purpose- driven, it’s less likely to get monetized. With Petronella Luxe, I’m selling a product, right? The clothing you receive once it’s purchased is tangible. Now when you think about a nonprofit, there is this belief that nonprofits won’t generate revenue so you really have to be savvy on where you’ll get your revenue from. You have to re-evaluate traditional models because a lot of nonprofits have relationships with foundations that dish out millions of dollars that small organizations just won’t get. You need to think about what fundraising strategy will work when you have an organization that’s essentially for women of color because there’s not a lot of funds and resources in or for that space to begin with. Historically that’s the way it’s been, but the point is that women of color have been building. Then the problem becomes how to prove to people that things like mentorship is critical to unlocking the leadership skills of girls of color. What we’ve found, in terms of funding, is to really bring it back to the community and to schools. Right. Educators and people on the ground see the need for this work and want us to drive it forward. If we tried to do it from the top down, it’s not going to be effective. It has to be a grassroots organization that builds up.

AH: I’m glad you brought up this notion of convincing folx to get on board and support this work. In class, we’ve been discussing the importance of the pitch and the ways in which you can engage with the right people to move your mission forward. Do you have an anecdote from your own experience in which it was difficult to achieve this? Or in turn, quite easy?

CM: I’d say people generally support the mission – especially with WE Believe. We do get pushback that other people have already done what we’re doing which is helping young girls. For instance, the Girl Scouts. But there really isn’t a national leadership pipeline specific to women and girls of color and the simple answer is that culturally relevant curriculum and having people in the classroom that look like you is so significant as it allows young girls to see themselves and understand what they can accomplish. You can’t be what you can see. There’s a reason why every woman on the campuses we work with decided to carry this torch and take on this work. When you go to school districts and you see how underfunded they are, you understand the need. For instance, we held a pilot program in Harlem and after six weeks of being present in the school, we had a class on relationships and self-esteem. About 30 minutes into the class with girls ages 10 to 14, a third of them had come forward and shared that they were victims of sexual violence or abuse. This was the first time that they were sharing this in a school setting or safe space, in general. The work that we do isn’t just developing the next generation of leaders. It’s also about really unmasking trauma and helping in that recovery process. The best way that we as mentors and sisters in partnership is to introduce these types of conversations to the institutions we work with.

AH: Right. Wow. Those interactions are really remarkable, maybe even unprecedented. Especially in a school setting. That’s incredible. Pivoting from that, how do you think social media has played a role in your brand building?

CM: I have a love/hate relationship with social media as I’m sure many people do. To me, it’s about strategy. It’s a marketing tool. When launching WE Believe, it was critical in getting chapters started on other campuses. It’s just really cool to see the content you create can really create real life action.

AH: Absolutely. Finally, what’s next for Petronella Luxe and WE Believe?

CM: Well, we’re celebrating our one year anniversary of Petronella Luxe in March and there’s a lot of exciting campaigns we’ll be launching in its second year. With WE Believe, we’re focusing on new partnerships with the Department of Education and organizations to make sure that we continue to strengthen our model and our curriculum and just impact as many people as possible!