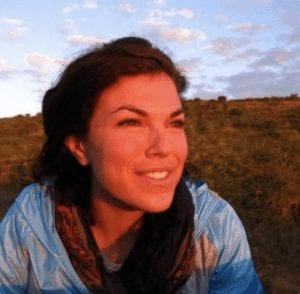 In spite of Christina MacGillivrey’s deep Midwestern roots, she knew she wanted to travel the world from an early age.

“I wanted to do something far away,” she said.

The 34-year-old documentary producer and director from White Bear Lake, Minn. said she has an “idyllic, almost cinematic” childhood in a John-Hughes-movie-sort-of-way — in a town which gathered in the high school football stadium on Friday nights.

MacGillivray remembers it all fondly, but the cliché wasn’t for her. She enrolled at Macalester College, a liberal arts school in Minnesota’s cultural hub of St. Paul, where she realized her motivation to learn about “cultures that are different from my own.”
Out of school, she was hired at a foreign-policy think tank, in a role she refers to as her “gateway to exploring the world.” There, she spent time in Kazakhstan, India, China, East Africa, and Europe. “That was my lucky break,” she said.

Today, she’s working on a series of short documentaries for the United Nations, with a shooting schedule starting in India and moving on to Thailand, Australian, and Japan.

“I’m starting to try to do more independent work,” she said.

“I really want to think about [how to] start doing commissions for media channels,” MacGillivray added.

Despite her Midwestern upbringing, she says her hometown has also been a source of inspiration when learning about new cultures. “I think I view Minnesota through a pair of rose-tinted glasses,” MacGillivray said, adding that wholesome and “remote” community just below the Canadian border is still very “culturally distinct.”

“That’s something I find increasingly difficult to find in the U.S.,” says MacGillivray, “so I think I strongly identify with that peculiarity.”