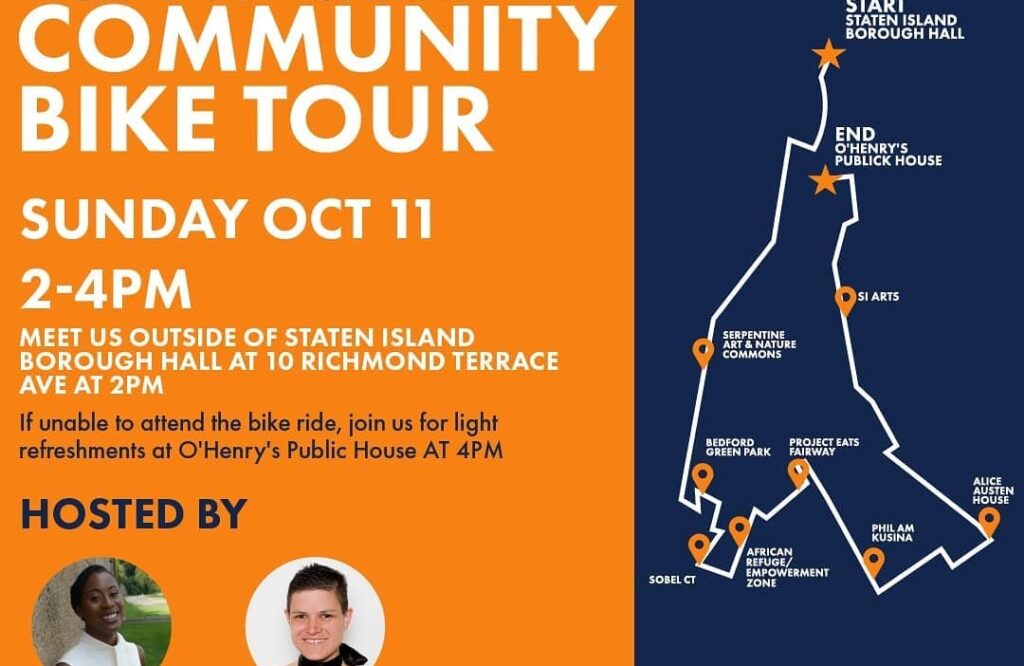 [Image used with permission from Amoy Barnes for City Council]

(STATEN ISLAND, N.Y.) — On Oct. 11, Amoy Barnes, a candidate for Staten Island city council, hosted a bike tour during which locals had the opportunity to ride alongside her while discussing community issues ranging from transportation to racial inequality.

Barnes teamed up with Rose Uscianowski, a transportation advocate, to organize the Community Bike Tour to promote health and wellness and highlight the beauty of Staten Island. The event also brought awareness to the lack of bike lanes and transportation options in the borough.

Hidden among the North Shore’s long underrepresented streets is an oasis, participants learned. “During the community bike tour, I learned about the community farms on Staten Island that are in development,” said Pryde Smith, 25.

“After attending the community bike tour event, I learned that Staten Island has a lot to offer when it comes to nature, along with this borough having a lot of underestimated potential,” said Isiah Williams, 19.

At least a dozen cyclists met at Borough Hall on Richmond Terrace Avenue at 2 p.m. The free, two-hour event took them through Rosebank, Clifton, and Park Hill.

During the tour, Barnes told cyclists about the power of community solidarity, as well as the importance of open communication and local support. Discussions included everything from the Black Lives Matter Movement to the role of urban farms.

“It allowed me to learn more about Amoy Barnes and what she plans to do on Staten Island,” said Smith. “I was able to see her in a different arena, which was a good thing because I would want a different person in office who knows what is needed in the community.”

Debi Rose is the current councilwoman in office. Six other candidates have filed for the New York City’s Campaign Finance Board, which will allow them to run against Barnes, who was born in Jamaica and raised on Staten Island. She serves as the borough’s director of the Transition and College Access Center.