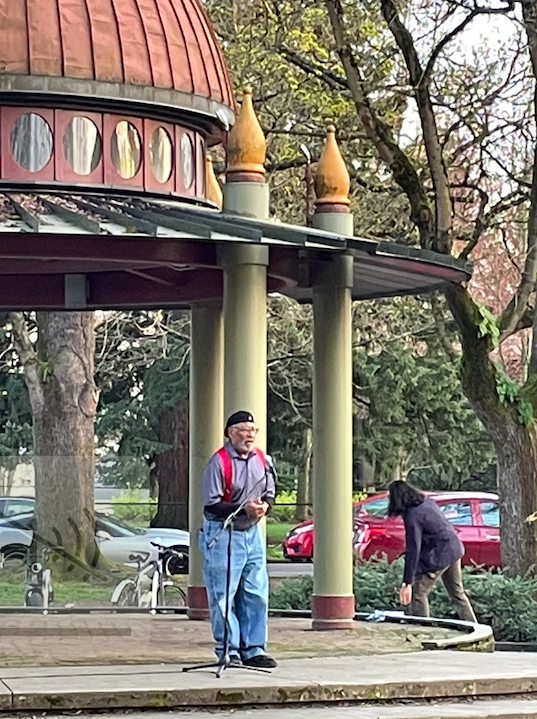 North Portland’s Eliot neighborhood was host to Kent Ford on March 31st, co-founder of the Portland Black Panther Party. Ford leads walking tours of civil rights landmarks a few times each year, and on Wednesday evening he spoke to a crowd of more than a hundred Portlanders in Dawson Park.

The event was hosted by the recently founded People’s History of PDX, self-described on Twitter as a “radical education project that aims to bridge the gap between the struggles of the past and the struggles of today in the Pacific Northwest.”

In the late ‘60s and ‘70s, the neighborhood was filled with community-sourced services targeted at Black Portlanders, according to Ford who described how the community came together around the Black Panthers and their services. “They had our backs, and we had theirs.”

The Black Panthers were an organization founded to end police brutality against Black people, uplift Black communities, and speak up against racism.

Complete with a microphone and speaker system, Ford took the crowd on a two-block tour down North Williams Avenue, and explained the historical and socio-political significance of the Albina and Eliot neighborhoods.

Ford led the crowd to the site of the Children’s Breakfast Program, which he and the Portland Panthers opened in 1969 at Highland United Church of Christ. The program served 125 children free breakfast each day. That same year, the Panthers opened the Fred Hampton Memorial People’s Health Clinic in the same neighborhood. Ford drew attention to the advanced Sickle Cell Anemia testing the clinic provided. By early 1970, the Panthers had opened a dental clinic at the intersection of North Russell and North Williams Avenue.

While taking questions from the crowd, Ford said how “fired up” he got discussing Portland’s activist history, and that he could “go on all night.” He told the crowd how hard the Panthers worked, that much of their time was spent educating themselves, reading radical texts at least two hours each day. For today’s activists, he recommended authors Angela Davis, James Baldwin, and Ta-Nehisi Coates.

Ford actively participated in the racial justice protests last summer and remains radical. He has little faith in political systems to create radical change, and urged the crowd to, “Keep it in the streets.”

Ford’s upcoming and ongoing “Power to the People: Black Panther Party Legacy Tour of Albina” is listed on Vanport Mosaic’s site. The Nation interviewed Ford last June to gather his insight on the state of protest in Portland.