Colin Cunliffe Takes His Art to the Woods

(NEW YORK) — It’s the day after the election and Broadway actor Colin Cunliffe, in his olive green baseball cap, sits on the floor of his room—the one room in the house that his partner Joe lets him fill with his “little weird things”: top hats, old dance trophies, stacks of miscellaneous papers. This room is in a house, and this house is in the woods. It’s a far cry from Colin’s typical Manhattan setting, except for his colorful troll dolls on the shelf nearby.

Colin gives his cat Rambo a tickle and walks outside onto the wooden deck, flipping our FaceTime around to show me a yard scattered with fallen leaves, and beyond that, blue skies, and endless woods. This is certainly no cramped, one-bedroom apartment. Pause for a deep breath of clean mountain air.

Last spring, Colin and Joe were headed out of the city for a friend’s birthday when they heard the news of Broadway shutting down due to the coronavirus. It was an undeniable sign of strange times to come, so they decided to turn around and get prepared. “Let’s get the cat; let’s get some more clothes.” Eight months later, they haven’t really been back. They’ve traded their Chelsea apartment for a house in upstate New York and embraced a seismic shift into a new pace of life.

Now, after an unexpected intermission, the set of Colin’s life-show has clearly changed, but Act Two is in full swing. Glittery marquees have given way to nature. 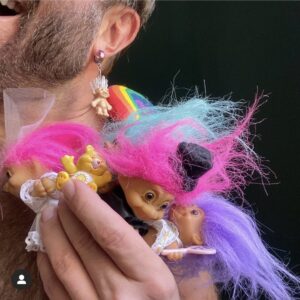 Colin lived in New York City for 21 years and is a veteran Broadway performer. He was in “Cats,” “Finding Neverland,” and “Pippin,” just to name a few. Recently, he was working on new musicals and producing his own cabaret series, “Colin Cunliffe Presents.” While the rest of us in the cutthroat theater industry sometimes fall short of good sportsmanship, Colin somehow always remained a colorful ray of warm positivity.

Fellow performer Matthew Tiberi worked with Colin in “Finding Neverland,” and as a swing —someone who understudies multiple ensemble roles— he was responsible for covering Colin’s track. Actors aren’t required to educate their understudies, but Matt remembers Colin always taking extra time to help him with the trickier parts, like roller-skating in a giant bear costume. “He was as wise as he was friendly and selfless.”

Colin knows his city neighborhood served him well for a time, but like an ex, it’s just not right for him in this moment. He explains, “There’s much love, but we’re just not meant to be together right now. We haven’t divorced, we’re just separated.”

Even though he’s been transported to a new dimension (See: not the city), like they always say: While you can take the kid out of the theater, you can’t take the theater out of the kid.

Over the past few months, Colin has teamed up with fellow Broadway vet/upstate NY resident/best friend Ronnie Todorowski to create and produce live performances in their rural community. In August, they put together an outdoor dance festival called “The Fête” on the grounds of the Forestburgh Playhouse, enlisting top talent from their NYC theater bubble. And just last week, they created an immersive Halloween show in a creepy old hotel on the town’s classic Main Street. Of course, both shows strictly followed all COVID-19 safety guidelines. Up next, eyes on a holiday something. 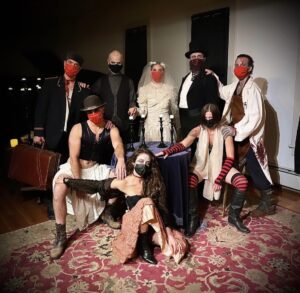 The cast of Colin and Ronnie’s Halloween show “The Ghosts of the Arlington Hotel. [Credit: Colin Cunliffe]

But why? Why try to bring the performing arts out of their liberal, packed-venue comfort zone to a place where most residents have never even seen a musical before? A place where the physical environment and the cultural makeup of the population are drastically unfamiliar?

To Colin, it’s an opportunity to share the arts with families who don’t usually have access. “I think about the little gay kid or the girl whose families are scared to be exposed to art because of what art can bring out in people,” he says. “If we can reach even some of these kids to give a little bit of light and a little bit of hope, that puts a whole new layer onto producing a show than if we were to just present it in New York City.” The current social and political landscape is motivation to use art for a purpose larger than entertainment. “It’s just a little more dire for me now.”

And on a personal level, it’s a way for Colin to connect his outdoorsy Colorado childhood to his city-dwelling performer lifestyle—the two halves of himself are finally collaborators.

Our animated conversation about the future of the arts rolls on as the world simmers in post-election purgatory, awaiting results of what feels like a survey on the goodness of humanity. Uncertainty is everywhere. But Colin knows he’s exactly where he should be at this moment in time. There’s no denying that his hopefulness is infectious.

Maybe moving to the woods and giving our inner rainbow-haired troll dolls space to breathe would do us all some good.