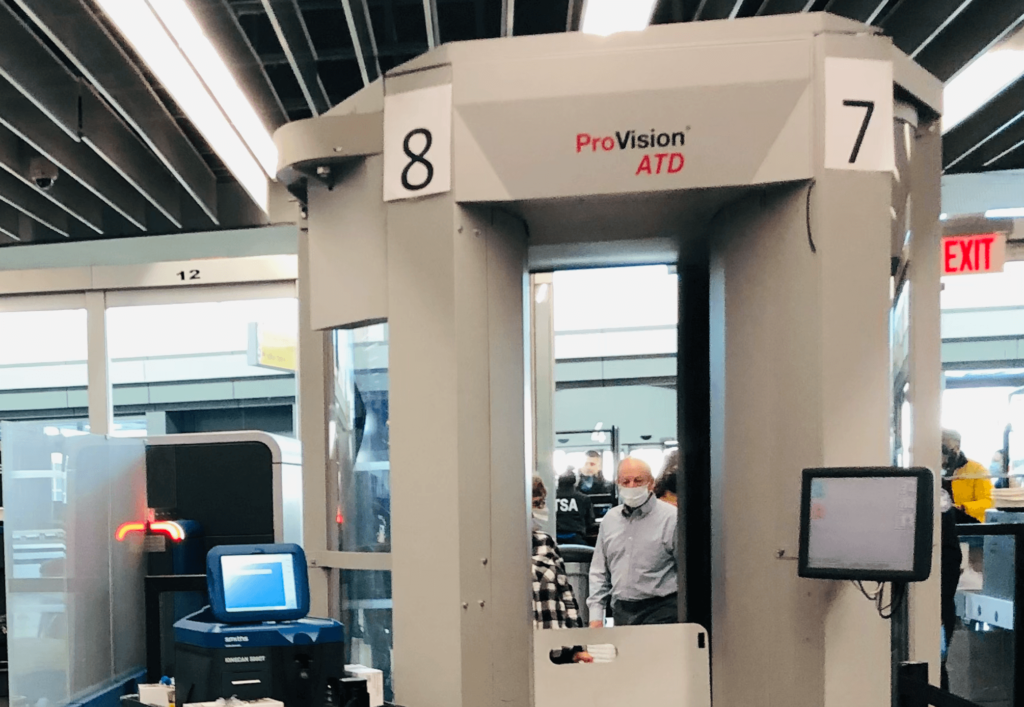 TSA may ask to see inside your bag—imagine if they asked to see your genitals. This airport TSA body scanning machine uses pink and blue gender identifiers for passengers. (Credit: Michelle Mackey at John F. Kennedy International Airport)

Airport security checkpoints are one of the most dreaded parts of flying—especially for transgender people. In August 2019, ProPublica published an article investigating the experiences of transgender and gender nonconforming people during the Transportation Security Administration’s Precheck searches at airports. The story builds off an incident at Florida’s Fort Lauderdale-Hollywood International Airport where a woman known only as “Olivia” was harassed and traumatized. Reporters Lucas Waldron and Brenda Medina identify Olivia by her middle name for fears of negative social and psychological consequences that may come with the public’s knowledge of her as transgender.

The story examines a flawed security system that identifies people’s genders as “pink” or “blue” according to the buttons on body scanners. In labeling passengers as one or the other, this technology is disregarding a spectrum of identities and triggering false alarms in the screening process. The machines, which rely on an algorithm to identify breasts in females and penises in males, have a disproportionately negative effect on the transgender community. The scanning process outs them in public places, prompting further investigations by officers with deficient transgender awareness training.

In this case, Olivia was given a choice between submitting to a male officer pat down or being barred from her flight and escorted out of the terminal. Olivia offered to show her genitals to gain admittance, and in the following moments her skirt was around her ankles. Her dignity was shattered.

It’s a common ethical argument among journalists that those whose names are directly linked to their words will be more likely to tell the truth. But for sensitive sources like transgender people, it’s possible that the opposite is true. Although Olivia is not held completely accountable for her words, she is likely more inclined to provide a candid and truthful account of her experience when granted anonymity because she won’t face the often brutal backlash that unfortunately comes with being transgender.

But just because anonymity is deemed appropriate in one circumstance, readers should be skeptical of the choice to keep TSA officers anonymous later on in the story. Waldron and Medina granted anonymity to current TSA officers in interviews and online posts regarding proper procedures and training. In the end, there was no retribution or acceptance of fault from the airport. Olivia was left with a lasting memory of the event and heightened anxiety every time she travels.

The use of anonymous sources in journalism is a subject of varying contention for many publications. At ProPublica, their code of ethics outlines a dedication to identifying all the sources of their information and “shielding them with anonymity only when they insist upon it and when they provide vital information—not opinion or speculation; when there is no other way to obtain that information; and when the source is knowledgeable and reliable.”

The reporters of this story included a mixed bag of sources. They recruited experts, including Harper Jean Tobin, director of policy at the National Center for Transgender Equality, along with the TSA press secretary, Jenny Burke, previous TSA administrator, Peter Neffenger, and spokeswoman for L3Harris Technologies, Jennifer Barton. These experts along with transgender victims Terra Fox and Allister McGuire spoke with their full name on record. The main source, Olivia, and a number of TSA officers remained anonymous.

Considering ProPublica’s Code of Ethics, Olivia’s insistence on anonymity is understandable. Transgender issues are often sensitive and misunderstood. But was she the only way to obtain the information?

Waldron and Medina offer two other named transgender people later in the story, who support Olivia with a brief account of their similar TSA Precheck experiences. Terra Fox, a transgender woman, talks about when she was instructed to show TSA officers her genitals. Allister McGuire, a transgender man, was forced, in a private room, to remove his chest binder so that TSA officers could examine his breasts. But neither of them filed a complaint.

ProPublica’s reporters likely felt they had more detailed and reliable evidence in Olivia’s case, who did file a complaint. But I also wonder why the reporters chose Olivia when there were clearly other transgender people willing to go on the record about their experiences. In this example, was choosing an anonymous source to lead the narrative another way of highlighting the intense discrimination and humiliation faced by the transgender community?

Giving Olivia an alias does add to the story, as it makes readers better aware of the shame that members of the transgender community experience as a result of society’s gender norms. She was clearly traumatized by the event, and as a result wanted to speak out about it—but that didn’t outweigh her fear of being publicly identified as transgender.

No matter the story, a reporter must weigh the pros and cons of granting anonymity and determine how it will affect the credibility of their article. In this case, Olivia’s full name wasn’t critical to the reader’s understanding of the events. The reporters provide a detailed description of her life, including her reason for traveling, her career as a lawyer and her relationship with her significant other, Marguerite. Her claims were also reinforced by the inclusion of eerily similar accounts from other transgender travelers.

In the story, the reporters explain that Olivia knows this information from first-hand experience. It’s clear that her motivation for telling the information is related to the lasting trauma inflicted by the experience. Her account is also corroborated by her official complaint, the letter of response from the TSA, and her FOIA request for evidence that the TSA reviewed her allegations. She’s clearly a reliable source, despite a missing first and last name.

The article exposes posts and comments made in a private Facebook group for TSA employees. In the group, they criticize the agency’s training process for addressing transgender people. The comments are presented as a screenshot with the users’ names blacked out. Quotes from current TSA officers also provide insight into their own anxiety toward offending transgender people and the discreet ways some try to combat it. In this case, it’s understandable that as current TSA employees, these people would likely fear for their jobs if their comments were made public.

Eyewitness TSA employee accounts are vital in creating a more balanced and unbiased story. But I question whether or not these anonymous workers were truly the only source of information. As stated in the article by previous TSA administrator Peter Neffenger, “It’s a big organization; it’s got a lot of turnover.” And just because they were in a private Facebook group doesn’t mean they actually work for the TSA. Reporters could have spoken to previous employees who would have had the same training and been willing to go on the record.

However, the inclusion of comments from Neffenger and Press Secretary Burke help to sufficiently elaborate on the perspective of the TSA. It somewhat offsets the anonymous comments by showing that the journalists were responsible in their gathering of information from appropriate sources.

Using anonymity in journalism is a tightrope walk. ProPublica has an ethical obligation to protect vulnerable resources. They also have a responsibility to readers in seeking out reliable sources that are able to corroborate the story with relevant information to support their anonymous claims. Maintaining that balance is key keeping their readers’ trust.