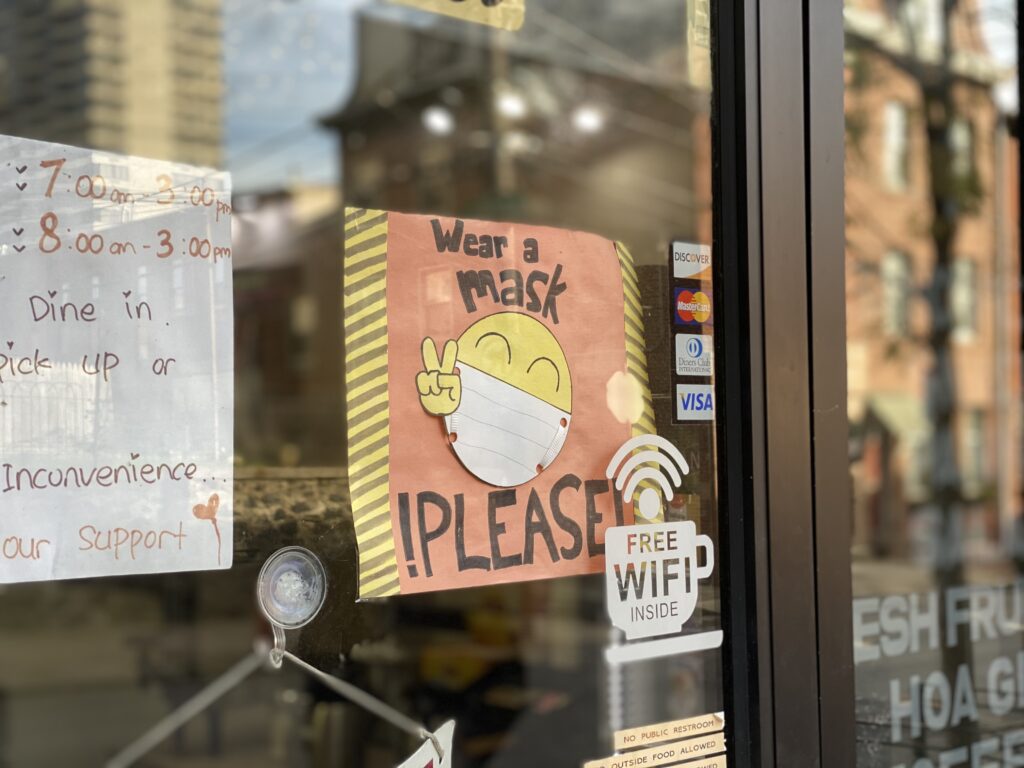 Most businesses now require masks upon entry. Not everyone is eager to comply. [Credit: Anna Wesche]

(PHILADELPHIA) — In a recent article for The New Yorker, Bill McKibben demonstrates that the passion of personal politics doesn’t always discredit a journalist’s writing. Sometimes it strengthens it.

A well-known environmentalist, McKibben is the founder of grassroots climate campaign 350.org, as well as the author of “The Climate Crisis,” The New Yorker’s environment-focused newsletter. His article, “An Anonymous Anti-Masker, Deep in the Vermont Woods,” isn’t about the climate crisis — though he can’t help but mention it a few times — but rather, McKibben’s pursuit of truth in the COVID-19 era. With this subject, McKibben has simply shifted his scope from one public health crisis to another.

McKibben begins in his comfort zone: nature. He sets the scene by describing a peaceful two-hour-long hike through the Vermont wilderness, unbothered by society. But it’s quickly interrupted by a series of anonymous anti-mask flyers posted along the trail. The essence of the story begins here, as McKibben explains where the flyers lead him — a web of misinformation. The article becomes a denunciation of those spreading false information about the pandemic.

McKibben’s stories are usually opinionated and this piece is no exception. Those familiar with the writer’s left-leaning politics won’t be surprised by the candor of his article. Some may even find it entertaining. He calls conservative network Fox News a hub of nightly “shouting.” He calls President Trump’s potential removal from office in November a “happy event.” He reminds his readers that, aside from being assailed by global warming, we are equally imperiled by “rampaging ignorance” from those who spread misinformation on COVID-19. But does McKibben’s anti-conservative rhetoric skew his argument? Though his agenda may be better served by limiting his critique of the right, his article doesn’t cross an ethical line in its pursuit of public health advocacy.

The article maintains its integrity because McKibben sticks to the facts. He uses Vermont as an example of what happens when states follow pandemic guidelines, adopting the collective “we” as he describes how he and fellow Vermonters have joined in “social solidarity.” It’s a good comparison to prove his point. At the time the article was published, Vermont had no COVID-19-related hospitalizations. But McKibben understands that the glorification of misinformed views is not confined to Vermont’s right-wing. According to McKibben, past measles outbreaks in the state have often originated in school districts populated with people who would “count themselves as environmentalists and progressives,” but don’t trust doctors or vaccines. He acknowledges that the country’s leisurely circulation of false information is not created by conservatives alone. This shows readers that McKibben is willing to provide different sides to the story, even ones that negatively portray his own progressive left.

McKibben’s article may be opinionated, but no ethical boundaries are crossed as he advocates that “science is good.” His outspokenness strengthens his credibility because he’s able to back up his statements with facts. McKibben’s masterful use of facts pointedly admonishes the subjects of his article: those who reject those same facts.