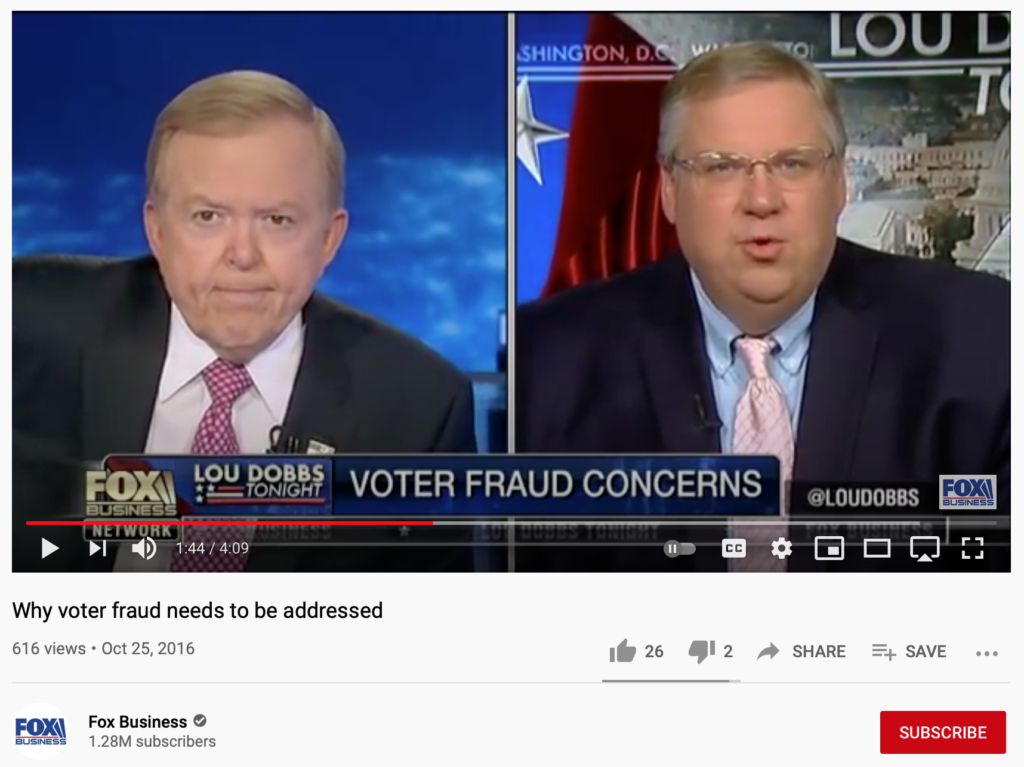 Commentary: Can a Fake News Aficionado Be a Journalist?

J. Christian Adams is a double-sided coin in the pocket of our dueling democracy. A former member of the United States Department of Justice and a current contributor to PJ Media—a right-wing, opinion-based news blog—Adams has been called a “vote fraud crusader” by NBC News, and labeled a “conspiracy theorist” and “lawyer who specializes in election year alarmism” by the Philadelphia Inquirer. It’s little surprise he is a frequent guest on Fox News, brought on most recently to discuss his role as a member of Trump’s Presidential Advisory Commission for Election Integrity, aka the Voter Fraud Commission (now disbanded).

Over the years, Adams has made some shocking claims. He decried an “alien invasion” at the ballot box in 2016 and 2017, and has sued counties in an attempt to force them to purge their voting rolls. As part of his “invasion” reports, he posted online the personal information—including social security numbers—of thousands of registered voters he claimed had committed fraud. While there is little evidence that voter fraud exists in any substantive fashion, according to publications including NBC News, The Guardian, and Business Insider, Adams continues to sound the alarm, calling those who question it “flat earthers.”

Putting aside whether any of his claims are true, can Adams be considered a journalist? After all, he appears on Fox News, where his accusations are given air time and go unchallenged by hosts. He muddies up the qualifications for being a journalist by touting falsehoods on a network at odds with the truth.

According to the Pew Foundation’s four Core Principles of Journalism, a journalist can be broadly defined as having an obligation to the truth, staying loyal to the public, verifying all the facts and remaining as unbiased as possible. While Pew is a respectable media organization, that doesn’t mean everything it says is law. There are legions of journalists who are clearly biased—like Glenn Greenwald, who broke the Edward Snowden-NSA leaks story for the Guardian in 2013. Greenwald makes no pretensions of being an objective journalist. In fact, in a 2016 interview on New York Public Radio, he discussed how reporters hide behind what he calls “false objectivity,” especially in political coverage.

Adams’ bias doesn’t disqualify him from the journalism tribe. So what about Pew’s first principle: an obligation to the truth? If Adams, Fox News, and a majority of their audience accept that mail-in voting corruption is true, it would—by Pew’s standards—qualify as journalism. If truth is merely “an accepted judgement, proposition or idea,” as defined by Merriam-Webster, then even information that has been proven false can qualify as journalism in the proper context. Adams and Fox News appear to believe the truth is open for interpretation. He could still technically be a journalist.

Pew’s second principle is a loyalty to the public. But the “public” could be your local community, it could be a family of four, or a political party. A loyalty to the public doesn’t explicitly forbid journalists from cherry-picking their audience. Outlets such as Fox News and CNN, while acting as overseers of the government, are also privately owned businesses. Not only does targeting specific members of the public get their news in front of interested eyes, it makes them money. During the third quarter of the 2020 election year, Fox News averaged 3.5 million viewers between 8 p.m. and 11 p.m., to finish No. 1 in basic cable while MSNBC placed second with an average of 2.1 million viewers. Does the desire to make money precede these networks’ dedication to fair reporting? When does a “loyalty to the public” stop being journalism and start becoming calculated ad placements? These questions form the nebulous area where Adams thrives.

Adams has made a career for himself promoting his false narrative of voter fraud. His loyalty lies with Fox News, who contributed to that success, and their viewers—who are members of the public.

Where Adams conflicts with Pew is on the principle of fact-checking. Adams’ claims have been discredited on a number of occasions. He was forced to issue an apology for falsely characterizing American citizens as undocumented frauds. Politifact and ProPublica have debunked him, after he inflated data by nearly half in his report on the number of unaccounted mail-in ballots.

But Adams isn’t the only journalist whose facts have been disproven. In 2019, CNN printed a correction after key dates disproved their story that Donald Trump Jr. had advanced access to the WikiLeaks email archive. Rolling Stone and reporter Sabrina Erderly faced defamation lawsuits for their 2014 “A Rape on Campus” article, which purported a disturbing sexual abuse story that turned out to be completely fabricated.

In theory, fact-checking is a hallmark sign of a credible journalist. By corroborating a story with relevant sources, expert opinions, and researched facts, a journalist nails down the truth and leaves little room for poking holes. But with so many calamitous occasions, is fact-checking really seen as a necessity in defining a journalist?

The qualifications to be a journalist are so subjective that misinformers and pot-stirrers like Adams are given a platform despite being unreliable and dangerous. His appearances on major cable news stations like Fox News bring into question the integrity of these media organizations, who have allowed such unethical reporting to masquerade as reliable journalism.

The standards for being a journalist can be interpreted in many different ways. It’s up to the media to be responsible in deciding whether someone like Adams should speak to their audience.